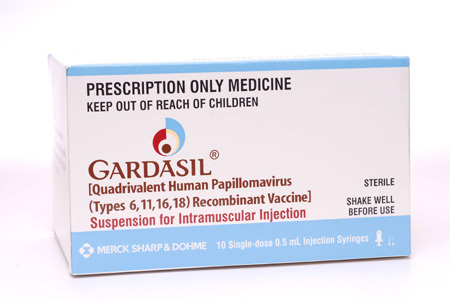 First their hands and feet feel go cold. Then they go pale and cannot move. Some convulse and fall to the floor.

In El Carmen de Bolivar, near the port of Cartagena, dozens of teenagers have experienced similar symptoms. Some have even lost consciousness.

“They vaccinated me in May and I started fainting in August. My legs became heavy and I couldn’t feel my hands anymore. When I woke up, I was in the hospital,” recalled 15-year-old Eva Mercado.

She passed out seven times in a month.

For most of the families affected in this town of 67,000, there is no doubt about what is causing the problem.

They place the blame squarely on a vaccination campaign against HPV, one of the most common sexually transmitted diseases, which can trigger cervical cancer.

Due to hundreds of adverse reactions to cervical cancer vaccine reported in Japan one year ago, teenagers were injured and disabled by Cervarix and Gardasil HPV vaccination campaigns are now continue to voice their disdain with efforts to permanently end the government’s subsidy program for the toxic injections. In July 2013, their health ministry issued a nationwide notice that cervical cancer vaccinations should no longer be recommended. Japanese teens who received the vaccines were confined to wheelchairs with damage to their brains and spinal cord. 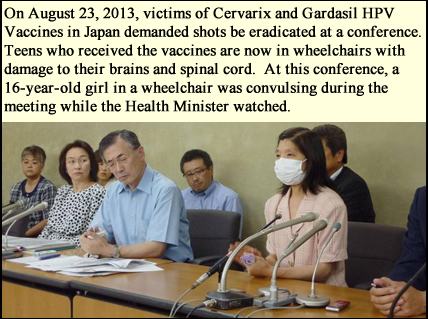 Thousands of media outlets in the U.S. are now pointing to worldwide incidents involving the HPV vaccine and demanding answers from the FDA, CDC and the U.S. Department of Health and Human Services why the same vaccines are permitted in the United States.

The city’s modest Nuestra Senora del Carmen hospital has been overwhelmed by a surge of unconscious teenage girls being wheeled through its doors.

Panicked fathers bring their daughters to the facility aboard their motorcycles, using the town’s dirt roads.

Doctors search, in vain, for possible cases of hypoglycemia or drug abuse, but everything appears to point to the vaccine.

According to hospital official Augusto Agamez, about 370 minors have checked into the facility. There was also one boy among them.

“There is no diagnosis or specific treatment,” Agamez told AFP, stressing that the hospital was also helping families cope with the unknown illness.

When they come to, the young patients learn breathing techniques from nurses.

They also receive saline solution and oxygen. Once back on their feet, the girls go home — until the next spell.

“They brought me to the hospital 16 times last month,” said Beatriz Martinez.

For the 15-year-old, it all started with headaches and backaches. Then her legs and hands gave in as well, forcing her mother to help her take baths.

The teenage girls affected by the mysterious malaise no longer go outside. Some don’t even leave their homes.

“My daughter is not the same,” said street vendor Jhon Jairo Mercaco, adding that, until now, his daughter had not been hospitalized since birth.

“I am desperate,” said William Montes, a farmer who traveled down a mountain with his two daughters in a hammock to get them treated in town.

Health and political officials all over the world have dismissed reactions to the HPV vaccine and have been trained to delegate blame to psychological illnesses.

The epidemic has grabbed national headlines, and President Juan Manuel Santos has been forced to weigh in.

Insisting the HPV vaccination campaign was safe, Santos suggested the epidemic was no more than a “phenomenon of collective suggestion.”

In the 1980s, clashes pitting government forces against the leftist rebels killed about 100 people here.

US drug giant Merck, which makes the Gardasil vaccine, said it was “confident in the safety profile” of its product. This despite peer reviewed research which cited a lack of evidence for any HPV vaccines in preventing cervical cancer and lack of evaluation of health risks.

“We continue to monitor adverse events reporting and are following this situation closely,” it said in a statement to AFP.

“Merck/MSD will continue to support the ministry’s immunization and monitoring efforts in Colombia.”

Health Minister Alejandro Gaviria was met with boos and burned tires during a recent visit.

While promising a series of measures — gathering data on patients, setting up new tests, providing psychological counseling — the minister stopped short of suspending the vaccinations.

“We have no reason to stop at this time,” Gaviria said.

Those words failed to reassure parents whose family and professional life have been upended by an illness whose origins are still unknown.

“This is not collective hysteria or manipulation. If you see your daughter have these symptoms after a vaccination, what else would you blame?” asked Maria Veronica Romera, the mother of a weakened 13-year-old.

According to Dr. Sotaro Sato, who has examined many cervical vaccine victims, the convulsions, inability to walk, and involuntary hand and toe movements are being caused by encephalomyelitis, or the inflammation of the brain and spinal cord.

“Since the vaccines cause autoantibodies against the brain’s neuronal fibers to be produced in many cases, they have triggered demyelinating disorders,” he said, adding they have also induced many cases of cerebral vasculitis.

The marketing of Cervarix, made by GlaxoSmithKlein PLC of Britain, was approved in 2009. This was followed by Gardasil, made by Merck Sharp & Dohme (better known as Merck & Co. in the U.S.), in 2011.

Doctors often reject pleas from their patients’ parents to file reports about adverse reactions, which are needed to obtain compensation from the government.

Dave Mihalovic is a Naturopathic Doctor who specializes in vaccine research, cancer prevention and a natural approach to treatment.