The reason the Islamic State is so free to call Muslims to kill is because they have the book, the theological and religious imperative to do so.

They are confident because they conquer in the cause of Allah.
And their contempt for our weakness is blatant, they call John Kerry “the old uncircumcised geezer” and Obama “the mule of the Jews” while ridiculing him for his ridiculous platitudes about Islam.

In an audio recording distributed widely on social media Sunday, Islamic extremist group ISIS urged attacks on civilians in member countries of the U.S.-led coalition opposed to their violent spread through areas of Syria and Iraq.

In the nearly 42-minute long meandering propaganda speech uploaded to Twitter, ISIS spokesman Abu Muhammad al-Adnani encourages Muslims to kill “disbelievers” in countries, including Canada, currently supporting American and French-backed military action against the group in Iraq “in any manner.” 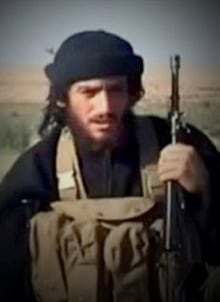 Abu Mohammad al-Adnani, seen in this image grab taken from a video on July 8, 2012, issued fresh threats against Westerners in a speech released on audio. (CBC)

“If you can kill a disbelieving American or European — especially the spiteful and filthy French — or an Australian, or a Canadian, or any other disbeliever from the disbelievers waging war, including the citizens of the countries that entered into a coalition against the Islamic State … kill him in any manner or way however it may be,” said Adnani.

“ISIS represents a threat not just to stability in the Middle East, but to global security,” said Jason MacDonald, the prime minister’s director of communications.

“We will continue to work with allies to push back against this threat. Like our allies we will not be cowed by threats while innocent children, women, men and religious minorities live in fear of these terrorists.”

The Canadian government has not said whether it views the recording as authentic, but the French government appeared to be treating it as authentic, as did SITE, a Washington based think tank that analyzes terrorist groups.

The Harper government has taken a hardline against ISIS. Last week Foreign Affairs Minister John Baird compared the fight against ISIS to the struggles against communism and fascism.

Threats mirror those in beheading videos

Threats made in the audio recording mirror those ISIS has made in other propaganda releases, including during the grisly beheading videos of two American journalists, James Foley and Stephen Sotloff, and British aid worker David Haines.

The United States is building an international coalition to combat the radical Sunni Muslim group, which has seized swathes of territory in Iraq and Syria and proclaimed a caliphate in the heart of the Middle East.

U.S. and French warplanes struck Islamic State targets in Iraq and on Sunday the United States said other countries had indicated a willingness to join it if it goes ahead with air strikes against the group in Syria too.

Adnani blamed Western allies for instigating a war against the terrorist group, and said the ongoing air incursions against ISIS positions in Iraq will be “the final campaign of the crusaders.”

France’s top security official said militants from the Islamic State group had threatened to kill civilians in the coalition of countries arrayed against the extremists, but that he is confident in the country’s security.

Interior Minister Bernard Cazeneuve said Monday “this threat to kill civilians, added to the execution of hostages and to the massacres, is yet another demonstration of the barbarism of these terrorists, justifying our fight without truce or pause.”

He added that “France is not afraid because it is prepared to respond to their threats.”

Unlike other terrorist organizations such as al-Qaeda, ISIS has established a widespread presence on social networks, using highly produced videos and audio recordings in an effort to recruit new fighters from abroad and intimidate those opposed to their murderous agenda.

In his statement, Adnani mocked Western leaders over their deepening military engagement in the region and said U.S. President Barack Obama was repeating the mistakes of his predecessor, George W. Bush.

“If you fight it (Islamic State), it becomes stronger and tougher. If you leave it alone, it grows and expands. If Obama has promised you with defeating the Islamic State, then Bush has also lied before him,” Adnani said, according to the transcript.

Obama, who has spent much of his tenure extracting the United States from Iraq after its costly 2003 invasion and occupation, is sensitive to charges that he is being drawn into another long campaign that risks U.S. soldiers’ lives.

While Obama has ruled out a combat mission, military officials say the reality of a protracted campaign in Iraq and possibly Syria may ultimately require greater use of U.S. troops, including tactical air strike spotters or front-line advisers embedded with Iraqi forces.

Adnani also condemned Saudi Arabia, whose senior Muslim clergy have denounced Islamic State and whose ruling royal family has joined other Arab states in a pledge to tackle militant ideology as part of a strategy to counter the group.

Adnani slammed Western inaction over the conflict in Syria, where President Bashar al-Assad’s forces have been embroiled in a three-year-old civil war with mainly Sunni Muslim fighters. He said the West had “looked the other way” when barrel bombs were dropped and chemical weapons were used against Muslim civilians.

“So know that – by Allah – we fear not the swarms of planes, nor ballistic missiles, nor drones, nor satellites, nor battleships, nor weapons of mass destruction,” he said.