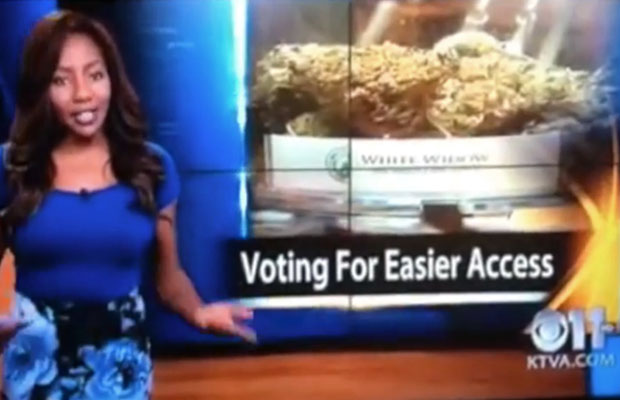 Former Alaskan reporter for Anchorage CBS affiliate KTVA Charlo Greene quit her job live on air last night, after reporting on a November ballot initiative to legalize the recreational use of pot in the state, then outing herself as the owner of The Alaska Cannabis Club she had just reported on.

Following her segment, Greene stunned viewers with, “Now everything you heard is why I, the actual owner of the Alaska Cannabis Club, will be dedicating all of my energy toward fighting for freedom and fairness which begins with legalizing marijuana here in Alaska.”

She finished up with, “And as for this job, well, not that I have a choice but, f**k it, I quit,” before shrugging and walking off camera.

The other reporter was left to try and stutter her way through to the next break. The station sent out this Tweet, apologizing for the language and adding that Greene was terminated.

Do they watch their own broadcasts? Pretty sure she quit.

According to Fox News, a spokeswoman for the opposition initiative Big Marijuana Big Mistake has previously complained to the station’s management twice that they felt Greene’s coverage of the marijuana ballot initiative was biased.

From the project summary:

I’m Charlo Greene, the president and CEO of the Alaska Cannabis Club – Alaska’s only legal medical marijuana resource. I just quit my news reporting job on live TV to announce that I am redirecting all of my energy toward helping to end a failed drug policy that has ruined the lives of far too many Americans.

Ballot Measure 2, the initiative to Regulate Marijuana Like Alcohol in Alaska,  isn’t just about marijuana in the Last Frontier, it’s about keeping the ball rolling on NATIONAL legalization. Imagine, if after Colorado and Washington have legalized recreational marijuana and are offering the rest of the world a positive outlook on what ending marijuana prohibition can do, Alaskan voters fail to continue moving our nation in the direction toward freedom and fairness. There’s no doubt that will impact every other state, national and international marijuana reform effort. Americans with common sense don’t want that.

Help us to keep that from becoming a reality.