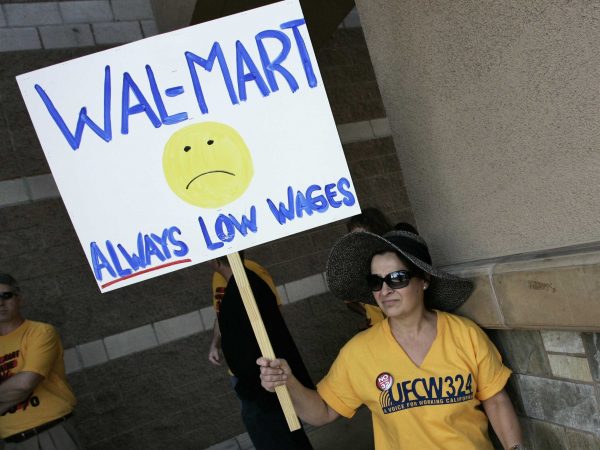 Given the behavior of Wal-Mart in recent years, one would be justified in wondering whether or not the retail giant is actually operating a think-tank tasked with coming up with new ways to make its employees’ lives devoid of any semblance of dignity and reasonable living standards. Indeed, Wal-Mart is doing its part in the global fight against worker’s rights and the living standards of the world’s population as well as attempting to assist in the implementation of scientific feudalism variety as the chosen system of the planet.

As if its absurdly low wages, atrocious labor practices,  and generally dehumanizing policies were not enough, Wal-Mart has now decided to make changes to its “dress code” that will force already financially strapped (to say the least) employees pay for their own work clothes.

While the issue may not sound like such a bad practice, Wal-Mart has been providing work “uniforms” and/or work clothes for its employees in the past. Of course, even after the new changes, Wal-Mart employees will be forced to comply with the Wal-Mart “dress code.” However, this time, they will be forced to pay for the clothes out of their own pocket. For an employee that already makes minimum wage with no benefits and is treated like garbage by Wal-Mart’s labor policies, the extra money it will take to buy new sets (or even just one set) or polo shirts, khakis, and skirts will cut into the worker’s budget significantly.

As one might suspect, those employees who have been attempting to fight for some modicum of worker’s rights and to force Wal-Mart to the bargaining table have once again reacted with anger at Wal-Mart’s decision.

While some question whether or not Wal-Mart’s new dress code policy is legal since the Wal-Mart vest will be retained, the reality is that the practice is most likely. Since Wal-Mart actually pays for the vest and since the new policy is only considered a “dress code,” workers will most likely be forced to pay for the changes.

As Judy Conti of the National Employment Law Project told the Guardian “When an employer selects clothing you could wear anywhere else, they are not required to pay for it. Black or khaki pants – it doesn’t come more basic than that. White or navy blue shirt: now, maybe you don’t wear white or maybe you don’t wear navy, but I’ll bet you wear one of them.”

Of course, Wal-mart’s new policy amounts to a “uniform but not really a uniform” policy. Anyone who has ever worked for a large corporation like Wal-Mart will understand full well how loopholes in law can be exploited to shift more of the cost of business on to the backs of employees.

Adding insult to injury, Wal-Mart is offering a 10% discount to offset the estimated $48 (after discount) cost of new dress code requirements if the new items are purchased in its store.

It should not go un-noticed that Wal-Mart has proven its power over the working public time and time again. While other companies may at least attempt to hide their unsavory labor practices, Wal-Mart has refused to back down despite much negative press as of late. In fact, the corporation continues to march forward with its Dickensian philosophy.

While none of the information contained in this article is shocking, it is nonetheless indicative of the behavior of what has come to be seen as one of the most heartless, greedy, and oppressive corporations across the world.

Walmart has taken advantage of political connections within the US government, anti-American trade deals, and a worldwide economic depression to expand its own retail empire and further exploit the average worker, producer, and consumer.

Below is a list of organizations who are attempting to fight Walmart’s abuses of their workers and their devastation of small towns.

In addition to these organizations and the fight for greater worker protection and proper labor and trade policy, however, one of the most powerful methods of fighting Walmart is the power of the purse. If you want to help stop the systematic abuses of the Walmart corporation, it is up to you to simply stop shopping there. Walmart cannot survive without our dollars, no matter how poorly they treat their workers or their producers.

Organizations actively opposing Walmart’s abuse of workers: (NOTE: If none of these organizations appeal to you, feel free to start your own!)

You can also view the documentary Walmart: The High Cost of Low Prices – on YouTube.

Brandon Turbeville is an author out of Florence, South Carolina. He has a Bachelor’s Degree from Francis Marion University and is the author of six books, Codex Alimentarius — The End of Health Freedom, 7 Real Conspiracies, Five Sense Solutions and Dispatches From a Dissident, volume 1and volume 2, and The Road to Damascus: The Anglo-American Assault on Syria. Turbeville has published over 400 articles dealing on a wide variety of subjects including health, economics, government corruption, and civil liberties. Brandon Turbeville’s podcast Truth on The Tracks can be found every Monday night 9 pm EST at UCYTV.  He is available for radio and TV interviews. Please contact [email protected]