Is it looks?  Is it a charming personality?  Is it compatibility?  No, it isn’t any of those things.  According to a Pew Research Center study that was just released on Wednesday, “a steady job” is the number one thing that women are looking for in a husband.  And considering the fact that the labor force participation rate for men has been falling for decades, it should be no surprise that the marriage rate has been declining as well.  In fact, as I wrote about the other day, the marriage rate in the U.S. is at a 93 year low and single Americans make up more than half the population for the first time ever.  This is a very disturbing trend, but it is not likely to change any time soon.  In fact, our economic problems are probably only going to get worse from here.  So as the pool of “eligible bachelors” continues to shrink, what are women going to do?

The chart that I have posted below shows how the labor force participation rate for men has been declining ever since the 1950s.  What this means is that the percentage of men that are employed or that are looking for employment has been steadily falling for a very, very long time… 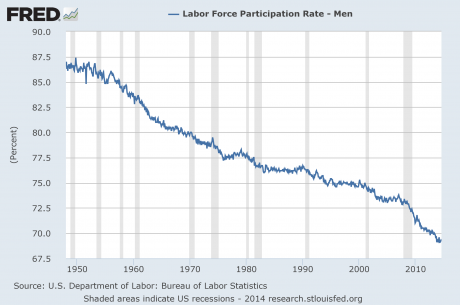 This trend has been particularly pronounced among young men.  Not only are fewer young men of marriage age working, wages for that group are way below where they used to be once you account for inflation…

As the share of never-married adults has climbed, the economic circumstances faced by both men and women have changed considerably. Labor force participation among men—particularly young men—has fallen significantly over the past several decades. In 1960, 93% of men ages 25 to 34 were in the labor force; by 2012 that share had fallen to 82%. And among young men who are employed, wages have fallen over the past few decades. For men ages 25 to 34, median hourly wages have declined 20% since 1980 (after adjusting for inflation). Over the same period, the wage gap between men and women has narrowed. In 2012, among workers ages 25 to 34, women’s hourly earnings were 93% those of men. In 1980, the ratio was less than 70%.

The new Pew Research survey findings suggest that never-married women place a high premium on finding a spouse with a steady job. However, the changes in the labor market have contributed to a shrinking pool of available employed young men.

This is making things very tough for both young men and young women that want to get married.

Young men cannot find the jobs that they need to attract a mate, and young women are facing a shortage of men that they consider to be “marriage material”.

In fact, one survey found that a staggering 75 percent of all American women would have a problem even dating an unemployed man…

Of the 925 single women surveyed, 75 percent said they’d have a problem with dating someone without a job. Only 4 percent of respondents asked whether they would go out with an unemployed man answered “of course.”

“Not having a job will definitely make it harder for men to date someone they don’t already know,” Irene LaCota, a spokesperson for It’s Just Lunch, said in a press release. “This is the rare area, compared to other topics we’ve done surveys on, where women’s old-fashioned beliefs about sex roles seem to apply.”

Of course this is not the only factor that is contributing to the decline of marriage in the United States.

The truth is that our young people are being trained to not value marriage and family as much as young people in America once did decades ago.

These days, many people are content to stay unmarried and enjoy “the singles lifestyle” indefinitely.

But is it good for the stability of our society to have far fewer marriages and families?

When you look at the hard numbers, they truly are alarming.  The following excerpt comes from my previous article entitled “The Economics Of Marriage“…

According to a startling new study conducted at Bowling Green University, the marriage rate in America has fallen precipitously over the past 100 years.

That is not just a new all-time low, that is a colossal demographic earthquake.

That same study found that the marriage rate has fallen by an astounding 60 percent since 1970 alone.

As a result, U.S. households look far different today than they once did.

Back in 1950, 78 percent of all households in the U.S. contained a married couple.  Today, that number has declined to 48 percent.

A lot of these unmarried young adults are not even living on their own.

In fact, as I wrote about just recently, an astounding 31.1 percent of all U.S. young adults in the 18 to 34-year-old age bracket are currently living with their parents.

In the old days, if you were not married and starting a family by the age of 25 people started to get concerned about you.

But now a lot of people think that marriage before the age of 25 is “getting married too young”.

Courtesy of the End of the American Dream blog.