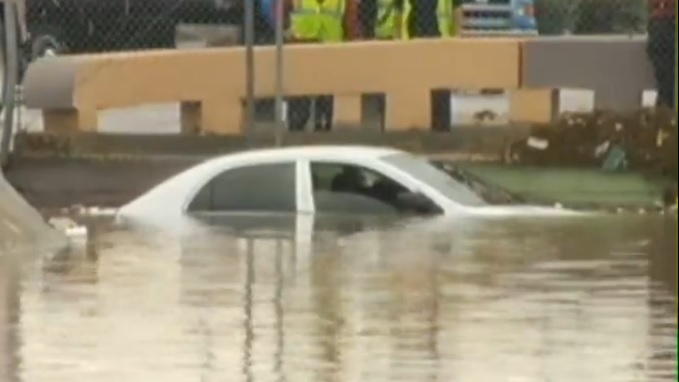 This Monday, 64-year-old Constance Manzanares drowned after she became trapped in her car in a drainage canal, in Northeast El Paso, Texas.

When police arrived on the scene, there were a number of young men in the water attempting to save the victim and rescue her from the car.

However, witnesses say that police threatened the young men with arrest and chased them away from the area, and then failed to make a rescue attempt of their own, allowing the woman to drown.

According to an anonymous witness who was interviewed by local KFOX14, the woman may be alive today if the police had never showed up in the first place.

“They went and tried to help this lady, they tried to help her, but the police said they can’t, they were yelling and everything, I don’t wanna say nothing bad about them, I know they give good service here and everything, but I said ‘Oh, my God….They hit the window on the driver’s side, and she tried to get out but there’s a fence right there, and she couldn’t get out. So she had all that weight with her and all the water inside. The men got scared, they didn’t want to leave, they were mad, so they got scared, people were yelling so they had to leave before they got arrested,” the witness said.

Many other witnesses who did not wish to be named or appear on camera did confirm that people who could have saved this woman’s life were chased away by police.  It is interesting that not one of these witnesses want to appear on camera, and it is likely that many of them fear police retaliation for speaking out about what they saw.

According to multiple witnesses, the police stood around and did nothing for nearly 15 minutes before allowing emergency crews to move in.

“There were ambulances, there was the Fire Department, helicopters, airplanes, I said ‘Oh, my God, they’re not doing anything about it,’ so she passed away,” the witness told reporters.

“They assumed she was dead, but I don’t know. Nobody was there to say if she was dead; that’s why they went to try and help her, we thought they were going to rescue her or come and do something, CPR, take her out, something, they have the tools, everyone had the tools, but they didn’t do anything. Nothing, they didn’t even touch the water.  It’s so sad. If it was my mother or my sister or someone, I would’ve gone and tried to rescue her,” she added.

Some witnesses reported that the officers were telling the group of rescuers that they had to get away from the car and out of the water, “for their own protection”, or they would be arrested.  The police department has refused to comment on the woman’s death, saying only that they are investigating the accident.