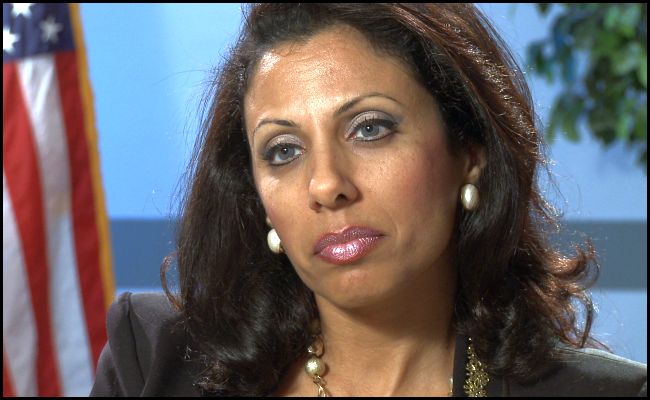 Friday morning an extremist Muslim walked into an Oklahoma food processing plant and beheaded a former coworker. He was making his way around the plant looking for more victims when he was shot and stopped dead by an armed company official. Like the 2009 shooting at Fort Hood by crazed Muslim extremist Nidal Hassan, the Oklahoma incident is being investigated not as terrorism, but as workplace violence.

Sell gold coins, make the shape of a gun with your finger, drink raw milk, or believe in views opposed to the status quo and you’re a terrorist. Behead someone because they are not the same religion as you and that’s workplace violence. This is the state of affairs in today’s politically correct and hyper-sensitive America.

There are 1.2 billion Muslims in the world, and as noted by Lebanese-born journalist Brigitte Gabriel not all of them are bad. But as Gabriel so succinctly highlights in the video below, estimates suggest that 15% to 25% of them are extremists who would, absent the law and order under which we live in America, like nothing more than to behead, torture, rape and kill as many non-believers as possible.

In the video below, Brigitte Gabriel responds to a question from a Muslim woman who first claims that there is a war against Islam and then asks how we can win such a war without addressing it ideologically.

Gabriel’s response is nothing short of epic – and those in attendance respond to her views accordingly.

You don’t want to miss this one.

We were not here to bash Muslims. You are the one who brought up the issue about ‘most Muslims’ not us. But since you brought it up, allow me to elaborate…

There are 1.2 billion Muslims in the world today. Of course not all of them are radicals. The majority of them are peaceful people. The radicals are estimated to be between 15% and 25% according to all intelligence services around the world… you’re looking at 180 million to 300 million people dedicated to the destruction of Western civilization.

On September 11th we had 2.3 million Arab Muslims living in the United States. It took 19 radicals to bring America down to its knees.. the peaceful majority were irrelevant. So for all our powers of reason and us talking about peaceful and moderate Muslims, I’m glad you’re here.

But where are the others speaking out?

You stood there to make a point about peaceful moderate Muslims… It is time we take political correctness and throw it in the garbage where it belongs.

The fact is that America is the land of the free, where it is our God-given right to practice the religion of our choice. The problem with Islam, it seems, is that there is a core belief among many of its followers that it cannot work with Western civilization. And that belief does not come from Western civilization itself, but rather, those who follow the word of the Prophet Mohammed.

Joe Wurzelbacher penned a commentary on this idea of “moderate” Islam at Joe For America in which he brings up exactly the point Birgitte Gabriel was trying to make. If moderate Muslims are so moderate and believe in peace, then where are they? Why don’t we hear from them in droves? Aren’t there supposed to be about 900 million of them out there somewhere?

You sit around and listen to the media talk about “moderate” Islam and how the vast majority of Muslims are against the violence and radical ideology? Really?

No, friendo, these are the backsliders who know they should be right there with these Islamo-Nazis – fighting Jihad wherever they find the Infidels.Their religion compels them and even though the best they can do is stay silent, make no mistake – they want it and they’re part of it – their shut mouths are the consent of cowards.

Full Article: The Battle for America: I’m Drawing a Line in the “Moderate” Sand!

Western civilization has, like it has with scores of other religions, tried to accommodate the belief systems of Islam. It seems, however, that Islam wants no part of it, and as Joe notes, the religion itself compels them to behave exactly how they’re behaving.

Americans have lived in peace among millions of other Muslims for decades. Our ideology hasn’t really changed.

It is not Americans that wanted this war with Islam. Rather, it is Islam that wants to destroy American and Western belief systems. In a recent article titled Barbarians in our Midsts Holly Deyo relates a story shared by a friend of her’s that showed just how peaceful and tolerant some Muslims can be:

After the groceries were purchased, Patty wandered outside for a newspaper. As she dropped coins in the vending machine and retrieved the latest Courier Mail, three Muslim men accosted her on the sidewalk. One of the three stuck his face right in hers and began to verbally harass her. Patty looked around for Mike, but he was 150 yards away unaware of her predicament. When she demanded to know what he wanted, this Muslim began clucking in her face.

What the heck was up with that?

Patty said his clucking indicated disgust. This was very unnerving for a woman seemingly alone and literally defenseless. The normally unflappable Patty sensed danger and fled back inside Coles.

There are countless stories of such harassment of Westerners. And the unbelievable thing about it is that this is happening in Western countries, not somewhere in the middle east.

The more we see of what extremist Islamists are willing to do for Allah, the more we begin to understand that there is no peaceful solution.

If Muslim clerics and followers living in America and abroad feel so strongly about their religion of peace, perhaps it’s time they stand up against the extremist factions rather than sitting back and playing the victim.

If there are, in fact, two factions of Islam, then it is time for followers of this religion to make a clear separation between the two, because right now it sure seems like it’s all one in the same.

We don’t want to be at war with Islam. But if Islam brings war to our shores, our places of our work, our schools, or our homes, then we will (and must) respond in kind.