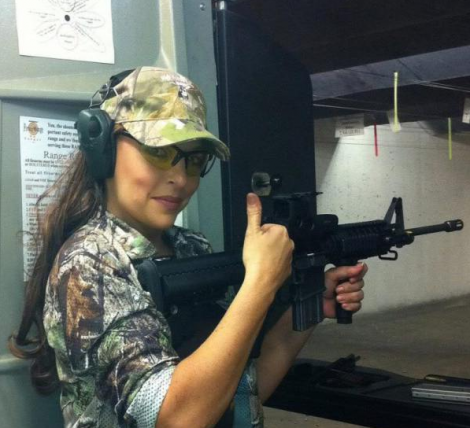 An Arkansas gun-range owner has just declared her own jihad: her business is a Muslim-free zone.  Jan Morgan is a Second Amendment advocate and public speaker, who also happens to own a gun range. Morgan will definitely receive publicity/notoriety as she has just vocally declared that her Hot Springs, Arkansas gun range is off-limits to Muslims.

Some compare this to the right to have a gun-free business. Alternatively, others compare it to the baker who didn’t want to make cakes for a gay wedding, but was forced to anyway.

Morgan posted the following 10 reasons on her website, JanMorganMedia.com.

The Gun Cave Indoor Shooting Range is now a a MUSLIM FREE ZONE.

To understand why I arrived at this decision, you must first take in to consideration the nature of my business.

This is not a coffee and donut shop. This is a live fire indoor shooting range. People come here to buy, rent, and shoot lethal weapons.

In the range, people are shooting guns in close proximity to each other, so my patrons depend on me and my discretion regarding who I allow to shoot beside them.

One mistake in judgement on my part could cost innocent people their lives.

The primary reasons I do not want muslims shooting at my range are listed:

1) The Koran (which I have read and studied thoroughly) and (which all muslims align themselves with), contains 109 verses commanding hate, murder and terror against all human beings who refuse to submit or convert to Islam. Read those verses of violence here.

2) My life has been threatened repeatedly by muslims in response to my publication of those verses from their Koran. Why would I want to rent or sell a gun and hand ammunition to someone who aligns himself with a religion that commands him to kill me?

This is more than enough loss of life on my home soil at the hands of muslims to substantiate my position that muslims can and may follow the directives in their Koran and kill here at home.

4) Two muslims walked in to my range last week with allah akbar ring tone and message alert tones on their smart phones. They spoke very little english, one did not have proof of U.S. citizenship, yet they wanted to rent and shoot guns.

Their behavior was so strange, it was unnerving to my patrons. No one would enter the range to shoot while they were there. Some of my customers left.
(can you blame them?)

5) * Muslims, who belong to and, or, support ISIS, are threatening to kill innocent Americans.

* Muslims, who belong to or support AL Qaeda, are threatening to kill innocent Americans.

* Muslims who belong to or support HAMAS are threatening to kill innocent Americans.

6) I have a federal firearms licence… The ATF informed us when we received the license that if we feel any reason for concern about selling someone a firearm, even sense that something is not right about an individual, or if we are concerned about that persons mental state, even if they pass a background check, we do not have to sell that person a gun.

In other words, a federal agency has given us this kind of discretion for service based on the nature of the business. I can and have turned people away if I sense an issue with their mental state.

Since I have no way of discerning which muslims will or will not kill in the name of their religion and the commands in their koran…I choose to err on the side of caution for the safety of my patrons.

8) On the issue of religious discrimination:

I view Islam as a theocracy, not a religion. Islam is the union of political, legal, and religious ideologies. In other words, law, religion and state are forged together to form what Muslims refer to as “The Nation of Islam.”

It is given the sovereign qualities of a nation with clerics in the governing body and Sharia law all in one. This is a Theocracy, not a religion.

The US Constitution does not protect a theocracy.

The 1st Amendment is very specific about protecting the rights of individuals from the government, as it concerns the practice of religions, not theocracies.

It clearly differentiates between government and religion. Again protecting the individual’s religious beliefs and practices from (the state) government.

In Islam religion and state are one.

We are a Nation governed by laws, the U.S. Constitution. We are not a Nation that is governed by religion, politicians or clerics.

How then can Islam be protected by the U.S. Constitution?

9) Islam allows Muslims to kill their own children, (honor killing) if the behavior of those children embarrasses or dishonors the family name. (which has already occurred on American soil)

Why would I allow people (whose religion allows them to murder their own children), be in the presence of other children?
My patrons often bring their kids to the range to teach them to shoot.

I am responsible for providing a safe environment for those children to learn gun safety and shooting sports.

10) In the 14 hundred year history of Islam, muslims have murdered over 270 million people.

In summary, people who shoot at my range come from all religious backgrounds… some are atheists… I do not care about their religious beliefs until or unless those beliefs command them to commit violent crimes against innocent people and I witness those crimes increasing, as we all have lately.

The thing is, according to The Federal Civil Rights Act, people have the right to “full and equal enjoyment of the goods, services, facilities, privileges, advantages, and accommodations of any place of public accommodation, without discrimination or segregation on the ground of race, color, religion, or national origin.” This protects us all – Christian, atheist, Hindu, Muslim, Jew – and blatantly disregarding it could have the unpleasant side effect of retaliatory discriminatory practices.

Here are a few questions to open the discussion:

Does Morgan’s refusal to consider Islam a religion mean that Islam is not a religion, protected under our Constitution?

Does a business owner have the right to choose with whom she will do business?

Will this stir up more animosity?

Would this make patrons MORE likely to be the victims of a jihadi attack?