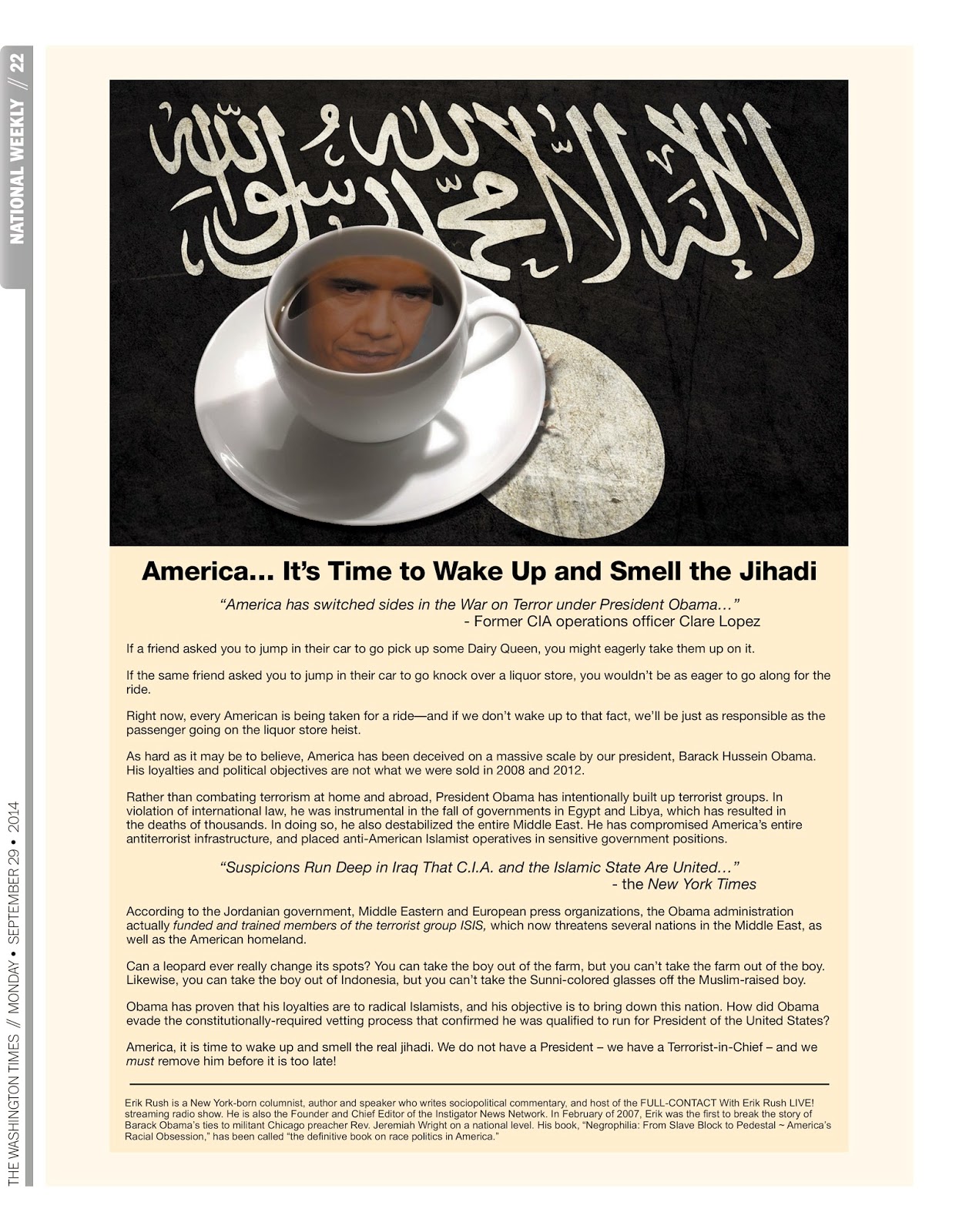 A scorching “advertorial” ran in yesterday’s Washington Times National Weekly (print edition). With an ex-CIA employee, Clare Lopez, calling Barack Obama a radical Islamic enemy of America and pointing out that he has switched sides in the war on terror, the gloves are finally coming off. There finally seems to be an awakening going on as to who Barack Hussein Obama actually represents. This advert is just the most recent punch to be thrown. Expect more.

The author of the current advertorial is well-known columnist Erik Rush. It is unclear who paid for the ad but one would surmise that it was either Rush or his associates. Here is a text transcript from Birther Report. An image of the advert appears below the text:

It’s Time To Wake Up And
Smell The Jihadi; Obama Evaded Vetting Process
take our poll - story continues below
Completing this poll grants you access to DC Clothesline updates free of charge. You may opt out at anytime. You also agree to this site's Privacy Policy and Terms of Use.

America… It’s Time to Wake Up and Smell the Jihadi

If a friend asked you to jump in their car to go pick up some Dairy Queen, you might eagerly take them up on it.

If the same friend asked you to jump in their car to go knock over a liquor store, you wouldn’t be as eager to go along for the ride.

Right now, every American is being taken for a ride—and if we don’t wake up to that fact, we’ll be just as responsible as the passenger going on the liquor store heist.

As hard as it may be to believe, America has been deceived on a massive scale by our president, Barack Hussein Obama.

His loyalties and political objectives are not what we were sold in 2008 and 2012.

Rather than combating terrorism at home and abroad, President Obama has intentionally built up terrorist groups. In violation of international law, he was instrumental in the fall of governments in Egypt and Libya, which has resulted in the deaths of thousands. In doing so, he also destabilized the entire Middle East. He has compromised America’s entire antiterrorist infrastructure, and placed anti-American Islamist operatives in sensitive government positions.

“Suspicions Run Deep in Iraq That C.I.A. and the Islamic State Are United…”  – the New York Times

According to the Jordanian government, Middle Eastern and European press organizations, the Obama administration actually funded and trained members of the terrorist group ISIS, which now threatens several nations in the Middle East, as well as the American homeland.

Obama has proven that his loyalties are to radical Islamists, and his objective is to bring down this nation. How did Obama evade the constitutionally-required vetting process that confirmed he was qualified to run for President of the United States?

America, it is time to wake up and smell the real jihadi. We do not have a President – we have a Terrorist-in-Chief – and we must remove him before it is too late!

Erik Rush is a New York-born columnist, author and speaker who writes sociopolitical commentary, and host of the FULL-CONTACT With Erik Rush LIVE! streaming radio show. He is also the Founder and Chief Editor of the Instigator News Network. In February of 2007, Erik was the first to break the story of Barack Obama’s ties to militant Chicago preacher Rev. Jeremiah Wright on a national level. His book, “Negrophilia: From Slave Block to Pedestal ~ America’s Racial Obsession,” has been called “the definitive book on race politics in America.”