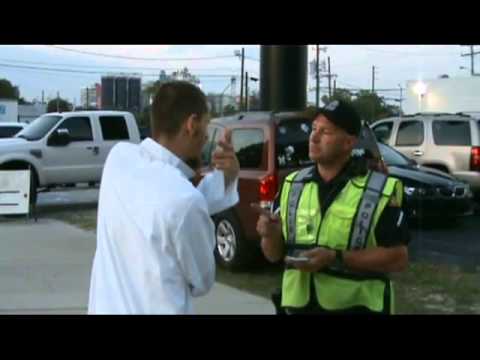 The following video is how Islamists press their hegemony on society, through violence. Yes, this is the true face of the “religion of peace.” In a video captured at a Lady Gaga concert in 2011, a team of street preachers were violently attacked by a Muslim.

While the Muslim attempted to shout them down, the preachers were unwilling to bend to the follower of Mohamed.

Unable to exercise self-control, the Islamists continued his bullying tactics, finally pushing up against one of the men holding a couple of signs. When the man would not back down, the Muslim head butted him in the face, breaking his cap and causing blood to pour from his mouth.

The preacher speaking through a bullhorn then wrapped the Muslim up in a headlock and it was about to be “WWF time,” until the Tampa police, who were watching the entire episode stopped directing traffic to deal with the issue.

The Muslim man was told to leave. However, the video later demonstrated that he did not do so and eventually was handcuffed and arrested.

However, the man who was attacked was then charged with battery by the police officer and given an option to either sign a citation to that effect or go to jail. The man signed the citation.

The officer would not view the video, claiming that he saw the entire thing. If that was true, then he should not have been citing the Christians at all.

Kudos to the men who stood their ground against this Islamic devil!

According to the video’s description:

This may be a bad thing but what is worse is the way the police handled the attack. They actually charge the Christian with battery. They would not view the video nor did they talk to any of the witnesses. Here is the video you be the judge and then call the Tampa police department and tell them to drop these trumped up charges and do their job properly. Case # 11-217735, ORI# 0290200 The (I hate to give him this title) police officers name and badge number are Kevin Krupa Badge # 565.
Here is their number (813) 242-3800
You can also call the Chief of Police 813-276-3799
Or the Mayor at 813-274-8251

More of this will come as demographics of Muslims grow (To see what’s coming if it is not stopped, take a look at the UK). And since there are no “moderate” Muslims, those who have remained silent will eventually join them. I’m with my friend Tom Wise on things like this: It’s time for a beatdown, and I’m not speaking metaphorically here.