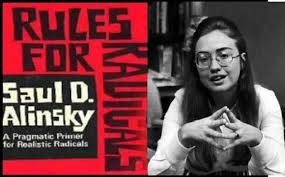 Hillary Clinton is a lady many despise and many love. But just what does anyone know about her background and how it relates to the United States? Her background has some really radical people in it, and one particular individual is none other than Saul Alinsky. Now, many have to wonder just who is this Saul Alinsky? Now we do have to give a brief background on him, since it is his ideology that Hillary Clinton grew up loving. The first thing we have to present is his famous book, “Rules For Radicals,” of which Hillary even wrote a letter to him asking when it would be out, as she so lightly stated in her letter to Saul Alinsky, dated July 8, 1971.

When is that new book coming out—or has it come out and I somehow missed the fulfillment of Revelation? I have just had my one-thousandth conversation about Reveille and need some new material to throw at people. You are being rediscovered again as the New Left-type politicos are finally beginning to think seriously about the hard work and mechanics of organizing. I seem to have survived law school, alightly bruised, with my belief and zest for organizing intact. If I never thanked you for the encouraging words of last spring in the midst of the Yale-Columbia madness, I do so now. The more I’ve seen places like Yale Law School and the people who haunt them, the more I am convinced I am that we have the serious business and joy of such work ahead, –if the commitment to a free and open society is ever going to mean more than eloquence and frustration.

I miss our biennial conversations. Do you ever make it out to California? I am living in Berkeley and working in Oakland for the summer and would love to see you. Let me know if there is any chance of our getting together—2667 Derby #2, Berkeley 415-841-5330.”

Let us inform you of just who this Saul Alinsky is that Hillary Clinton is trying to meet in California. We will make this brief, since including Saul Alinsky’s history and how it goes against the Constitution would take up many pages, which we will do in a book soon.

Saul Alinsky was born to Russian-Jewish parents in Chicago in 1909, Saul Alinsky was a Communist/Marxist fellow-traveler who helped establish the tactics of infiltration — coupled with a measure of confrontation — that have been central to revolutionary political movements in the United States in recent decades. He never joined the Communist Party, but instead, as David Horowitz puts it, became an avatar of the post-modern left.

Saul Alinsky has been identified as such:

As Alinsky put it: “A reformation means that the masses of our people have reached the point of disillusionment with past ways and values. They don’t know what will work but they do know that the prevailing system is self-defeating, frustrating, and hopeless. They won’t act for change but won’t strongly oppose those who do. The time is then ripe for revolution.”[1]

Now, with her letter, part of which is shown above from the site, it could be asked just what type of person Hillary Clinton is. It would seem to show that she is a closet Socialist/Communist at best, or maybe an individual who has the same type of “Rules For Radicals” in her head to toss out upon the people of the United States. Much could be stated about what Hillary Clinton may plan to do, should she win the 2016 Presidential election, but one thing is for sure: her idea of the United States is not the same as the honest, working Citizen’s! Her ideas are lined with dreams of an “Alinsky” style of not just government, but nation—one that has the Constitution trampled upon.

Allen West wrote the article cited above, and in it are the total copies of the letters both to and from Saul Alinsky in relation to Hilary Clinton. We should have extreme questions about this, no matter where one sits on the sides of politics, since her ideas seem to stem from the teachings of Saul Alinsky and his ideology was to destroy the United States and turn it into a “Socialist” state! Obama had the Communist Party of the United States support him, not just as President, but also when he ran for Illinois Senator! It would seem that, since Hillary Clinton comes from that same distinct area, maybe she, too, stands to obtain the support of the Communist Party!

We are not just dropping names here; these are facts, as shown in the opening paragraph of the article written by Allen West:

“I went to Chicago a couple of times over the summer — beautiful city, and what an awesome waterfront along Lake Michigan. However, I just have to laugh when I think of the level of radicalism and corruption in Chicago politics. Here is the lineup of famous Chicago residents: Saul Alinksy, Barack Hussein Obama, Hillary Rodham Clinton, Rahm Emanuel, David Axelrod, Valerie Jarrett, Jesse Jackson, Sr. and Jr. (the latter being a federal prison resident), Jeremiah Wright, Bill Ayres, Tony Rezko, Louis Farrakhan, David Plouffe, and, of course, Al Capone. Now, combine that with the number of incarcerated former politicians and the fact that in June of this year, the Communist Party of the United States held its 30th convention in Chicago.”

“As reported by the Washington Free Beacon, “Previously unpublished correspondence between Hillary Clinton and the late left-wing organizer Saul Alinsky reveals new details about her relationship with the controversial Chicago activist and shed light on her early ideological development. Clinton met with Alinsky several times in 1968 while writing a Wellesley college thesis about his theory of community organizing. Clinton’s relationship with Alinsky, and her support for his philosophy, continued for several years after she entered Yale law school in 1969, two letters obtained by the Washington Free Beacon show.

“The last thing America needs is another left wing ideologue espousing progressive socialist policies. The problem for Hillary Clinton is that she’s tried very hard to hide her radicalism – as a matter of fact, she’s doing everything possible right now to distance herself from ol’ brother Barack. However, she’s not trusted by the progressive Left or the rest of America either. We all know Hillary Clinton as a shrewd deceptive operator, not personable and willing to tell a lie at the drop of a hat. Plus, the Clintons have more scandals following them than the days are long — hmm, sounds like a familiar tune of the past six years. After all, they were all spawned from the same corrupt social organizing political machine. They’re just serious rivals.

“A self-proclaimed radical, Alinsky advocated guerilla tactics and civil disobedience (SEIU, Occupy Wall Street, ACORN) to correct what he saw as an institutionalized power gap in poor communities. His philosophy divided the world into “haves”—middle class and wealthy people —and “have nots”—the poor. He took an ends-justify-the-means approach to power and wealth redistribution, and developed the theoretical basis of “community organizing.” “The Prince was written by Machiavelli for the Haves on how to hold power,” wrote Alinsky in his 1971 book. “Rules for Radicals is written for the Have-Nots on how to take it away.”

Now, with all this just waiting to be dispensed out to the good people of the United States, we decided to bring these facts to light, and if people wish to read the letters and see for themselves what Hillary Clinton wrote, they can go to the site and read it. We feel that the more people that know about Hillary Clinton’s links to Socialists, Communists, thugs, criminals, and the like, the better it will be.

We do know that maybe the people are just now waking up to see that our very freedom and the Constitution we love is in threat, so maybe they will see Hillary for who she really is and that this lady should never hold another office of public statue anywhere.