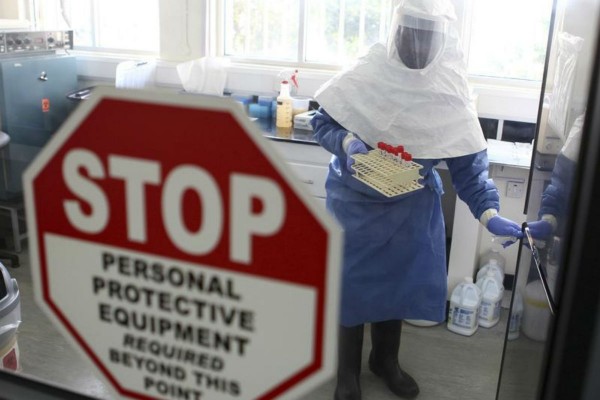 By now, none of us should be surprised that “health officials” and their associated agencies really DON’T know much about Ebola or how it is transmitted.

But this information is a bit shocking, even considering that it involves one of those government agencies.

Even just a month ago, we were told that Ebola isn’t easy to catch. Here’s what the CDC website said back on September 9, 2014:

When an infection does occur in humans, the virus can be spread in several ways to others. The virus is spread through direct contact (through broken skin or mucous membranes) with

Healthcare workers and the family and friends in close contact with Ebola patients are at the highest risk of getting sick because they may come in contact with infected blood or body fluids.

On September 11, 2014, here’s what the CDC’s Questions and Answers on Ebola page said about transmission of the virus:

How is Ebola spread?

The virus is spread through direct contact (through broken skin or mucous membranes) with blood and body fluids (urine, feces, saliva, vomit, and semen) of a person who is sick with Ebola, or with objects (like needles) that have been contaminated with the virus. Ebola is not spread through the air or by water or, in general, by food; however, in Africa, Ebola may be spread as a result of handling bushmeat (wild animals hunted for food) and contact with infected bats.

Here’s what the CDC’s Q&As on Transmission page says now (the page was updated on September 22, 2014):

Can Ebola spread by coughing? By sneezing?

Unlike respiratory illnesses like measles or chickenpox, which can be transmitted by virus particles that remain suspended in the air after an infected person coughs or sneezes, Ebola is transmitted by direct contact with body fluids of a person who has symptoms of Ebola disease. Although coughing and sneezing are not common symptoms of Ebola, if a symptomatic patient with Ebola coughs or sneezes on someone, and saliva or mucus come into contact with that person’s eyes, nose or mouth, these fluids may transmit the disease.

How long does Ebola live outside the body?

Ebola is killed with hospital-grade disinfectants (such as household bleach). Ebola on dried on surfaces such as doorknobs and countertops can survive for several hours; however, virus in body fluids (such as blood) can survive up to several days at room temperature.

If a symptomatic patient with Ebola coughs or sneezes on someone, and saliva or mucus come into contact with that person’s eyes, nose or mouth, these fluids may transmit the disease.

Ebola on dried on surfaces such as doorknobs and countertops can survive for several hours; however, virus in body fluids (such as blood) can survive up to several days at room temperature.

This isn’t the first time the CDC has changed content on a webpage, and the act in itself isn’t a bad thing – after all, when new information is discovered, one would expect a site like this to be updated.

But sometimes, the addition of the new information is…suspicious. A recent example that comes to mind happened about a month ago, when the CDC removed the phrase “contaminated air” from an article about Ebola infection prevention.

The thing is, this information hasn’t been publicized. In fact, CDC director Dr. Thomas Frieden contradicted himself in an interview when asked about how Ebola is transmitted, as Truthsteam Media reported yesterday:

Dr. Thomas Frieden, CDC director [standing right next to CNN’s Sanjay Gupta]: Well actually, Sanjay and I, if one of us had Ebola, the other would not be a contact right now. Because we’re not in contact. Just talking to someone is not a way to get infected. It’s not like the flu, not like the common cold. It requires direct physical contact.

CNN host Michaela Pereira: But if he sneezes on you, it’s a different story.

Sanjay Gupta: I think there’s a utility here because we’re having this conversation but I am within 3 feet of you. Wouldn’t I be considered a higher risk? My understanding reading your guidelines, sir, is that within 3 feet or direct contact — if I were to shake your hand, for example — would both qualify as being contact.

Frieden: We look at each situation individually and we assess it based on how sick the individual is and what the nature of the contact is. And certainly if you’re within 3 feet, that’s a situation we’d want to be concerned about. But in this case, where we haven’t hugged — we haven’t shaken hands — we have not had any contact that would allow either of our body fluids to be in contact with the other person.

Gupta: So, to Michaela’s point, the reason we talk about coughing and sneezing not being a concern — if you were to have coughed on me — you’re saying that would not be of concern?

Frieden: We would look at that situation very closely…

During that interview, Dr. Frieden had the opportunity to make these new, er, findings, public knowledge…but he didn’t.

Infectious disease experts are saying it IS possible for Ebola to mutate and become airborne.

Dr. Gil Mobley, a microbiologist and emergency trauma physician, said the CDC is either “lying or is grossly incompetent” and is “sugar-coating” the risk of Ebola spreading in the US.

Are “health officials” purposefully LYING to us, or are they truly incompetent, as Dr. Mobley suggests?

Why don’t they just admit they don’t know, if that’s the case?

As Jim Schutze points out in his intriguing article Even the CDC Isn’t Totally Sold on its Own Proclamations on How Ebola Is Transmitted, the CDC’s own bulletins and website suggest that the agency, well..really just doesn’t know how the virus is transmitted.

Schutze says, “The CDC and some media are more interested in crowd control than in digging for the full story.”

That sure seems to be the case.

Maybe Ebola can go airborne. Maybe it can’t. Maybe it already has.

Maybe it can be transmitted via fomites (surfaces capable of carrying the living virus). Maybe it can’t. Maybe we can contract it by touching a doorknob. Maybe we can’t.

Or, just maybe, “health officials” don’t know very much about how Ebola is transmitted at all.

Either way, clearly we are on our own, and the best thing to do is take care of ourselves, hope for the best, and prepare for the worst.

The Vaccine Interview You Really Should Hear To Educate Yourself With Dr. Sherri Tenpenny (Video)
February 25th, 2021 DC Clothesline