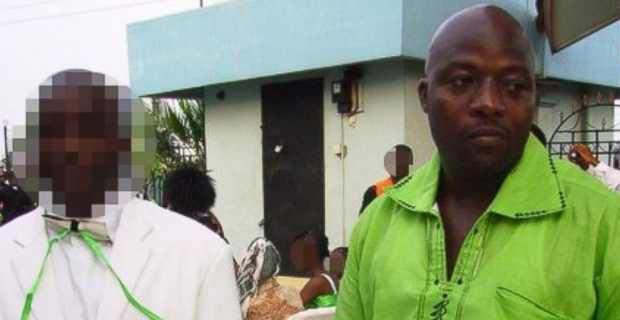 Thomas Duncan, the Liberian man diagnosed in Texas with Ebola, is under strict quarantine and may face criminal charges for lying on his health screening forms before leaving Liberia.

Liberian authorities say Thomas Eric Duncan wasn’t truthful on his health questionnaire at the airport, after being asked if he had been in contact with anyone suffering from the deadly disease.

According to the Associated Press, Duncan wrote “no” when asked that question, but neighbors say Duncan helped a woman who died of the disease while he was in his home country. At the time, her symptoms were thought to be related to her pregnancy.

Liberian airport officials say Duncan will be prosecuted after he returns home.

The Liberia News Agency said that Duncan boarded an SN Brussels Airlines flight. That plane took him first to the Belgian capital, and he then flew to the United States, where he arrived September 20.

He was on two United Airlines flights — Flight 951 from Brussels to Washington Dulles and Flight 822 from Washington Dulles to Dallas-Fort Worth — during that trip, according to a spokesperson for the airline who did not want to be named. (source)

His family is under strict quarantine and observation for 21 days. They will face criminal charges if they leave their apartment or visit with anyone outside:

Dallas County Judge Clay Jenkins said Thursday that Duncan’s family in Dallas left their home against official requests, and that’s why a “control order” was put in place Wednesday night to keep them inside.

The family must also be available to give blood samples and be monitored until the incubation period for Ebola has passed on Oct. 19. CDC Director Dr. Thomas Frieden said their temperatures will be taken twice a day.

Law enforcement is stationed at the apartment complex where the family lives to make sure they stay put. Officials say house conditions need to improve, and Judge Jenkins says the family’s bedding and belongings have been bagged. (source)

More than a week after a Liberian man fell ill with Ebola and four days after he was placed in isolation at a hospital in Dallas, the apartment where he was staying with four other people had not been cleaned and the sheets and dirty towels he used while sick remained in the home, health officials acknowledged on Thursday afternoon.

That’s right – the apartment Duncan’s family is being forced to stay in has not been cleaned or decontaminated:

The Texas health commissioner, Dr. David Lakey, told reporters during an afternoon news conference that health workers should have moved more swiftly to clean the apartment but that they had had trouble finding an outside medical team to do the work. They encountered “a little bit of hesitancy,” he said.

“We are arranging for that apartment to be cleaned,” he said. “The house conditions need to be improved.”

During a CDC teleconference today, Dr. Frieden said that people traveling from West Africa may not know they have been exposed to Ebola, or choose to not disclose that information.

He also said health officials are mostly concerned with people who have had prolonged exposure within three feet of a patient.

Duncan is in stable but serious condition at Texas Health Presbyterian Hospital.

Editor’s Note: Lily’s article was first published last night at The Daily Sheeple. I wanted to add a note because it has come to my attention today that this quarantine enforcement is armed. Some probably assumed that already but there may be a few people like myself had an entirely different visual. Today Steve Watson reported:

The family of Thomas Duncan, the man Dallas man diagnosed with Ebola, are now under armed guard, quarantined in their home, following an attempt to breach the restrictions and leave the apartment building, reports the AP.

“We didn’t have the confidence we would have been able to monitor them the way that we needed to,” Texas State Health Commissioner David Lakey said when asked about the controversial control order.

Those under armed guard include a woman identified as Louise Troh, thought to be in a relationship with Duncan, a 13-year-old boy, said to be the woman’s son, and two nephews in their 20s.

You might remember that we reported some time back that even healthy people would be forced into quarantine situations. This may be the reality for thousands of Americans before all is said and done. Remember that Duncan had contact with many people before entering the hospital. I have seen new reports floating around that he may have had close contact with as many as 100 people.