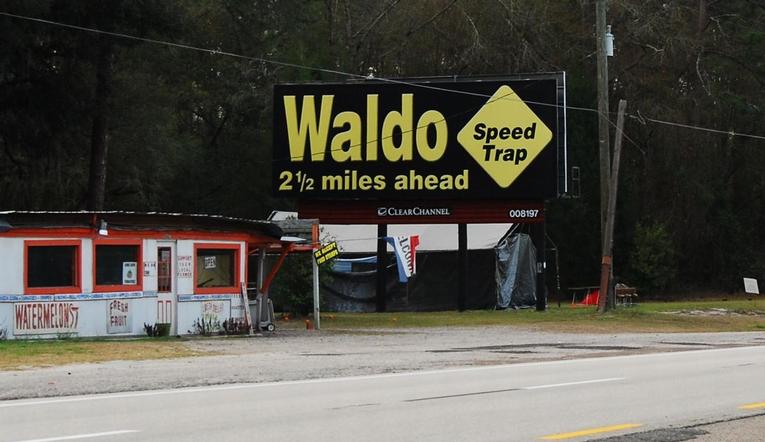 WALDO, FL- The city council of Waldo, Florida voted 4-1 this week to disband its corrupt police department. While police in Waldo have been recognized for mistreatment of civilians, the department came under fire over illegal ticket quotas, deceptive court appearances, and unethical storage techniques. Waldo, a town of 1,000 residents and one stop light, was home to one of the most notorious speed traps in the country until aggravated cops reported their superiors.

The city’s seven police officers wrote nearly 12,000 speeding tickets in 2013, earning $400,000 and making up a third of the town’s revenue. These actions were in violation of state law as the police chief ordered officers to write 12 tickets per 12 hour shift or face repercussions.

“They’re just waiting to catch people because they have to write so many tickets in order to meet the budget, and that’s wrong.”

In August, five Waldo officers rebelled against their superiors and made a presentation to the city council about the malpractices. Followed by their testimony,  then-chief Mike Szabo was suspended (with pay) pending a Florida Department of Law Enforcement investigation. Corporal Kenneth Smith was later suspended by Waldo City Manager Kim Worley when a second investigation was launched.

Before the conclusions of these reports, both suspended officers resigned. In early September, Worley arranged a temporary contract with the Alachua County sheriff to employ a lieutenant, but when that month-long deal expired, Worley was left with few choices.

An audit of the department found it needed to upgrade its computer systems and storage facilities to be up to standards for criminal investigation, which the city was too underfunded to do. After State Attorney Bill Cervone advised that he would bring a case before the Alachua Grand Jury that would be “humiliating,” the city council voted to disband the notoriously corrupt police department.

City Councilwoman Carolyn Wade, who voted reluctantly to shut down the force, said:

“Too much has gone too far and I don’t think we can recover.”

It remains to be seen what will happen in Waldo, but for now, the Alachua County Sheriff’s office will provide law enforcement services.

The Florida Department of Law Enforcement and State Attorney Cervone are still investigating and pursuing the criminal cops who extorted drivers in Waldo.

Though some residents are upset with the decision, Brandon Roberts, leader of the cops who spoke out, expressed no remorseeven considering he had lost his job. He said:

“It’s what was right. A lot of people complain about cops not stepping across the blue line, and this is a prime example, because you have to worry about this kind of stuff.”

“If I took down two bad ones, it was worth it.”