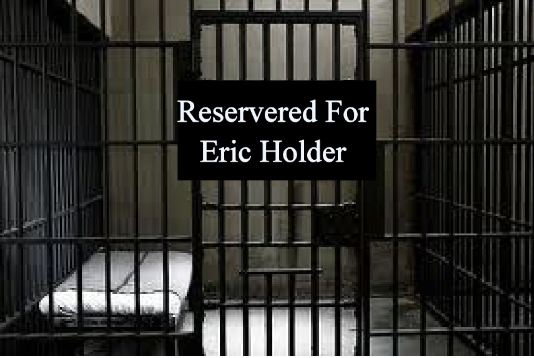 Attorney General Eric Holder has been found in Contempt of Congress already. However, on Thursday, the House Oversight and Government Reform Committee asked US District Court Judge Amy Berman Jackson to hold Holder in contempt of court and fine him personally if he does not comply with her order to turn over documents related to Operation Fast and Furious. But that’s not all.

House lawyers even suggest it may be necessary to throw the attorney general in jail to get him to abide by the court order.

“Should the Court determine that the Attorney General has violated that Order, the Court should impose on the Attorney General an appropriate penalty to coerce his compliance with the August 20 Order, including an escalating daily monetary fine against Eric H. Holder, Jr., to be paid by Mr. Holder out of his personal assets, converting to incarceration if the payment of daily monetary fines does not produce compliance within a reasonable period of time,” House Counsel Kerry Kircher and other lawyers wrote in the new motion (posted here).

House lawyers said they want any documents they’re entitled to now, rather than waiting. The House committee did indicate earlier that it would not object to extending the deadline until Nov. 3.

Let’s just remind ourselves that this Fast and Furious document fiasco has been going on for years. We have a criminal administration that has asserted executive privilege, something one doesn’t find in the Constitution and something for which Barack Obama blasted George W. Bush. The DOJ and the Executive Office are working together to cover up their criminal activities not only on Fast and Furious, but also on the IRS scandal. They won’t disclose the truth because they have something to hide.

DOJ spokesman Brian Fallon said that what the House was engaged in was a “stunt” and that the Justice Department will respond in due course.

“Attorney General Holder and his department have now failed to comply with a binding federal court order,” Issa said. “The attorney general and his department are acting as if the judge in the case has an obligation to modify her rulings with which they disagree, rather than they having the obligation to comply with those rulings. That is the arrogance that landed this case in court in the first place.”

Issa also said that the DOJ’s statements about extensions were fabricated.

“Contrary to the counterfactual claims of the Justice Department, the House did not agree to any deadline extension absent a ruling from the judge and in fact has asked the judge to enforce her order,” said Issa. “The American people can only continue to guess at what the attorney general and his department are hiding.”

Holder was held in contempt of Congress in June of 2012 and this lawsuit was filed in August of the same year. That’s how long this has been going on, and yet nothing has been done to the man. He wasn’t impeached, though articles of impeachment were introduced last year. This same House even thought about arresting former IRS head Lois Lerner, but we never saw any fruition of that, or an attempt to deal with Holder in a similar manner.

Upon his resignation last week, columnist Bradlee Dean rightly asserted, “It is time to bind criminals such as Eric Holder down with the chains of the Constitution and throw him in jail where he belongs. America is a government of the People, by the People, and for the People. Therefore, it is our responsibility to hold our public servants to their oaths of office under the Constitution of the United States and the laws of our republic.”

“If we fail to do so, our government will become ‘a source of terror to all its citizens‘ and create ‘a country where everyone lives in fear,'” Dean concluded.

The only thing I would disagree with is jailing Holder. This man over saw the illegal transfer of weapons to drug cartels who are not only enemies of their own country, but also enemies of America. In my mind, that is treason. There is absolutely no way that he didn’t know what was going on. His signature was on the forms authorizing the operation. The same thing applies to Barack Obama, and personally I think it should follow that they be tried, convicted and sentenced to death as a proper judgment against them.

However, I also have to question why Congress has not done more to press this issue. By allowing it to go on for so long, it seems that they are just as culpable in all of this.