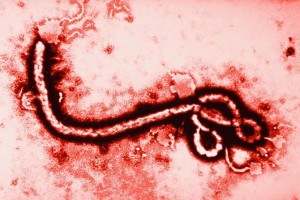 A United Airlines flight from Brussels was met by Centers for Disease Control and Prevention officials at Newark Liberty International Airport in New Jersey after a passenger on board believed to be from Liberia exhibited possible signs of Ebola.

The passenger, who was vomiting on the plane, was traveling with his daughter. Both were escorted off the plane by by CDC members in Hazmat gear.

After landing in Newark at around 12:15 p.m., authorities sealed the plane at Gate 54 and asked the 255 passengers and the plane’s crew to remain on board, the Port Authority said.

At around 1:50 p.m., passengers were allowed off the plane and the sick passenger and his daughter were taken to an area hospital, the Port Authority told 1010 WINS.

The sick man was wearing a surgical mask when he was removed from the plane, Raymond Schraff, a passenger on board the flight, told CBS News. He said the man’s daughter was not.

Schraff said workers from the CDC wore full body protection when they escorted the man off the plane.

Schraff also said an announcement was made that the man wasn’t contagious.

How do they know?

There is no word yet on if any other passengers were quarantined or detained at Newark airport.

The CDC has yet to say what the next steps will be and whether or not they’ve ruled out Ebola, 1010 WINS reported. (source)

According to an official briefed on the situation, preliminary information was that the passenger was vomiting on flight but did not display most of the other symptoms.

“He’s now being treated with protocols as if he has it, but no clear indication at this point that he does,” the official said.

After they were off the plane and it was determined he was not contagious, the rest of the passengers were allowed off, a source with knowledge of the situation told ABC News.

Let’s get this straight:

The man is believed to be from Liberia.

He was vomiting on the plane.

He and his daughter were escorted off the plane by CDC members in Hazmat suits, but the other passengers had to remain on the plane for another hour and thirty-five minutes.

The man isn’t contagious, but they have not diagnosed him with anything.

Does any of this make sense?