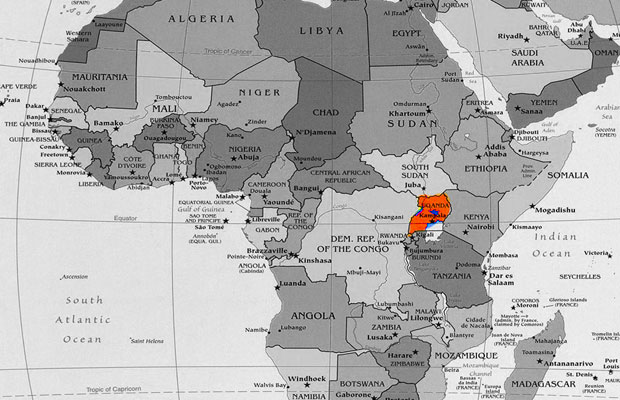 West Africa continues to be ravaged daily by Ebola, most specifically in Guinea, Sierra Leone and Liberia, but now on the other side of the continent it is being reported that the related deadly Marburg virus disease (MVD), formerly known as Marburg hemorrhagic fever, has now broken out in Uganda.

The deadly Marburg hemorrhagic fever has broken out in Uganda after samples taken to the Uganda Virus Institute tested positive, a top government official said Sunday.

Elioda Tumwesigye, minister of state for health told reporters that one person has so far died and 80 others are being monitored in central Uganda and the western district of Kasese.

“The Ministry of Health would like to inform the country of an outbreak Marburg which has so far killed one person. Another person who has developed signs is being monitored,” he said.

He said the index case died on Sept. 28 after developing signs of Marburg which was later confirmed by laboratory tests. The minister said the deceased’s brother has also developed signs and is currently under isolation.

He added that all the people that had contact with them are being monitored.

The Marburg virus was last reported in Uganda in 2012.

Marburg virus is related to Ebola virus in that both are filoviruses that cause hemorrhagic fevers — a severe illness that causes hemorrhaging which leads to organ failure and often death.

Although health agencies today discuss Marburg as if it’s a purely African disease, it’s name is actually derived from the city in Hesse, Germany where the virus was first detected in lab workers in 1967 (although cases were also identified at that same time in Frankfurt, and a few weeks later in Belgrade).

Also in common with Ebola, it has been widely posited that Marburg was not a naturally occurring virus but instead was created in those very laboratories. It has been reported that the German labs in question where Marburg first broke out were all producing vaccines using African green monkeys at the time. Experts agree that the natural reservoirs of both of these viruses are not known to this day, but both can kill at up to an 80-90% rate.

More as this story develops.