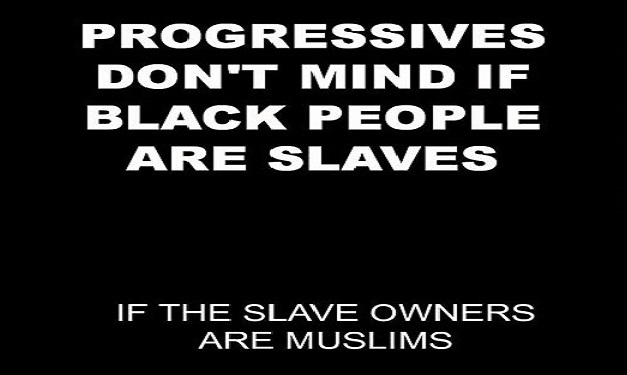 In my last article, White Privilege, White Slave, I highlighted the truth about slavery in America and the fact that white Europeans, not blacks from Africa, were the first slaves on the shore of the new world. This is not to say that the African continent had not be raided for slaves through the centuries, it’s just that white Europeans were not the ones doing it. The truth is that Muslims had conquered the African shores as early as the seventh century. This same author, who calls himself “Wrath,” from the “Godless and Black” blog, also writes that the religion of Islam was spread through Africa because African chieftains were bribed into accepting it in order to gain political favor from the Muslims raiding their countries. Muslims had been taking African slaves for nearly eight centuries before the transatlantic slave trade, and this continued for nearly one hundred years after America had abolished the practice. Finally, while we see the left accuse America of being a racist country because of our past with slavery, they idolize Islam, even though African slavery was legal in Saudi Arabia until 1962.

The hypocrisy of the left is truly astounding. In order to accomplish their agenda, they ignore the real atrocities occurring in the world in order to propagate the illusion that America is responsible for all evil. Blacks are still held as slaves and considered property in many Islamic countries today, and yet, Islam has a special place in the hearts and minds of the left as they portray them as oppressed victims. This is truly unbelievable.

This proves that there is a great deal of validity in Janna B’s latest article, as she highlights David Quammen’s attitude that we are responsible for African Ebola victims because of white privilege. Hopefully, the information I provided in this, as well as my last article, proves how idiotic the left can really be. Anyhow, I digress because I have to move on to my main point.

There seems to be an effort on the part of Muslim terrorists in America to recruit blacks into their religion. As I demonstrated at the beginning of the article, Islam has a long history of oppressing blacks and conquering African lands. As a result, many have come to believe that Islam is the original religion of blacks, and as such, Muslims are using this false information to recruit them.

While “Wrath” at the “Godless and Black” blog may be an atheist, the purpose of his article was to dispel the myth that Islam is the original religion of African blacks. In fact, he goes onto suggest that if the Arabs had never visited the African Shores there would be no black Muslims today.

Whether or not this is true, I don’t know. However, one thing is certain: blacks in America, many of whom were once Christians, are converting to Islam. Given the state of racial relations in America, and the insistence of the left to constantly accuse this nation of being racist, this is alarming. After all, there was virtually no noise concerning the fact that a black Muslim convert beheaded a white woman in Oklahoma. It’s funny because this one link is the only one I can find that identifies the victim as being white.

I have been convinced for a long time that the teaching of white privilege would lead to the exact type of racial violence we are witnessing in America today. What should be alarming people is the illusion of white privilege and the lies of whites intentionally keeping blacks down. These are the very reasons blacks are converting to Islam, and these are the reasons there is such a rise in black mob violence.

Richard Reddie, of The Guardian writes the following-

One of the first issues I became aware of was the fact that many converts feel uncomfortable with the term “black Muslim”, as they regard themselves as part of a worldwide community of believers who do not recognize “race”. However, others are less reticent about associating their blackness with being a Muslim, and believe that Islam is the “natural religion of black people” and provides the means for full “spiritual, mental and physical liberation” from an oppressive system designed to subjugate them.

My research reveals that there is no one, straightforward reason for conversions, but a plethora of theological, emotional and cultural motivations. Practically all those interviewed suggested that Islam had given their lives meaning and woken them from a spiritual malaise. Others said that their faith provided inspiration and strength to engage with a society they regarded as corrupted by materialism and moral relativism. And for those whose lives had previously been errant, Islam’s decisiveness on a range of religious and socio-cultural matters had given them a focus and an anchor.

This is truly frightening in the sense that not only are blacks being taught by their own countrymen that they are oppressed by white men, they are now turning to Islam, a brutal, murderous ideology, as a means of seeking inner peace and justice.

You see, in the absence of truth and in the absence of God, evil has a chance to advance forward. For decades, since the creation of the “Great Society” by Lyndon Johnson, blacks have been oppressed by white men; namely, white democrats who believe that the black man is not as good as the white man. They created a system where the black man lost control of his family, his initiative was destroyed, and dependence upon government became the only way to survive. In any given city across America this is proven by looking at which political party has governed the impoverished black neighborhoods. But who will listen? Blacks have been conditioned to believe that Democrats care about them and Republicans are the racists. Well, blacks have been voting democrat for years, and now they feel the need to convert to Islam because Democrat policies have been so successful?

America, if you can’t see that there is a deeper, darker agenda here, then you are blind.