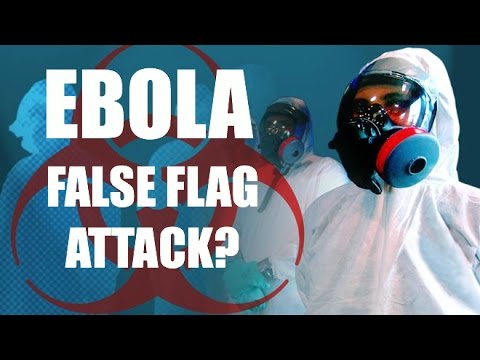 The Washington Post reported that a major Liberian newspaper, the Daily Observer, has published an article by a Liberian-born faculty member of a U.S. university who is strongly implying the epidemic is the result of bioterrorism experiments conducted by the United States Department of Defense, The professor, from Delaware State University, Cyril Broderick, is the professor making these claims. This and other similar claims begs the question, “Is Ebola a manufactured crisis that is being allowed to purposefully spread to countries in the West, including the United States?

The Odds of Ebola Spreading to the West

A series of highly sophisticated scientific and statistical analyses are strongly suggestive of the fact that the best chance that the West has to contain the spread of Ebola is to shut down their borders and to ban all direct and indirect flights from West Africa into Western nations.

A PLOS analysis of disease spread patterns and airline traffic data suggests that the virus has a 50% chance of reaching Great Britain by October 24. Experts have also predicted there is a 75% chance the virus could reach France by October 24. Belgium has a 40% chance of seeing the disease imported, while Spain and Switzerland have lower risks of 14% each. That is not much comfort for Spain because the Washington Post is reporting the following: “In the first known case of Ebola transmission outside of Africa, a nurse in Spain has contracted the deadly virus after caring for a sick priest who had been flown back from West Africa for treatment, Spanish health minister Ana Mato said at a news conference Monday“. The Spanish case points to the fact that one can establish odds but, when it comes to Ebola, it only takes one infected person getting through to pose a major health crisis.

Meanwhile, in Spain, the potential carnage does not stop with one nurse. Spanish health authorities have now confirmed that three more medical personnel at the same hospital are being isolated because of Ebola symptoms.

The multiple PLOS analyses also stated that if authorities were to take steps to reduce air travel from West Africa to Britain and France by 80%, France’s risk would be lowered to 25%, while Britain’s risk would be reduced to 15%.  The most effective Ebola countermeasure is to stop Ebola from reaching the United States is to ban flights from the infected areas.

Yet, and inexplicably, The World Health Organization (WHO) has not placed any restrictions on travel and the WHO has actually gone so far as to encourage the various airlines to keep flying to the countries with the biggest Ebola outbreaks. However, this makes a great deal of sense since the WHO blocked Ebola treatments from reaching West Africa.

Even Fox News, in a recent editorial, is enraged by the fact  that Obama has failed to initiate a travel ban on West African flights.

In light of this information, any reasonable person should be compelled to ask these questions, ” Why won’t President Obama take the most basic steps to protect Americans from Ebola by stopping direct and indirect flights from West Africa? And why won’t he also mitigate the bioterrorism threat which could come from our wide open southern border”?

Mike Adams the owner of Natural News has pointed out on The Common Sense Show (October 5, 2014) “Thomas Eric Duncan walked freely through our airports and entered the general population without ever being asked by U.S. security personnel about where he was from or if he had any health conditions”.

Not only is Obama negligent, he is not following federal guidelines and procedures according to several sources. This has led some federal employees to assert that Ebola is a manufactured crisis. According to one insider source that I spoke with yesterday, if the proper procedures were being enforced, we would see the following response from government in response the Ebola case in Dallas:

Did anything close to the these procedures happen in Dallas? It is very difficult to conclude that Ebola is not a false-flag type of manufactured crisis. This belief is bolstered by the following revelation by a CIA insider.

Instead of the employment of known and effective containment procedures and moving to mitigate the bioterrorism threat coming through our southern border, the Obama administration, instead, gives us this meaningless rhetoric from federal health officials. The professionalism of these empty reassurances sounded more like a pep rally than a medical news conference designed to outline clear and concise medical plan of action.

I have come to an undeniable conclusion, that in the fact of this coming pandemic, I cannot trust my government to make wise and prudent decisions on my behalf.  I am on my own when it comes to the present crisis. I can trust nothing that this government says. We are all on our own.