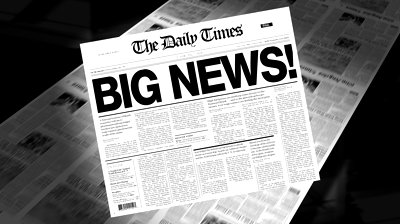 Usually, when the mainstream media mentions preppers and survivalists, the angle is not flattering.  Maybe someone who considers himself a survivalist has committed a heinous crime and is on the loose.  Perhaps a prepared family is beaming from the page while sitting in their bunker, hundreds of food buckets in the background and 17 paragraphs of mockery in the article below the photo.

Perhaps, preppers aren’t so crazy after all.

First, MSNBC got the ball rolling the day after Thomas Duncan was diagnosed with Ebola. In the article, “What Preppers Are Doing About Ebola“,  MSNBC reporter Chris Morris quoted two preparedness experts that reinforced the need to remain calm, but aware.  Published on October 1, the day after the diagnosis, the unbiased and rational article noted that some in the survival/prepping world expected to see a bump in sales.

Early figures from Amazon bear this out; as of Wednesday sales of a type of full-body protective suits were up 131,000 percent and sales for one type of mask had risen 18,000 percent in 24 hours.

This article was quickly followed up by NY Mag, who put out a snarky piece lazily using the same quotes as MSNBC’s article, but twisting them to make the community sound like fringe-dwelling lunatics.

Two days later, the market is still hot. Although the online retailer does not release exact sales figures, the “industrial and scientific” section of the“movers and shakers” page, which shows products flying off the virtual shelves in the last day, is filled with gas masks, body suits, and, for some reason, a “Combat Application Tourniquet” (zombie invasion?). As seen above, a huge chunk of the top 20 sellers would have practical uses if more than one person in the country had Ebola.

But in the survivalist community, also known as preppers — the people who think the world could any minute, for reasons ranging from Obama being a reptilian Illuminati puppet to Obama releasing an airborne version of the virus — anyone just shopping now is a total noob.

Despite the derision, one thing is clear: People are stocking up. 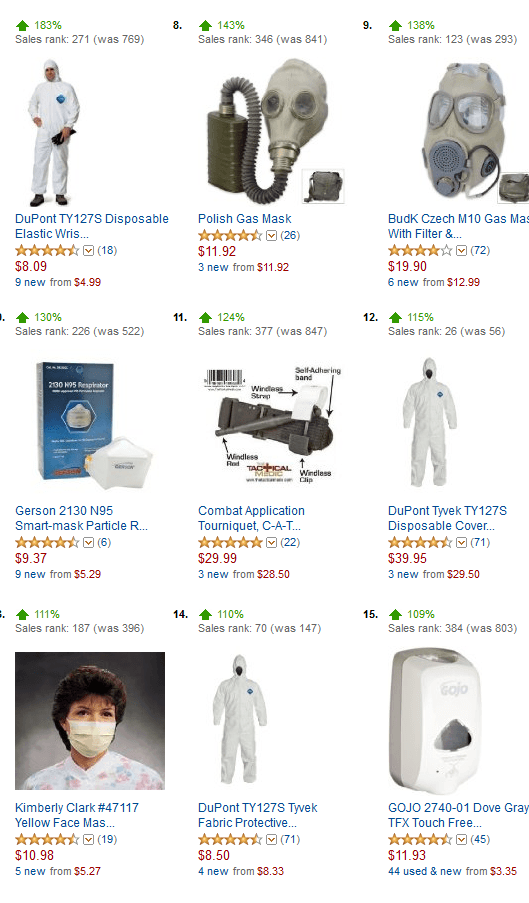 From the left, row by row, the top products for a potential pandemic on October 3rd were:

The same day, an article appeared on Bloomberg stating in no uncertain terms that the emergency supply business was booming.  The fair and reasonable coverage on Bloomberg just provided facts. First of all, DuPont has tripled production to meet the need for protective items:

DuPont, which is based in Wilmington, Delaware, said in an e-mailed statement that it has tripled production of some items used for Ebola protection and has “worked hard to shift products geographically and made a available a broader range of styles suitable for various treatment levels.”

A message on DuPont’s website, which cites the Centers for Disease Control and Prevention, recommends gloves, eye protection, face masks and fluid-resistant gowns to protect against Ebola infection.

Bloomberg said that it was not only the sale of protective clothing that was up, but also that handbook sales were dramatically on the rise:

Materials teaching how to deal with a potential Ebola outbreak also have gained in popularity. Sales of “Ebola Survival Handbook: A Collection of Tips, Strategies, and Supply Lists From Some of the World’s Best Preparedness Professionals

” which was published Sept. 22, rose 49 percent in the past 24 hours. Buyers of the book frequently also purchase Tyvek suits and respirators, according to Amazon, which encourages customers to buy all three together.

The Washington Post got on the survivalist bandwagon today, with an article entitled “How ‘survivalists’ in America are planning their escape from Ebola apocalypse — right now.” This article focused less on the purchases and more on the lifestyle.

Don’t have one? There are some who do. They sometimes call themselves “Preppers” — the word those devoted to preparing for environmental and/or financial Armageddon usually prefer to “survivalist” — have some advice for you.

The article then broke down the 4 “rules” for surviving an Ebola pandemic. (This is despite the fact that all of the preppers interviewed concurred that it was merely time to be watchful and aware, not time to go into full-out bunker mode.)

Rule No. 2: Getting ready means getting armed.

Rule No. 4: Withdraw from society — but keep busy.

Will society see the wisdom in getting prepared?

Judging from the comments on the articles, there are some people still think preppers are crazy.  Little gems like this:

Ah yes. You need to have guns for the marauding looting bands of… well maybe sort of prepperd  (sic) preppers… who will be roaming the countryside killing and raping and so forth..

The sad part is there are people who believe the above and waste large amounts of resources trying to make this dream come true. Says a lot about the person being interviewed I guess,

And the wisdom of this pleasant fellow:

These preppers are great, as they’ll buy anything as long as you label it “survival”. Now it’s off to Ebay to sell more “survival fire sticks with survival lighting strip included” aka matches to the gullible.

And of course this brilliant humanitarian:

It’s also the fool who spends a great percentage of their time & resources preparing for a very low probability event (apocalyptic happening that leaves your family alive).

But lets face it, most of these people are praying such an event occurs, for multiple reasons. Not the least of which because they can’t wait for the opportunity to kill people on the flimsiest justifications, and without recourse.

Besides, I’d far rather myself and my family be dead, than share an Earth with the type of people who ‘prep’.

I wonder who will be the first person to knock on a prepper’s door for help should disaster truly strike? It wouldn’t be farfetched to guess that it might be an arrogant, self-professed intellectually superior liberal who feels entitled to that prepper’s stockpile.

Comments aside, judging from sales numbers on Amazon, many people who had never before considered owning N95 masks and protective clothing are quietly stocking up.

You can learn more about preparedness from these regular Daily Sheeple contributors: