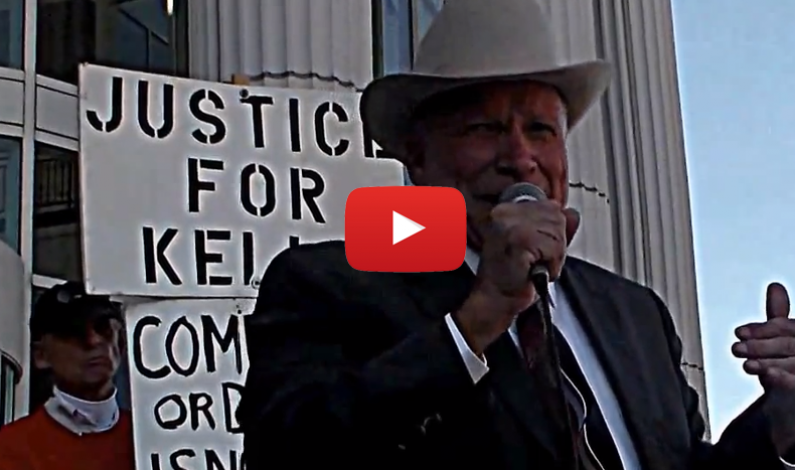 “SWAT teams have been infiltrated by bullies with badges and guns who foster a mentality that killing criminals reduces recidivism.”

Davis County, UT — William “Dub” Lawrence is a former city police officer, former U.S. Marine, and former Sheriff of Davis County who has awaken to the reality of Police State USA. Sadly this awakening was sparked by the murder of his son-in-law by a SWAT team that he created.

In September 2008, he watched helplessly as the same SWAT team he helped create over 30 years earlier shot and killed Brian Wood, his 36-year-old son-in-law.

Since this horrible atrocity, Lawrence has become a leader of the growing police reform movement.

Over the last couple of years Lawrence along with Brad Barber and Scott Christopherson, have created a documentary titled Peace Officer. According to Christopherson, who is a communication professor at St. Edwards University, the film focuses on several cases in Utah, a recent hotbed for officer-involved shootouts and SWAT raids. The militarization of police has steadily grown since the 1960’s. Utah is a microcosm that represents those shifts and trends. Governmental immunity laws in Utah immediately exonerate police officers with little to no questioning of their actions. The film follows Dub Lawrence, a former sheriff who’s obsessed with uncovering the truth about the shooting death of his son-in-law, Brian Wood.

This bravery shown by Dub Lawrence is truly commendable. It is incredibly rare to see current and former law enforcement officers speak out against the system.

Unfortunately when officers do speak out against their own department they are met with horrid backlash from their peers; as was the scenario in the most recent case of an officer calling out the corruption in his department.

Detective Joe Crystal became a target of intimidation for his entire department after testifying against other officers in a misconduct case.  Following his testimony, he received threats from other officers, and even found a dead rat on his car one day.

Because of the negative incentive of speaking out against one’s own department, The Free Thought Project has started a Go Fund Me campaign to help support whistleblower police officers. With enough ‘good cops’ coming out against corruption in their departments, this would help to speed up the awakening process for Americans who still support the police state.