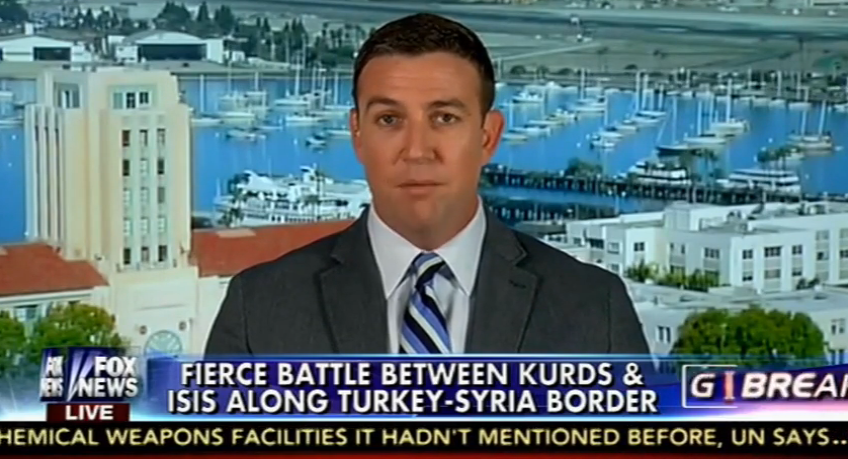 Obama’s DHS denies that this is so, but why wouldn’t it be? What would have stopped them? Under Obama’s disastrous post-American presidency, the Southern border has been flung wide open. The Islamic State has made its intention to strike in the U.S. clear on numerous occasions. Why wouldn’t the jihadis take advantage of the porousness of our Southern border?

WASHINGTON (CBS DC) – Rep. Duncan Hunter, R-Calif., says that at least ten fighters for the Islamic State of Iraq and Syria have been apprehended while attempting to enter the southern U.S. border.

The California Republican claims that “at least ten ISIS fighters have been caught coming across the Mexican border in Texas,” in a conversation with Fox News on Tuesday. Hunter says that the Islamic terrorists are slipping into the U.S. through the porous southern border as several have already been captured.

“There’s nobody talking about it,” Rep. Hunter told Fox. “If you really want to protect Americans from ISIS, you secure the southern border. It’s that simple…They caught them at the border, therefore we know that ISIS is coming across the border. If they catch five or ten of them then you know there’s going to be dozens more that did not get caught by the border patrol.”

“ISIS doesn’t have a navy, they don’t have an air force, they don’t have nuclear weapons. The only way that ISIS is going to harm Americans is by coming through the southern border – which they already have,” he added.

The Department of Homeland Security released a statement on Wednesday that claims alleging Islamic State militants have been apprehended at the Mexican border are “categorically false.”

“The suggestion that individuals who have ties to ISIL have been apprehended at the Southwest border is categorically false, and not supported by any credible intelligence or the facts on the ground,” a DHS spokesman said in a statement today. “DHS continues to have no credible intelligence to suggest terrorist organizations are actively plotting to cross the southwest border.”…