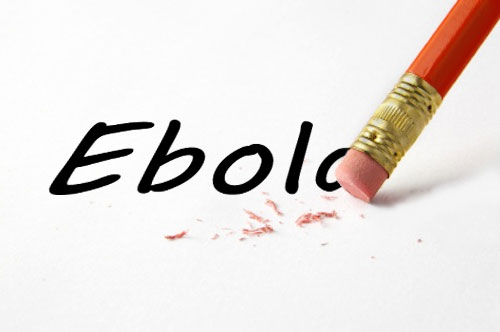 There’s a mysterious phenomenon that keeps happening to alternative media journalists lately, and it seems to be a side effect of Ebola.

Mainstream stories are being removed from the internet without a trace.

The first I heard of this was when a colleague, Mac Slavo, of SHTFplan wrote an article entitled “Disaster Teams Were Notified Months Ago They Would Be Activated in October”. The article was based on a twitter exchange with a large government supplier of emergency response products specializing in “high risk events”.

“DART teams were notified months ago they would be activated in October. Timing seems weird. Source: current DART member.”

What we are now hearing is just the tip of the iceburg as we enter October. #Ebola virus will cripple EMS and hospitals. The wait is over!

@FutureMoneyTren DART teams were notified months ago they would be activated in October. Timing seems weird. Source: current DART member.

Be prepared to self quarantine yourselves if you experience flu like symptoms. Do not venture out as EMS & hospitals will be overwhelmed.

There is speculation that this #DallasEbola case is not Ebola. DART teams were told months ago they would be activated in October.

Wisely, Slavo linked to an archive of the screenshot. 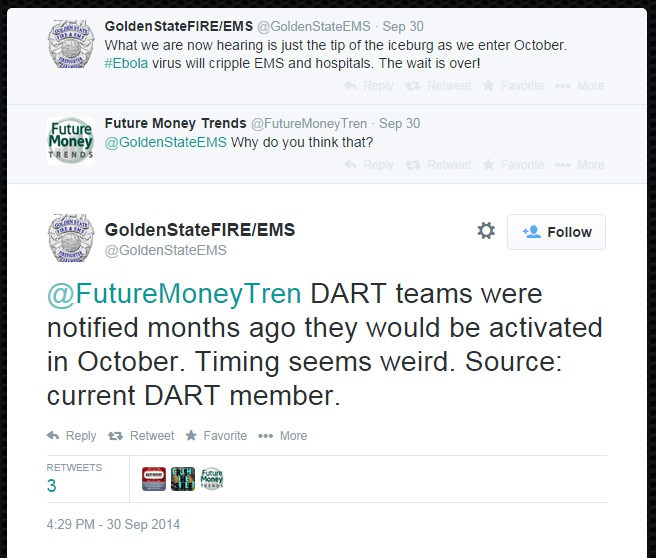 and here’s what you now get when you go to it.

I said, “Wow, that’s pretty weird. Sounds like you were definitely on to something.”  And then I put it out of my mind, because…EBOLA.  We got incredibly busy bringing you the most comprehensive information on the Ebola situation that can be found on any alternative news website.

But then, this happened…TWICE.  Shortly after we quoted a mainstream source in a story that pointed out inconsistencies, the originally story got scrubbed from the internet.  It took all sorts of cache-searching gymnastics to prove that we weren’t the ones lying and that something was definitely being hidden by someone.

The best thing about this is that you, the readers, have been the ones to point out the inconsistencies.

First, there was the story from an Israeli news source that said Thomas Duncan had died. None of the American sources said anything other than “Duncan is fighting for his life”. This was posted on Sunday, October 5th. Here’s a screen shot of the original story. 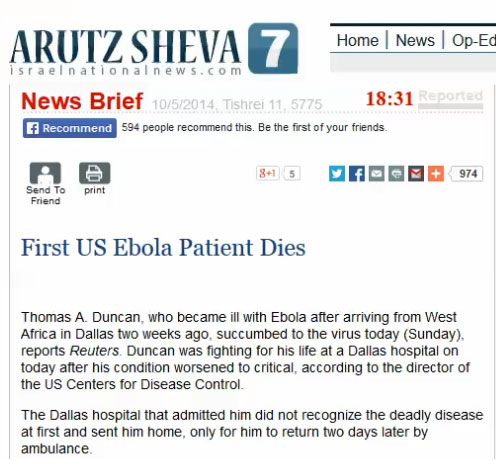 But then, when I went in to moderate comments on the 6th, this appeared:

This must be a parody site akin to The Onion. I went to the link in your article (http://www.israelnationalnews…. and all it had was:

First US Ebola Patient Fighting for His Life

I went in and clicked our original link. Here’s a screen shot of what I saw. Ummm…what? 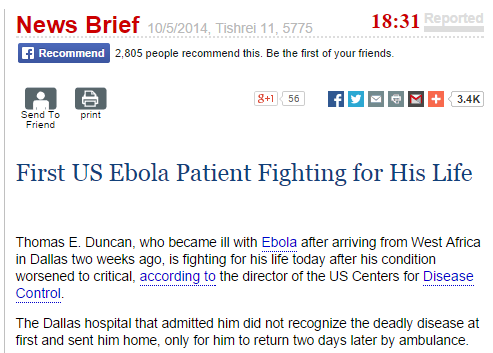 But, sort of like a Ginsu knife commercial, that’s not all. The next issue was also picked up by a sharp-eyed reader, and this is when we realized, “Houston, we have a problem.”

When our reporter, Lily Dane, spied a little blurb buried waaaaaaay in the bottom of a CNN article, she had to write about it. After all, who knew that there were EIGHT confirmed cases of Ebola in Europe? We sure didn’t. Then, just a few hours later, I found this comment:

Is there an actual link to this? The CNN article linked has no mention of Ebola in Europe. I also can’t find any mention of cases in Europe.

Sure enough, the reader was again correct. Anyone noticing a trend here?

This one was covered up even better than the first one. Initially, using our Way Back Internet Archive Time Machine, we couldn’t find the cached page – just a big old field of whiteness where our quote had once been.  Then, Melissa Melton found a cached page with a Fox News article that had quoted the same thing Lily did. Here’s that picture.  (You can click on these to make them big enough to read.) 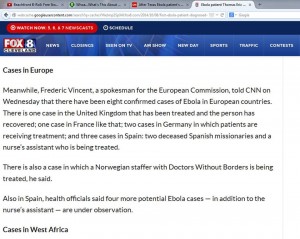 I contacted a nameless friend of mine with some mad computer skills, and he then found a cached version of the original CNN article. It was too big to get in one screen shot.  Click on the photo to make it big enough to read. 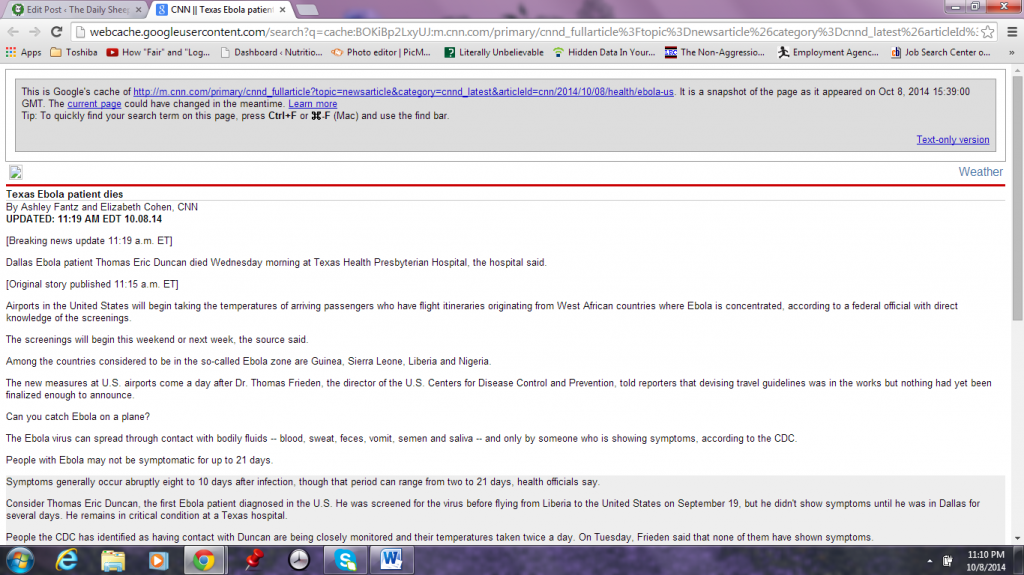 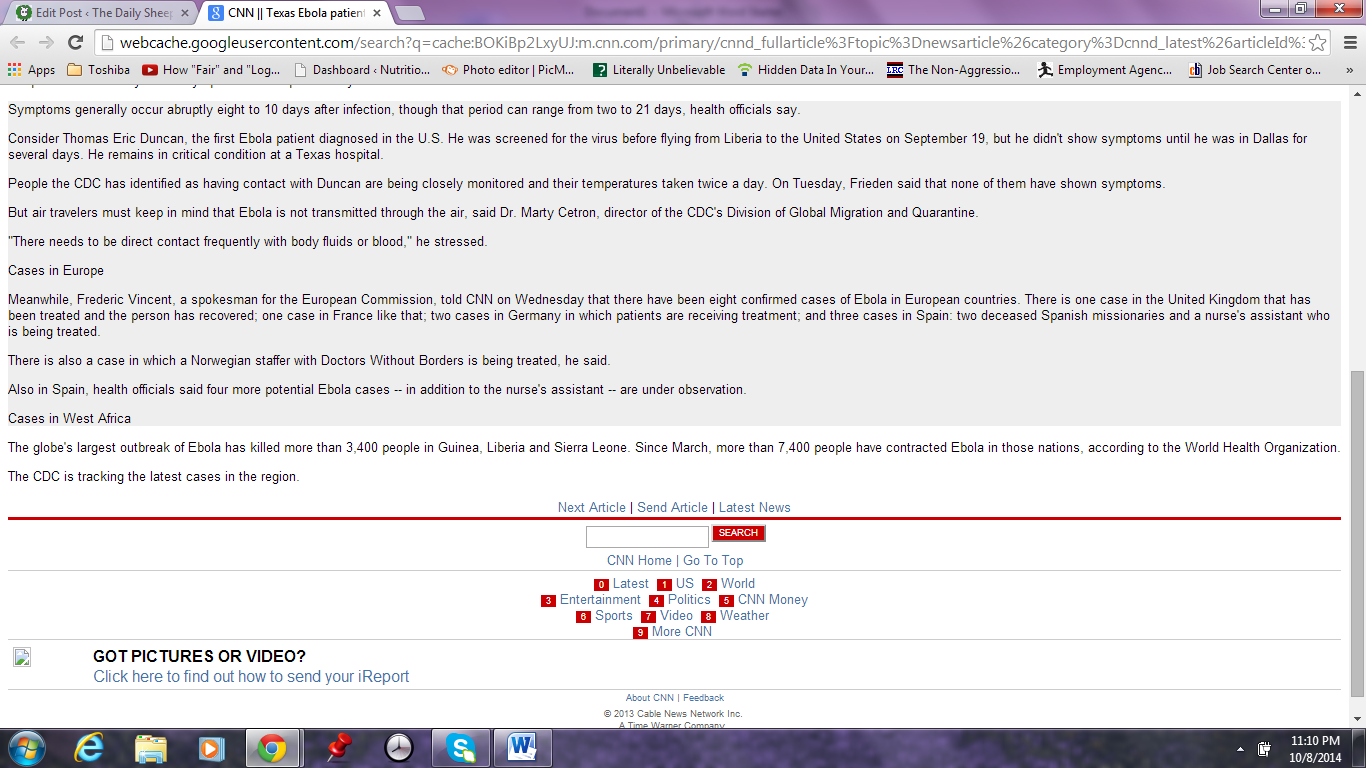 In response to all of these shenanigans, I sent out a memo to all of our staff. It said:

So over the past few days of our Ebola coverage we’ve had a recurring problem. Mainstream sources keep taking down information. Information is being blacked out. Sometimes when we try to find and archived version, the internet has been scrubbed of the information.

Readers follow the links we provide and discover the story says something totally different.

FROM THIS POINT FORWARD:

If you are writing something about Ebola, take a screen shot of whatever source you’re quoting. Make sure the address bar above shows in the screen shot.

This is absolutely necessary and there are to be no exceptions. Our integrity is at stake here.

This has happened too many times to be accidental.

So there you have it, Sheeple readers. This is what has been going on behind the scenes here.  We want to thank you for catching this – you guys make our site better. We vow to continue providing you with the most thorough coverage around. We’ll be backing up what we say with screen shots because we take our jobs, and our reputations for integrity and honesty, very seriously.  Please keep your comments coming, because it is you, the readers, who uncovered this issue.

What’s the common thread here? It sure seems to be Ebola.  What exactly is being hidden? And who’s responsible for instituting the memory hole? And WHY? Let’s hear your thoughts in the comments below.