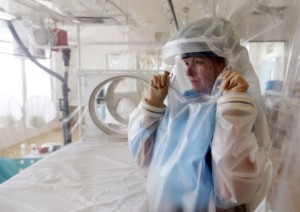 Deputy Head of the World Health Organization Bruce Aylward has warned that Ebola cases are increasing. The BBC reports:

“The disease is entrenched in the capitals, 70% of the people affected are definitely dying from this disease, and it is accelerating in almost all of the settings,” he said.

This is an increase of 20% from the previously admitted 50% fatality rate that has been repeated almost since the start of the epidemic.

The wording of press releases, and the terminology used daily by the mainstream media, is very telling. Most of it seems to boil down to a combination of wishful thinking on behalf of officials combined with the desire to convince the public that there is nothing to worry about.

Look at the definitions of the words ‘outbreak’ and ‘epidemic’ and ‘pandemic’ from the Google online dictionary:

a sudden occurrence of something unwelcome, such as war or disease.

“the outbreak of World War II”

1. a widespread occurrence of an infectious disease in a community at a particular time.

a sudden, widespread occurrence of an undesirable phenomenon.

“an epidemic of violent crime”

1. of the nature of an epidemic.

1. (of a disease) prevalent over a whole country or the world.

1. an outbreak of a pandemic disease.

According to these definitions, Ebola ceased to be an outbreak some considerable time ago, but outbreak sounds far less scary than epidemic or pandemic, both of which could be used to describe the spread of Ebola at this point.

This is similar to the play on words between scientific/medical definition of airborne transmission and the commonly understood definition. The former has strict criteria of droplet sizes and distance traveled etc that has to be fulfilled to qualify a disease of having airborne transmission. This allows them to say there is no airborne spread with Ebola.

The common understanding therefore is that it cannot be spread by coughs and sneezes. Having said that both of those activities allow the release of secretions, or to give them another name, bodily fluids, in the form of saliva and nasal discharges…both of which can support and spread Ebola. So under the common understanding of airborne, Ebola can indeed spread in such a fashion.

We are all aware that the way the government has handled the spread of Ebola is appallingly bad, and many of us have little hope that the situation will improve. Think about the ‘enhanced screening” that has been set up at five international airports. Why have they announced which airports? Those who are looking at getting into the country, even though they have been exposed to Ebola, will just switch airports to one that is not employing ‘enhanced screening’ of travelers from the West Africa. In addition, why just screen those from West Africa? If Ebola is truly going global this will do no good at all.

On the subject of the non-touch temperature taking techniques that border control will be using, well where do I start? It’s incredibly easy to reduce your temperature, a couple of ibuprofen will sort that out. Additionally temperature screening only indicates you don’t have a temperature NOW, not that you won’t have one in three hours time, or tomorrow. It’s a load of crap. The measures being taken are a load of crap. and we are descending, at ever increasing speed, into a load of crap. Talk about closing the stable door after the horse has bolted.

The window of opportunity to prevent a global spread of Ebola has passed. Likening the situation to the Aids/HIV virus is ludicrous. With those conditions you have a considerable time, sometimes years, to deal with the problem. People do not die in a matter of days from AIDS/HIV. There are also a few simple things you can do to prevent catching it.

Not so with Ebola.

The lack of containment facilities for dealing with infected patients is woefully inadequate across the whole of the western world. Just 19 biocontainment beds for the entire population of the United States.

Please God if I get it don’t let me be patient 20.

Of course, other units will be set up, as they were in Madrid, Spain, and we know how that has worked out. The thing is these infection control beds  are not level four units. They don’t have the correct air venting systems, they don’t have the air locks and air pressure units that practically guarantee, if procedures are followed, that there will be no escape of disease.

Enter FEMA camps to ‘protect’ the rest of us.

My gut is telling me that this isn’t going away anytime soon. If you haven’t done it already, the time has come to sit down and have a serious think about the needs of your family and how you are going to fulfil those needs should you have to go into self-imposed isolation.

Prepare like you life depends on it because it probably does.