OK folks let’s get something straight right off the top…Jesse Jackson (in my opinion) is a race-baiting troublemaker, bigot, and hater of anybody white…period.

Now once again butting in where he does NOT belong, Jackson told a Dallas County commissioner that Thomas Eric Duncan was turned away by a Dallas hospital solely because he was black and lacked insurance. But let’s tell the truth here about the man Jackson is defending…Thomas Eric Duncan entered our country from Ebola ridden West Africa…from Liberia… knowing he had contracted the virus…knowing he could infect others on the plane… knowing he could infect others in the apartment complex he went to…knowing that he was bringing a deadly disease into America…and he did NOT give a damn.

And while I hope that he rests in peace, Thomas Eric Duncan is NOT someone we need to have sympathy for nor do we have to buy into the media hype that tries to make him a hero of sorts, as Duncan’s death leaves America knowing that he was ‘Ground Zero’ for one of the biggest scare tactics ever perpetrated on the American public…as his ONE case of Ebola…his ONE case…has brought our country basically to its knees in fear as the media keeps bloviating that Ebola is now here in America. But the fact is that Ebola is NOT here in America…it is NOT running rampant though our population like it is in West Africa…it is NOT here as NONE of the persons confirmed as having Ebola were infected here in our country. Duncan, however, unlike the American doctor, nurse, and photographer who we all knew were infected and who came home for treatment under the most guarded and protective of circumstances, was the ONE selfish man who while infected back home in Liberia still deliberately chose to bring Ebola to America.

And Jackson knows all this but because Duncan was black Jackson and his ilk saw a ripe opportunity to pull the race card out of their pockets yet again.

Leading a prayer vigil with Duncan’s family outside of Texas Health Presbyterian Hospital Dallas last Tuesday, Jackson spewed out his usual ‘it’s the white man’s fault’ mantra…spewed out that when Duncan first went to the hospital he was sent home with antibiotics without getting a complete and thorough exam…without being tested for Ebola…just because he was a poor black man. But the truth is why would he be tested for Ebola when it was he who withheld the much needed information that he had been in direct contact with an active Ebola patient back home in Liberia…and with NO active Ebola here in the U.S. how was the hospital to know…simply…they were NOT.

“Poor, African, without insurance, given a cursory examination. The signs of Ebola were evident,” Jackson said at an all for show press conference. Adding, “From West Africa – it’s most rapid right now in Liberia, Sierra Leone and Guinea – and without health insurance. He was sent back into the community. It did not give him the thorough exam he deserved”…and all I can say is…’LIAR.’

And now after Duncan’s death, Jackson, appearing at the request of Duncan’s family, lambasted hospital officials for “sending Ebola back into the community”… which is an unadulterated lie that he hopes the public will buy into. Buy into as dollar signs flash before his eyes as Jackson’s bloviations are all about money and NOTHING else…money…BIG money…as Duncan’s family is now suing the hospital, egged on by Jackson himself. And we all know race-baiting, hate, and perceived racial disparity is big business…a business where a few like Jackson amass great wealth at the expense of their own people.

And again, Duncan did NOT tell hospital officials where he was from or the contact he had with an active Ebola patient…doctors and nurses are NOT mind readers you know. And Duncan’s family who are also guilty of NOT telling hospital officials his history the first time he presented himself…are NOT entitled to nor should they NOT get one bloody dime…and Jackson needs to butt-out…period.

But Jackson butting out is like Obama telling the truth…and we know neither will happen. In fact, Jackson continued on in a Tuesday blog entry on the Huffington Post, where he had the nerve to post that, “What role did [Duncan‘s] lack of privilege play in the treatment he received? He is being treated as a criminal rather than as a patient…As followers of Jesus, we are called to work for the day when those with privilege, most often white people, have greater access to better medical care than those whom Jesus calls ‘the least of our sisters and brothers.'”

Jesse Jackson evoking the name of Jesus…especially using His name to spew racial hate and bigotry…is paramount to Eric Holder being a spokesperson for the NRA…is paramount to Barack HUSSEIN Obama being a Christian. 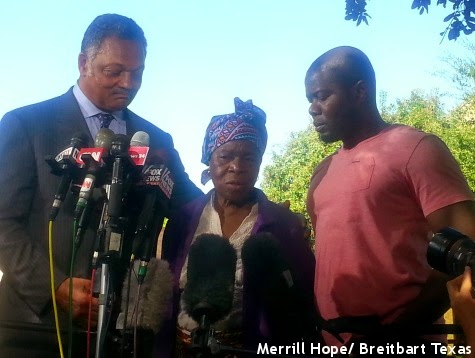 And to add to the grievousness of this whole situation, of course Jackson tried to imply that Ebola being in America is all the Republicans fault because the Texas response to Duncan would have been better if state leaders and legislators had NOT opposed ObamaCare. “Maybe the fact that Southern states from Virginia around to Texas rejected Affordable Care, rejected $100 billion and Medicaid, there would no doubt be a better infrastructure for poor people all across Texas and the South,” Jackson said.

Laughable words at best as poor people get better care than working class people for they can walk into any emergency room in this country and NOT be turned away whether they have insurance or NOT. And lest we forget that while Duncan might have been poor he was NOT an American…he was NOT a resident…he held NO ‘green card’…yet America is supposed to go above and beyond for him…above and beyond for a man who did NOT care that he knowingly and willingly brought one of the most deadly diseases known to man into our country…I think NOT. And this has NOTHING to do with the color of his skin but everything to do with the selfish, ‘all about me’ attitude of a man who had NO business boarding that plane… who had NO business lying to officials before he even did so.

And let’s NOT forget that all Jackson’s bloviations were played to a commission who also is of the ‘everything is whitey’s fault’ mentality. Commissioner John Wiley Price called the issue of race in Duncan’s case the “elephant in the room.” Now he is entitled to his opinion of course, but following those words up with, “We know why what happened at Presbyterian happened. It’s historically what has happened in this community…if a person who looks like me shows up without any insurance, they don’t get the same treatment,” shows that for Price…with his words “who looks like me”…just like for Jackson….everything is about race and NOT about the fact that Duncan lied from the time he applied for his visa in Liberia all the way up until the day he was admitted to the hospital in the throes of full blown Ebola.

Don’t you just love how for Jackson, Price, and the other race-baiters, these pesky little facts keep getting in the way. 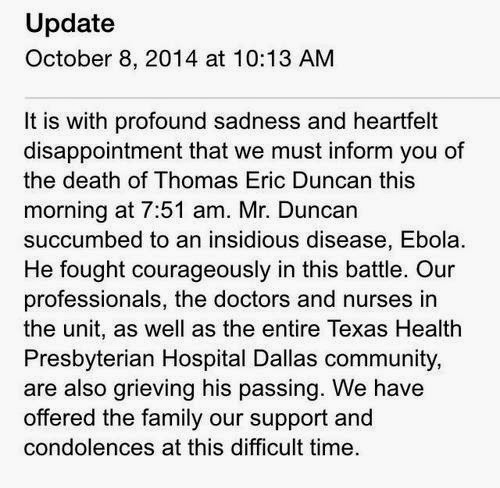 Thankfully, Texas Health Presbyterian Hospital Dallas is fighting back against Jackson’s and Price’s racism accusations, and against a family who see their relative’s death as their personal cash-cow. By issuing a statement saying that, “He (Duncan) was treated the way any other patient would have been treated, regardless of nationality or ability to pay for care…we have a long history of treating a multi-cultural community in this area,”that should have ended this blame game once and for all, but in today’s America…an America where reverse racism is allowed to run rampant and unchecked…our taxpayer dollars will now be wasted on a federal and state investigation into Texas Health Presbyterian Hospital Dallas for initially turning Duncan away and failing to screen for Ebola. Failing to screen for Ebola when Jackson and Price claim he was experiencing Ebola-like symptoms.

Today, Saturday, October 11th, from 11am to 2pm EST on RIGHT SIDE PATRIOTS on CPR Worldwide Media, Craig and Diane will be discussing the important issues of the day ranging from ISIS to Ebola to all things Obama and more.

Hope you all will tune in…http://cprworldwidemedia.com/liveradio/

and chat with us live at…
https://www.facebook.com/groups/cprworldwidemedia/