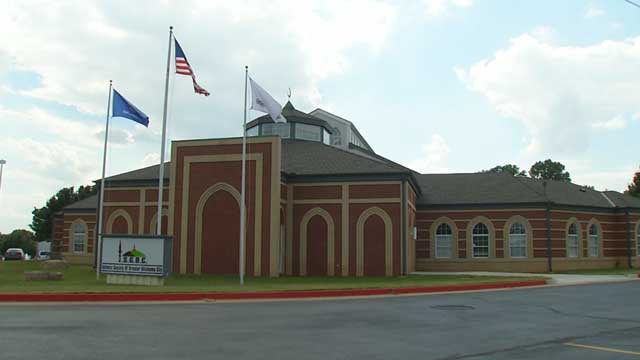 At the end of September, Alton Nolen (aka Jah-Keem Yisrael) walked into his former place of employment after trying to convert fellow employees to Islam and began stabbing a woman, eventually decapitating her and went after another employee before being brought down by Mark Vaughn, the former CEO of the company, with shots from his gun. Jah-Keen Yisrael attended Islamic Society of Greater Oklahoma City, a mosque that has called for the destruction of the United States and Israel and taught to Islamic doctrine of the Caliphate. Like a good Muslim supporter, Barack Obama took time to write a letter to the mosque and have it hand delivered by and Obama administration official while ignoring the funeral of Yisrael’s victim.

During a prayer service at the mosque, the imam read to his congregation the words of Hussein Obama.

“Your service is a powerful example of the powerful roots of the Abrahamic faiths and how our communities can come together with shared peace with dignity and a sense of justice,” Obama wrote.

The imam also said during his sermon that the Islamic faith has been called a “cancer that needs to be cut off from the American society.”

Well friends, let me be frank, it is a cancer and it does need to be cut off not only from American society, but from all socieities. In fact, to praise this mosque for their “service” being a “powerful example” for producing a man that carried out Islamic jihad, beheading a woman and stabbing another, is absolutely sickening. And don’t tell me Islam doesn’t teach this stuff! It does, as we’ve recounted over and over and over again.

Let’s be clear here. Islam is not an “Abrahamic faith.” It is a God damned ideology that flies in the face of the God of Abraham. How do I know that? Listen to the words of the Lord as he spoke to Abraham about who His promise would come through:

And Abraham said unto God, O that Ishmael might live before thee! And God said, Sarah thy wife shall bear thee a son indeed; and thou shalt call his name Isaac: and I will establish my covenant with him for an everlasting covenant, and with his seed after him. And as for Ishmael, I have heard thee: Behold, I have blessed him, and will make him fruitful, and will multiply him exceedingly; twelve princes shall he beget, and I will make him a great nation. But my covenant will I establish with Isaac, which Sarah shall bear unto thee at this set time in the next year. –Genesis 17:18-21

The promise of God, which was the Messiah (Gal. 3:16), came through the line of Isaac, not Ishmael, who became the father of the Arab world. Only those that have the faith of Abraham are the sons of Abraham:

Even as Abraham believed God, and it was accounted to him for righteousness. Know ye therefore that they which are of faith, the same are the children of Abraham. And the scripture, foreseeing that God would justify the heathen through faith, preached before the gospel unto Abraham, saying, In thee shall all nations be blessed. So then they which be of faith are blessed with faithful Abraham. –Galatians 3:6-9

Do you understand? Islam rejects the Lord Jesus. I know they call him a prophet, but they reject the incarnation, that the Word took on Flesh and dwelt among men (Immanuel, God with us). Such people are antichrists, according to John, the apostle that Jesus loved. Antichrist is not a person, it’s a doctrine one holds.

And every spirit that confesseth not that Jesus Christ is come in the flesh is not of God: and this is that spirit of antichrist, whereof ye have heard that it should come; and even now already is it in the world. 1Jo 4:3

For many deceivers are entered into the world, who confess not that Jesus Christ is come in the flesh. This is a deceiver and an antichrist. 2Jo 1:7

Barack Obama is known for his lies and Islam is known for its deception and practice of taqiyyah. This is nothing new, but it does need to be pointed out. Islam is not an Abrahamic faith, but a doctrine of demons.

Yet, Barack Obama, like his predecessor George W. Bush, would have you believe that Islam is equal with Christianity. It is not.

The faith of America’s fathers was not Islam. In fact, it was anti-Islamic. Just recall what America was founded upon in the words of the Pilgrims in the Mayflower Compact:

In the name of God, Amen. We, whose names are underwritten, the loyal subjects of our dread Sovereign Lord King James, by the Grace of God, of Great Britain, France, and Ireland, King, defender of the Faith, etc.

Having undertaken, for the Glory of God, and advancements of the Christian faith and honor of our King and Country, a voyage to plant the first colony in the Northern parts of Virginia, do by these presents, solemnly and mutually, in the presence of God, and one another, covenant and combine ourselves together into a civil body politic; for our better ordering, and preservation and furtherance of the ends aforesaid; and by virtue hereof to enact, constitute, and frame, such just and equal laws, ordinances, acts, constitutions, and offices, from time to time, as shall be thought most meet and convenient for the general good of the colony; unto which we promise all due submission and obedience.

In witness whereof we have hereunto subscribed our names at Cape Cod the 11th of November, in the year of the reign of our Sovereign Lord King James, of England, France, and Ireland, the eighteenth, and of Scotland the fifty-fourth, 1620.

Finally, Megyn Kelly recently interviewed an alleged Islamic Society of Greater Oklahoma City mosque attendee, which is worth your time to watch: