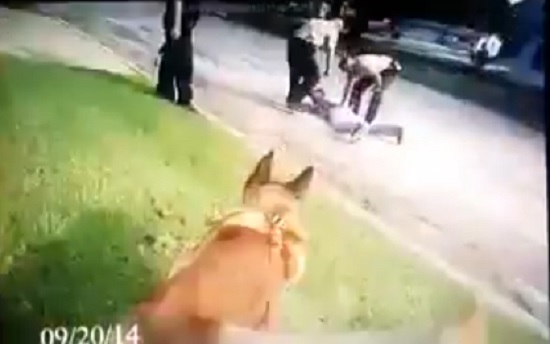 Green Forest, AR — A disturbing body cam video was uploaded to Facebook Thursday which shows a Green Forest police officer let go of his K-9 after other officers had a suspect face down and in handcuffs.

The graphic video does not lie.

According to a report by Officer Tucker Mallett of the Green Forest Police Department, he was called to Garden Gate Apartments on the afternoon of Sept. 20 to investigate a possible disturbance involving a gun. Upon arriving, Mallett called Officer Irvin Earles in for backup. CCSO deputy D.J. Harlan, along with his K-9, Tyson, and another deputy arrived to provide further assistance around the same time.

As the officers approached the apartment a resident told them that Brennan Badley was inside with a gun. Badley then ran out the back door. The video starts as we see Badley non-violently surrender with his hands on his head and he is laid face down on the ground, cuffed and searched.

During the arrest we can see the K-9 unit barking and jumping toward Badley. Seemingly throwing common sense to the wayside, officer Harlan who is holding the angry K-9 walks closer to the suspect. At this point the K-9 is let loose on the suspect. Regardless of whether this release of the K-9 was intentional, the end result was the same.

Badley is screaming in agony as the K-9 is chewing apart his inner thigh. The officers are unable to unlock the dog from the man’s leg. Their only reaction is to yell at Badley telling him to stop moving; because remaining calm and lying still while being eaten alive is a natural reaction.

Miraculously, Badley does become calm, but this does not stop the attack. He is lying their, moaning in pain, as the dog is allowed to chomp down next to his most sacred of bodily regions.

Finally after the dog has torn apart the man’s clothing, and leg, it lets go. What happens next is nothing short of infuriating. The officer who was responsible for letting loose the K-9, D.J. Harlan, begins to place blame on the handcuffed man who jolted as a natural reaction to being attacked by their dog.

“When I say don’t move, don’t move. When you have a K-9 sittin’ there, don’t fuckin’ move, until your told to,” says Harlan.

CCSO Lt. Michael Zimmerman explained that the dog reacted to Badley’s movement according to his training. “It’s not like this particular dog just runs and bites anyone who is around,” he said. “There are specific things he looks for. This guys rolls over on his right side and Tyson thinks he’s trying to run away.”

In a way, Zimmerman is correct, it’s not like this dog runs around loose, its not like it runs around at all, as it is on a leash! The dog is trained to attack who the police tell it to attack, they are not, and should not be a threat to anyone unless the officer allows them to be. Harlan allowed this dog to be a threat and is therefore, either through negligence or malice, responsible for the damages caused to Badley.

Badley was transported to Mercy hospital in nearby Berryville to be treated for his injuries, where he also admitted to tossing a gun after police showed up.

Badley was arrested on a previous warrant for first-degree criminal mischief. He was not charged in connection with the incident that led to the dog bite.