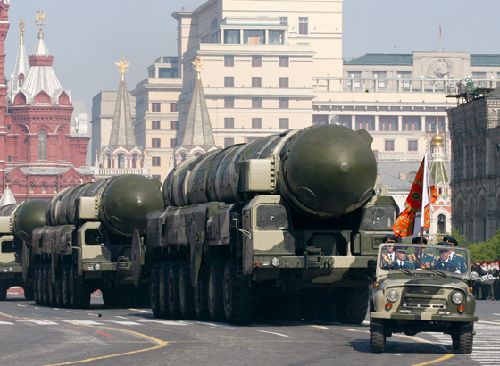 Day after day, the scene in Ukraine seems to be looking more and more unstable. The brinksmanship of the Cold War appears to be making a comeback in Europe, as Russia asserts its claims over Ukraine. Recently, Putin has ordered the Russian military to begin moving tactical nuclear weapons into Crimea, as well as several Tu-22 nuclear armed bombers.

The event has U.S. lawmakers in an uproar, and NATO officials shaking in their boots (or at least that’s how I imagine them). They’re throwing around terms like “treaty violation” and “menacing threats to Europe”. Meanwhile, those same U.S. officials seem to be thinking in very obsolete terms.

“Locating nuclear weapons on the sovereign territory of another state without its permission is a devious and cynical action,” states the letter signed by House Armed Services Committee Chairman Howard P. “Buck” McKeon (R., Calif.) and two subcommittee chairmen.

“It further positions Russian nuclear weapons closer to the heart of NATO, and it allows Russia to gain a military benefit from its seizure of Crimea, allowing Russia to profit from its action.”

They can’t accept that the Crimea is no longer the sovereign territory of Ukraine. Whether the actions of the Russian government are right or wrong, is irrelevant. They’ve taken Crimea, a region that has belonged to Russia for longer than the U.S. has even existed, and the place is just lousy with ethnic Russians (who’d have thought?).

Russia is not giving it up. At least not without a fight. However, our government officials can’t seem to wrap their minds around that. All they can do is frown and bluster “How dare they? Don’t the Russians know that we’re America? Don’t they realize that we’re unbeatable? That our whim is law?”

They don’t care. The Russians don’t respect posturing, least of all from us. And why should they? After decades of NATO encroachment into Eastern Europe, military encirclement with bases and missiles, U.S. backed color revolutions, and now sanctions, what should we expect them to do?

I’m not saying that Putin’s government is the good guy here, but I am saying we shouldn’t be surprised by their actions. It almost sounds like our government is the bully, doing everything he can to belittle someone else. When that someone finally starts fighting back, we run to the teacher and tattle. We call the U.N. and say “They can’t do that! That’s Ukrainian Territory! You can’t invade another country whenever it suits you!” As if our government would never do such a thing.

To top it all off, the U.S. Government’s reaction to Crimea has been downright schizophrenic.

In a related development, the Obama administration is funding non-official arms control talks with Russia through a Washington think-tank that are aimed at curbing U.S. tactical nuclear arms in Europe.

The first round of talks was held in Vienna Monday and Tuesday.

Such cuts are likely to be opposed by NATO allies, especially in Eastern Europe, worried by growing Russian military threats to the continent.

After everything we’ve done to antagonize Russia, Obama is still busy trying to reduce our nuclear deterrent in Europe. It’s like we’re trying to goad them into war, while at the same time we’re laying down our arms. No wonder the world has lost all respect for us. Our actions have all the makings of a crazy person. Our government has become nothing more than a heavily armed bully in a straightjacket.

Make no mistake, Russia is not in the right either. Putin is still a tyrannical oligarch, with delusional aspirations for a new Russian Empire. But, why have we spent the past two decades antagonizing that nuclear armed regime? How is any of this a good idea?

In short, it isn’t. It’s bad for Americans and it’s bad for Russians. The fact that our nations are marching straight into a new cold war proves only one thing. We do not share the same interests as our government. Our institutions are run by power hungry madmen, willing to risk war if it will give them global supremacy. They’ll drag us kicking and screaming into World War Three, whether we like it or not.