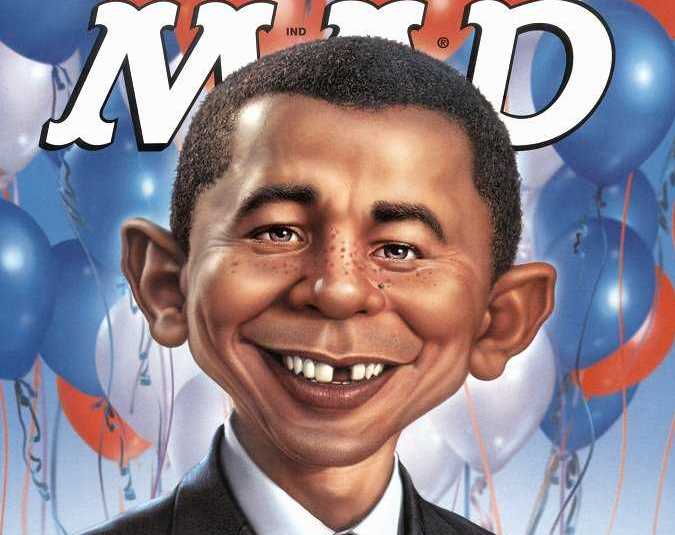 The once haute couture No Drama Obama has fumbled his way to the “What me worry?” of Alfred E. Newman.

After almost six full years of the coolest, smartest, least prepared president America has ever had, it has become obvious, even to the corporations once known as the mainstream media, that except for efforts to transform America into a Social Democracy, we are rudderless.

In Josh Kraushaar’s “Obama’s Pass-the-Buck Presidency” in the National Journal, we are told, “The president has a pattern of deflecting blame and denying responsibility.” After an off-duty officer tackled the recent fence jumping knife totting intruder in the White House, after a gun-toting felon was allowed on an elevator with the President, and after it was revealed that there have been more than a thousand security breaches on Obama’s watch, one Secret Service Agent told a Congressman recently, “We just keep getting lucky.”

There, in a capsule, is our hope for America. Let’s just hope we keep getting lucky. We have been able to survive the Clinton interlewd. We survived George II and his endless wars for peace. If we are lucky, we will survive BHO and his campaign to remake America. That is a big if.

While President Obama seeks to throw the Intelligence Community under the bus for his failure to react to the rise of ISIL, it turns out that he has been getting explicit warnings all year. Now we learn that he skips over half of his intelligence briefings, or as one source at the State Department puts it, “He receives briefings whenever he can.” One Obama national security staffer said, “Unless someone very senior has been shredding the president’s daily briefings and telling him that the dog ate them, highly accurate predictions about ISIL have been showing up in the Oval Office since before the 2012 election.”

Maybe if we put the cover of Golf Digest on the intelligence briefings, they would get a closer read? Perhaps somebody could put them in the 10 letters he reads every day to stay connected to the common people.

Whether or not you agree with the president’s new war, the fact that he seems to learn everything from watching the news should be disturbing to anyone. Especially since anyone who has been watching the news knew about ISIL – at least, since they captured Fallujah – back in January. It makes me wonder what news is he watching: The Daily Show?

They called Reagan the Teflon President because no matter what happened, nothing ever seemed to stick to him. Perhaps we should call BHO the Teleprompter President. It seems as if he doesn’t read it on his teleprompter, he doesn’t know about it. Then again, without the teleprompter and the Hollywood script writers, he doesn’t sound quite as slick as we usually hear him in his stage-managed photo ops.

Or perhaps it is as the corporations once known as the mainstream media spin it: “Obama is so smart that his mouth can’t keep up with his brain.” This explanation resonates in Academia where Presidential Historian Michael Beschloss is on record stating that BHO is the smartest man to have ever been elected president, even though he admits he has no idea about the president’s IQ. Or, as Mark Steyn explains the spin: he is just too smart to be President, and we were too dumb to know he was too smart.

Just like the legions of economists who are constantly surprised by whatever seems to happen next, our Teleprompter President is waiting to see what he reads next to know what happened yesterday. Perhaps we should change our national anthem to “Don’t Worry Be Happy,” our national motto to “What me worry?” and our national pastime to watching BHO golf.

So, our soon-to-be lame-duck president rides his golf cart into the sunset singing, “It ain’t me Babe, no, no, no it ain’t me babe,” blaming everyone else for everything—or, as Bart Simpson is wont to say, “I Didn’t Do It, Nobody Saw Me Do It, There’s No Way You Can Prove Anything!”