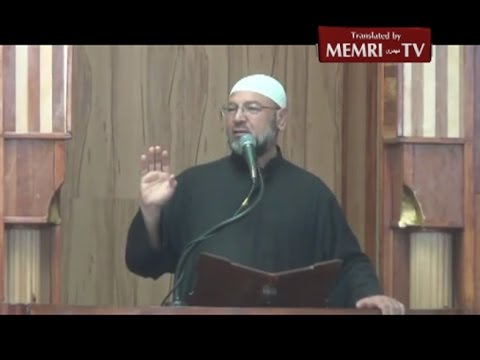 And we are admonished daily that we must respect this savagery, that we must tolerate this evil, that we are to submit to this subhuman cult.  And anyone who opposes this horror is “racist” “islamophobic” and “bigoted.”

Ben Affleck is their spokesman. And anyone who goes to see his new film (Gone Girl) and puts money into the pocket of this stooge is aiding and abetting the jackboots of tyranny.

Islamic Jew-hatred – it’s in the Quran.

Denmark Sermon: There Can Be No Division Of Palestine With The Offspring Of Apes And Pigs

In a sermon delivered in Funen (Fyn), Denmark, Sheik Muhammad Khaled Samha asked: “How can we… accept the division of Palestine between [the Palestinians] and a gang of Jews, the offspring of apes and pigs?” MEMRI, October 12, 2014

Following are excerpts from the sermon, which was posted on the Internet on September 19, 2014:

“So how can we – or any free Muslim with faith in his heart – accept the division of Palestine between [the Palestinians] and a gang of Jews, the offspring of apes and pigs?”

“Oh beloved ones, the land of Palestine is Islamic waqf, by consensus of the scholars of the Islamic nation. Whoever relinquishes even a single inch of it is betraying Allah and the Prophet Muhammad. Mahmoud Abbas and his ilk can relinquish their right to their homes, but there is no doubt whatsoever that they do not have the right to relinquish the right of the Islamic nation to Palestine.