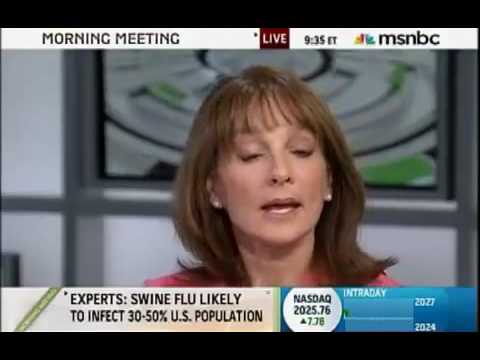 A doctor who made headlines back in 2010 during the swine flu scare when she told MSNBC viewers, “just get your damn vaccine” didn’t show such concerns for public health when she was caught violating an Ebola quarantine in order to pick up her favorite soup.

NBC Chief Medical Correspondent Dr. Nancy Snyderman was spotted on a food run in New Jersey despite being under a 21 day quarantine order after her return from West Africa during which Snyderman and her team were exposed to Ebola victim Ashoka Mukpo, who works as a cameraman for the network.

“Witnesses claimed the physician and broadcaster wore sunglasses and a ponytail as she pulled up outside the eatery and a man dashed in to grab the order,” reports MailOnline.

Both Snyderman and NBC News refused to comment on the story.

“The NBC crew remains symptom-free, so there is no reason for concern of exposure to the community,” spokeswoman Dawn Thomas said.

However, it can take up to three weeks for symptoms to show and some evidence suggests that individuals who are asymptomatic can still spread the disease.

NBC News President Deborah Turness said the network had, “agreed with state and local health authorities that our team will not come to work, and they will stay at home.”

By violating the quarantine order, Snyderman is displaying little concern for public health, a stance that differs from her tone during a 2009 appearance on MSNBC during the height of the swine flu panic when she ordered Americans to, “just get your damn vaccine.”

“Forget the conspiracy, listen to our government agencies, these guys are telling the truth, you know there’s no conspiracy here folks – just get your damn vaccine!” said Snyderman during her appearance on the show.

In reality, government agencies were not telling the truth about the swine flu vaccine according to Wolfgang Wodarg, head of health at the Council of Europe, whose investigation found that the outbreak was a “false pandemic” driven by drug companies that stood to make billions of pounds from a worldwide scare.”

Primarily as a result of Snyderman and her ilk creating hysteria by overhyping the threat posed by swine flu, millions of people worldwide received a vaccine that they didn’t need, which in some cases caused illnesses, and which wasted millions of dollars in public health funds.