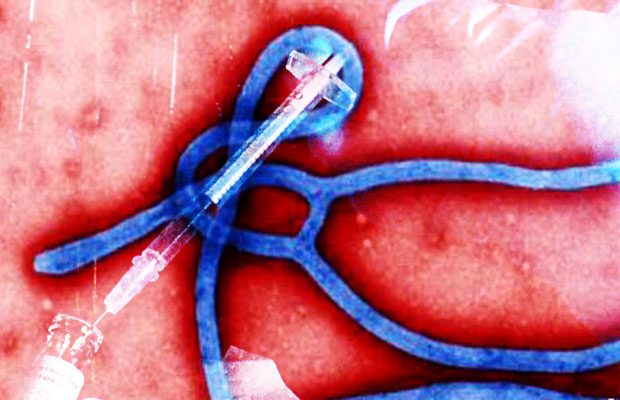 The first human trials of a Canadian Ebola vaccine began Monday, part of a flood of experimental therapies rushed into testing to battle the Ebola epidemic.

Great. Another experimental vaccine is being fast-tracked and rushed out thanks to a carefully planned fearporn propaganda campaign designed to ultimately make Big Pharma a lot of big profits. No one is talking about any natural alternatives, underlying nutritional deficiency issues or water treatment problems already plaguing Africa, or the fact that even the guy who designed the Ebola test says it’s unreliable or the fact that stories have leaked out, here and there, in the African newspapers that people are purposefully poisoning city water wells with formaldehyde which, when ingested, can cause corrosive injuries that appear much like the symptoms of late-stage Ebola.

Also the phrase “a flood of experimental therapies” is perfectly timed for October, because it’s scary as hell. Who knows what’s in those syringes.

Although the world has been fighting Ebola since 1976, major drugmakers showed little interest in the disease because outbreaks were small and sporadic, said Thomas Geisbert, a professor at the University of Texas Medical Branch, who has studied Ebola and tested drugs against it for many years.

For more on that, watch this clip of a doctor being interviewed by Bloomberg who straight up says that there wasn’t enough panic and paying customers to necessitate the creation of an Ebola vaccine.

“These all take a lot of money and right now in the history of what we know at least, there have been fewer than 5,000 people who have been infected with Ebola. It sounds scary, but I don’t know that there’s enough…uh…panic or enough people who are potential customers for these drugs to warrant a company — a private company anyway — putting the money it would take to develop this.” [emphasis added]

Watch the video. The good doctor even struggles to find his words before he says he isn’t sure there is enough panic and customers to warrant developing a vaccine.

A “small and sporadic” number of people dying — albeit in a horrible, awful way that’s the stuff of nightmares — simply does not translate to profits.

Because now, of course, every time a new American gets diagnosed with Ebola, the stocks for companies working on all these experimental drugs and shots shoot straight up. Motley Fool referred to this as “emotional trading.”

“Shares of Ebola vaccine developers, such as Tekmira Pharmaceuticals and NewLink Genetics soared by as much as 25% and 12%, respectively, following the first confirmed Ebola diagnosis yesterday afternoon from the Centers for Disease Control and Prevention of a person in Dallas,” the site declared on October 1st after Ebola Patient Zero Thomas Eric Duncan was officially diagnosed.

Ebola research got a jump-start after the terrorist attacks in 2001 as the government funded studies to prepare for possible bioterror attacks, said Anthony Fauci, director of the National Institute for Allergy and Infectious Diseases.

Uh-huh. The events on 9/11/2001 were used to further all sorts of government agendas, weren’t they? By the way, were those studies carried out in the Ebola hot zone countries? That’s where U.S. bio-warfare researchers just so happen to have been hanging out studying Ebola for the last few years prior to this latest outbreak… Curiously…

Only the current Ebola outbreak in West Africa, the biggest in history, has succeeded in moving experimental drugs and vaccines into larger clinical trials. There are no approved drugs or vaccines on the market, so several Ebola patients have received experimental medications.

Sounds like all this mass public fear is smashing good timing, then! Reminds me of a another story I saw on The Guardian titled, “Ebola is in America — and, finally, within range of Big Pharma,” byline: “Research into tropical diseases is chronically neglected, but the horror of this epidemic could transform the battle against them.”

The USA Today story goes on to talk more about this vaccine and the other rushed-to-testing shots in play at the moment:

A vaccine developed by the Public Health Agency of Canada began testing Monday at the Walter Reed Army Institute of Research in Silver Spring, Md.

The vaccine uses a vesicular stomatitis virus (VSV) to deliver its payload and offers promise for preventing and treating Ebola, Hotez said.

VSV…isn’t that in the rabies category? Better check it. Via Wikipedia:

Vesicular stomatitis Indiana virus (VSIV) (often still referred to as VSV) is a virus in the family Rhabdoviridae; the well-known rabies virus belongs to the same family. VSIV can infect insects, cattle, horses and pigs. It has particular importance to farmers in certain regions of the world where it can infect cattle. This is because its clinical presentation is identical to the very important foot and mouth disease virus. The virus is zoonotic and leads to a flu-like illness in infected humans.

Oh goody. Sounds like something straight out of the zombie horror movie 28 Days Later

This vaccine isn’t the only one, either. A researcher at Thomas Jefferson University, in a partnership with the National Institutes of Health (NIH), is currently working on an Ebola vaccine that will straight up piggyback off the actual rabies vaccine.

“We think everyone in equatorial Africa should be vaccinated against both rabies and Ebola,” microbiologist Matthias J. Schnell said.

The Philly Inquirer article goes on to note that the Walter Reed Army Medical Center plans to have a 2,000-dose batch of Schnell’s concoction prepared for testing by the end of next month.

Big Pharma giant Glaxosmithkline (GSK) is already working on another vaccine in conjunction with NIH using an adenovirus, a common cause of respiratory illness. GSK has already begun preparing 10,000 doses of the experimental vaccine for a World Health Organization emergency vaccination program, you know, if clinical trials (the short, fast-tracked kind rushed into testing due to the outbreak) go “well”.

Dr. Fauci, the director of the NIH’s National Institute for Allergy and Infectious Diseases (the government outfit working with GSK) has recently told The Canadian Press that he believes a mass vaccination program will likely be required to stop this Ebola outbreak (via Modern Healthcare):

“It is conceivable that this epidemic will not turn around even if we pour resources into it. It may just keep going and going and it might require a vaccine.”

“As the epidemic gets more and more formidable and in some cases out of control it is quite conceivable, if not likely, that we may need to deploy the vaccine to the entire country to be able to shut the epidemic down. That is clearly a possibility.” [emphasis added]

Scientists are now claiming that, to go about testing these drugs in the normal fashion with placebo groups etc. would be “unethical” because it would mean denying patients at high risk of death potential treatment. What that really means is ultimately a skewed set of data in a hard-to-lose situation for pharmaceutical companies testing out otherwise risky products on people like lab rats.

So does it follow then that if the treatment kills a few people in the process, they would’ve died anyway and that makes it all a-okay?

You know, ten years ago… Long before this Ebola outbreak and the resultant panic spreading like a global wildfire… Scientific American was asking back in 2004, “How do you test that a human Ebola vaccine works?”

The answer given then?

Gee, a lot has changed in a decade, hasn’t it?