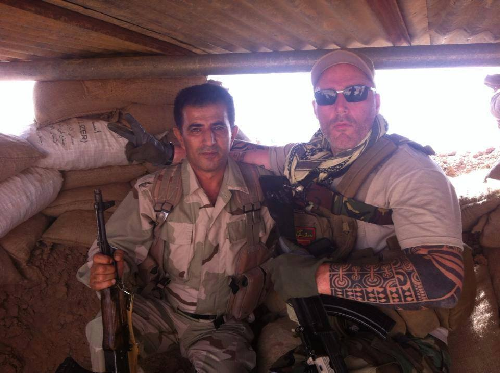 During the Spanish Civil War, tens of thousands of foreign nationals from across the Western world flooded into the country. They formed dozens of “international brigades“, and fought against Francisco Franco and his German and Italian allies. Throughout history, the reasons for volunteering for such a cause have often been misguided. During the Spanish Civil War for instance, most of those volunteers were fighting for the Communists, just so they could fight the Fascists. Not much of an improvement if you ask me.

Since then, there hasn’t been a conflict that has inspired so many young westerners to leave the comfort of their homes to volunteer in a war outside of their borders (and without permission from their government). That is until now.

While there’s been many reports of thousands civilians from across Europe joining ISIS, now it appears that members of the Dutch No Surrender biker gang, have been traveling to Iraq to fight the against the Islamic state.

The Dutch public prosecutor said on Tuesday that motorbike gang members who have reportedly joined Kurds battling the Islamic State group in Iraq are not necessarily committing any crime.

“You just can’t join a fight against the Netherlands,” he told AFP after reports emerged that Dutch bikers from the No Surrender gang were fighting IS insurgents alongside Kurds in northern Iraq.

The head of No Surrender, Klaas Otto, told state broadcaster NOS that three members who traveled to near Mosul in northern Iraq were from Dutch cities Amsterdam, Rotterdam and Breda.

Perhaps there is a less than altruistic reason for a gang member to fight ISIS, but so far it has yet to be seen. Sometimes good deeds come from where you least expect them. Sometimes people do things so despicable to their fellow man, that even the other bad guys can’t stand to sit back and watch.

While joining ISIS is obviously misguided, I can’t see anything wrong with civilians fighting against them. If anything it’s preferable to how most wars are fought. The next time somebody tries to convince you we should go to war in foreign country we have no business being in, tell them to grow a pair and go fight it themselves.