A new report from the Bulletin of the Seismological Society of America (BSSA) has highlighted four sections of the San Andreas fault that are locked in place and building up pressure.

Fault creep describes the slight slips, and the release of small amounts of pressure that build up on fault lines. Without the creep that most faults exhibit, the pressure builds and builds until there is a major earthquake when the ‘stuck’ rocks suddenly move and the pressure is released.

The BSSA study has highlighted four areas where creep is not currently occurring. From Science Daily:

This study estimates how much creep occurs on each section of the San Andreas Fault system in Northern California. Enough creep on a fault can diminish the potential size of its next earthquake rupture.

“The extent of fault creep, and therefore locking, controls the size and timing of large earthquakes on the Northern San Andreas Fault system,” said James Lienkaemper, a co-author of the study and research geophysicist at U.S. Geological Survey (USGS). “The extent of creep on some fault sections is not yet well determined, making our first priority to study the urban sections of the San Andreas, which is directly beneath millions of Bay Area residents.”

Understanding the amount and extent of fault creep directly impacts seismic hazard assessments for the region. The San Andreas Fault system in Northern California consists of five major branches that combine for a total length of approximately 1250 miles. Sixty percent of the fault system releases energy through fault creep, ranging from 0.1 to 25.1 mm (.004 to 1 inch) per year, and about 28 percent remains locked at depth, according to the authors.

Monitoring of creep on Bay Area faults has expanded in recent years. The alignment array measurements made by the San Francisco State University Creep Project and recently expanded GPS station networks provide the primary data on surface creep, which the authors used to estimate the average depth of creep for each fault segment. Where available, details of past ruptures of individual faults, unearthed in previous paleoseismic studies, allowed the authors to calculate recurrence rates and the probable timing and size of future earthquakes.

According to the study, four faults have accumulated sufficient strain to produce a major earthquake. Three creeping faults have large locked areas (less than 1 mm or .04 inches of creep per year) that have not ruptured in a major earthquake of at least magnitude 6.7 since the reporting of earthquakes by local inhabitants: Rodgers Creek, northern Calaveras and southern Green Valley. The southern Hayward fault, which produced a magnitude 6.8 earthquake in 1868, is now approaching its mean recurrence time based on paleoseismic studies.

The authors also estimate three faults appear to be nearing or have exceeded their mean recurrence time and have accumulated sufficient strain to produce large earthquakes: the Hayward (M 6.8), Rodgers Creek (M 7.1) and Green Valley (M 7.1).

“The San Andreas Fault and its two other large branches, the Hayward and Northern Calaveras, have been quiet for decades. This study offers a good reminder to prepare today for the next major earthquake,” said Lienkaemper.

The San Andreas Fault was first identified in 1895. It is about 800 miles long and it has been responsible for several major earthquakes in California. In 1906 The San Francisco ruptured causing a 7.8 magnitude quake that killed around 3000 people and injured thousands more. In 1952 12 lives were lost in the Kern County ‘quake and in 1971 there were 65 deaths in the San Fernando earthquake. 1989 saw the Loma Prieta earthquake cause 63 deaths and damage running into billions of dollars.

The Northridge earthquake of 1994 was the first major quake to occur directly under an urban area since the 1933 Long Beach earthquake. The Northridge quake caused the strongest ground movement forces ever recorded in an urban area in North America. Although no deaths resulted directly from the tremblor damage was widespread and the costs of repairing collapsed highways and damaged homes and infrastructure ran into billions of dollars.

October 16th sees the ‘Great California Shake-out‘ event which stages drills and provides information to Californians on how to deal with earthquakes and their aftermath.

You can learn more about earthquake safety and preparedness here and here. 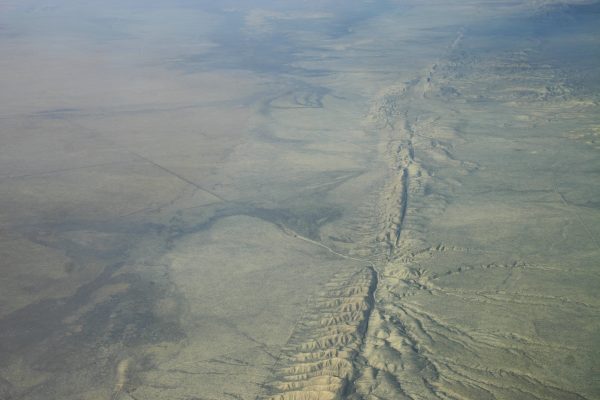