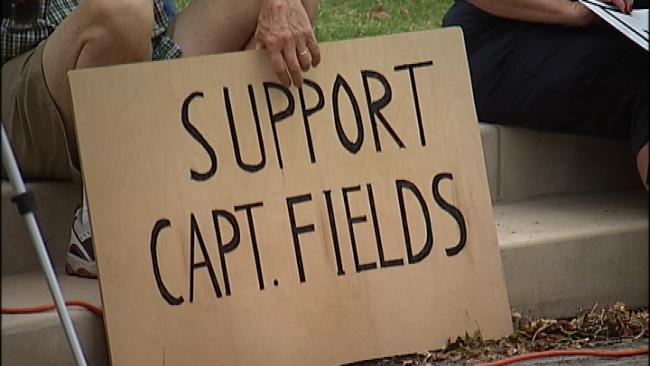 Captain Paul Fields, a Christian, veteran police officer with the city of Tulsa, was punished after refusing to attend a mosque that has alleged ties to the Muslim Brotherhood. He also said that they practiced true Islamic dogma. Furthermore, the captain had the stones not to order any of his officers to attend the mosque either.

Fields was told to participate in something that he referred to as an “Islamic proselytizing event,” which he refused based on his Christian convictions.

The Muslim event was characterized as the mosque’s Law Enforcement Appreciation Day, but it allegedly had nothing to do with appreciation of police officers. According to Fields’ attorneys, Law Enforcement Appreciation Day involved the captain and his officers taking a tour of the mosque, attending a meeting with the mosque’s leadership, attending the Muslim’s weekly prayer service, acquainting the police officers with Islamic religious reading material, and lectures on Islamic beliefs.

The event, which was scheduled for Friday, March 4, 2011, which the Islamic leaders said was a “holy day,” was also going to familiarize the cops with a white-washed version of Mohammad’s life as well as key elements of the Muslim religion and prayers. Originally, the police officers were asked to attend voluntarily, but the majority of officers refused the invitation. At that point the police were mandated to show up at the mosque.

Fields and his legal team possess evidence that the same Siraj Wahhaj told Muslims in New Jersey in 1992, that he wished Muslims were cleverer politically so they could take over the United States and replace its Representative-Republic government with a caliphate and Shariah law.

Fields was subsequently punished for his refusal.

According to the Thomas More Law Center, for his refusal, Fields was “stripped of his command, transferred to another division where he was subsequently assigned to the graveyard shift, and subjected to an Internal Affairs (IA) investigation.”

Fields argues that Defendants violated his right to the free exercise of religion because the Attendance Order required him to order his subordinates to attend the Islamic Society event and/or to attend the event himself, he refused to comply with it, and he was punished as a result. The district court granted summary judgment for Defendants on the ground that no reasonable jury could find that the Attendance Order required Fields personally to attend the event. We agree. To establish a free-exercise claim, Fields must show that the government has placed a burden on the exercise of his religious beliefs or practices.

The obvious question then is if he wasn’t forced to attend the mosque, then why the punishment? If there was punishment because he would not be forced to associate, how can a court determine that his freedom of association was not interfered with?

And what would you call forcing a Christian to attend a Muslim mosque? That’s quite a heavy burden there Tenth Circuit Court! Furthermore, what in the world is a federal court doing involving itself in a local matter? Their ruling it null and void and they have no status via the First Amendment (since Congress can make no law regarding the free exercise of religion). I say that Fields and his attorneys point this out, instead of relying on “precident” rather than constitutional law, and then sue the police department locally with a jury on hand…. one not made up of Muslims, but Christians (who would be Fields’ peers).

The Thomas More Law Center then cited portions of a deposition of Police Major Julie Harris, Fields’ immediate supervisor, in his favor:

The Thomas More Law Center is aiming to take the case to the Supreme Court, but I have to ask, why? This is a local matter. What business does the Supreme Court or the Tenth Circuit Court of Appeals have in ruling on this issue? Both are federal courts. The federal Constitution doesn’t allow for the Federal Congress to make any law regarding this, so it isn’t their purview to rule on it. It is much lower, like the courts in Tulsa.

It’s clear that Tulsa police officers do not believe their mayor supports them, and in light of Oklahoma capitulating (and yes, that is what it is) to the federal government’s opposition to their anti-sharia law, I would say that Governor Mary Fallin is on the fed’s side too.

Consider that Oklahoma is the recent state of an Islamic jihadist beheading of an American, which the politically correct want to call “workplace violence.” Also, consider that the mosque that the jihadist attended was praised by the Muslim-in-chief, Hussein Obama.

Also consider, what if a Muslim police officer was forced to attend a Christian service? Would that have been a problem, or would we have seen the government coddle the Mohammedan?

It’s time the people of Tulsa stood behind Captain Fields and put the pressure on local judges to rule in favor of the law and Captain Fields rather than what is politically correct, and not force this to the Supreme Court, which is not allowed to rule on local matters, but only on federal matters. Furthermore, the states should be taking the advice of Publius Huldah and standing against Islam by implementing bans against its practice in their state.