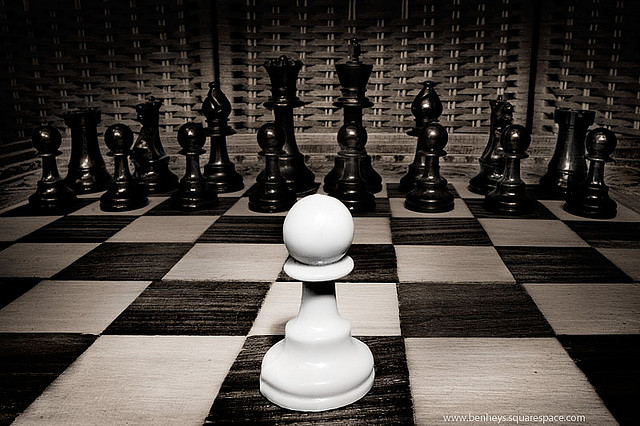 Give me a handful of people who are “too stupid” to know that they can’t win, and I believe that together we can change the world.

This morning I struggle to find the words that need to be said.

America has a problem that has little to do with Ebola, open borders, or the global chess match that might be leading to World War III. These are simply the latest symptoms of a growing disease.

America has lost its heart.

America has lost its direction.

America has lost its fighting spirit.

Most of us are already dead. We just don’t know it or care to admit it.

There is a real danger in doing what I do. The alternative media fails us in some ways and it doesn’t often get discussed. In the quest for finding the truth, sometimes we are victims of our own success and we drag others down with us.

Rather than empowering people by making them angry enough to act, which is the goal, sometimes we simply give them more excuses to give up. People get overloaded and simply do not know where to start. So they don’t start. They just wither away into anonymity.

There is a growing sentiment among Patriotic Americans that we can not win. The enemy is too powerful… There are too many of them and not enough of us… We can’t fight an enemy that we can’t even see…

Please realize that I read more “doom and gloom” articles than most. As fate would have it, this is my job. I read this stuff 365 days a year and it does effect me. I can’t always see solutions. Sometimes I only see the negativity. Here is a perfect example…

Infowars is currently trying to organize a national strike of workers, across all industries, in order that we might put leverage on the Obama administration to do something about banning flights to and from Ebola infected nations.

Kudos to them. Something needs to be done. Right?

My problem is that I don’t think it will work. I think about the failures that came before and I think about the mentality of my fellow Americans and I tend to think that this is just one more project that won’t go anywhere.

I have a bad attitude.

It’s not like I have been offering any solutions from my end. But even though I have no solutions I will be one of the first to tell someone that, “This will never work.”

I don’t think I am entirely alone in that thinking and that is what I want to talk about this morning. When you start thinking like that, you have to learn to snap yourself out of it.

America has a socialist problem. A large percentage of Americans are already slaves of the system. They don’t want it to change. They don’t see how they could possibly live without the government holding their precious little hands from “cradle to grave.” There are more of these people than we sometimes think. They don’t tend to be as vocal as someone like myself. Their life revolves around the prime time TV shows that they never miss and waiting to get that government check each month.

These people are worse than common slaves.

I am an American.

And I vaguely remember what it means to be an American.

See that chip on my shoulder?

It has been knocked off more times than you will ever know. I keep picking it up and putting it back there.

I am not stupid. I realize that a snowball in hell might have a better chance than Liberty in America. I see the same broadcasts and read the same news stories as the rest of you.

The difference between people like us and everyone else is fairly simple.

We simply refuse to quit. We refuse to go silently into the night. We will not be accomplices to our own slavery. We still think we can win so long as we put forth enough effort.

As sure as you live and breathe you must remember to keep living while you are still breathing.

There are no excuses for joining the brain dead masses.

So what if the odds are against us?

Your job is to fight until your final breath and leave this world kicking and screaming so that others might see what it is truly like to be an American.

We are fearless in the shadow of our foes.

We stand for Freedom.

We do not bow to tyrants.

Americans have forgotten what it takes to win. This morning I just needed to rant a little and reach out to my friends. I don’t hold the keys to victory. I have no secret game plan to save us all. I wish I could say that I did.

What I do know is that if we quit we will definitely lose.

The alternative is to keep trying and possibly lose anyway. The odds are not in our favor. But we will live and die as free men who dared to speak the truth and oppose tyranny.

I am not Thomas Paine. I wish I were. I wish I had the talent and the fire to infect so many people and force change. But Dean Garrison is just a guy with very little talent who keeps screaming and hoping that a few people might wake up and listen. If I can wake up a few people then maybe that is the best I can do, but if we all touched the lives of just a few there would be no stopping us.

I’d rather die trying than quit. Anyone who gives up is just part of the problem.

I have to remind myself of that often.

Who is still with me?