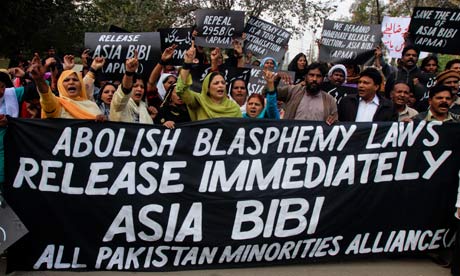 Classify this under “one more reason that Islam can not peacefully co-exist with the West.”

Asia Bibi, also known as Aasiya Noreen, is a Christian fruit picker from Pakistan. She has been imprisoned for over 5 years (June 2009) awaiting for the appeals process to play out in Pakistan. She was originally imprisoned after being accused of blashpemy. The incident of her drinking from a well reserved for Muslims was simply the straw that broke the camel’s back.

Pamela Geller reported on Bibi back in January:

Bibi is awaiting the conclusion of an appeals process after being incarcerated for four and a half years without trial.

Working as a farmhand in June 2009, she was asked to fetch water for some of her co-workers. She complied, but some of her Muslim colleagues refused to drink the water as they considered Christians to be “unclean.”

CBCP News said arguments followed (there was already a running feud between Bibi and a neighbor over property damage), and witnesses maintain that Bibi verbally abused the two women, their religion, and the prophet Muhammad.

A few days later, complaints were made to a cleric about these alleged derogatory comments, resulting in a mob coming to her house and beating her and members of her family.

Bibi was rescued by the police but, under pressure from the crowd, they charged her under Section 295 C of the Pakistan Penal Code, the country’s notorious anti-blasphemy law.

Though many are reporting that she has been imprisoned for drinking the water, that is technically not true. Officially the charge is blasphemy and the water-drinking incident was simply the catalyst.

Now, five years later, Bibi finally has her answer, though I am sure that she was hoping for better news. A high court in Lahore has upheld the decision as reported by Sharia Unveiled, via Breitbart:

A Christian woman who was given the death penalty last year for drinking water from a well reserved for Muslims in Pakistan has had her appeal against the sentence rejected by the Lahore high court.

At the time of her conviction, Noreen said: “I have been sentenced to death because I was thirsty. I’m a prisoner because I used the same cup as those Muslim women, because water served by a Christian woman was regarded as unclean by my stupid fellow fruit pickers”.

None of the original witnesses were present in court to testify, but a Muslim “prayer leader” (Imam) who claimed Noreen, an unrepentant Christian, had confessed the crime to him, did. When the Lahore court delivered its verdict to maintain the death penalty in this case, Noreen and her defence team reacted with shock. Her lawyer promised to keep fighting: “I was expecting the opposite decision. We will file an appeal to the Supreme Court of Pakistan in a few days”.

Rand Paul has stated that aid to Pakistan should cease if this woman is not released. Oliver Lane reports:

If the case is lodged at the Supreme court in Islamabad, the debate over Noreen’s life, which has already lasted five years, could drag out for many more. It has already sparked significant attention, both at home in Pakistan and abroad. U.S. Kentucky Senator and Republic Presidential hopeful Rand Paul has said if Noreen wasn’t released from death row, foreign aid to the country should cease. Lamenting the case, Paul said: “According to her co-workers, she insulted the Prophet. In our country, we refer to such quibbling as gossip. In Pakistan, if you are a Christian, it can land you on death row”.

So do you really think that devout Muslims really belong in a society that still cherishes free speech?

What are you going to do when your grandchild gets this treatment for drinking from a Muslim-only fountain here in America?

Or, by simply voicing a dissenting opinion about Islam?

Don’t think it can happen?