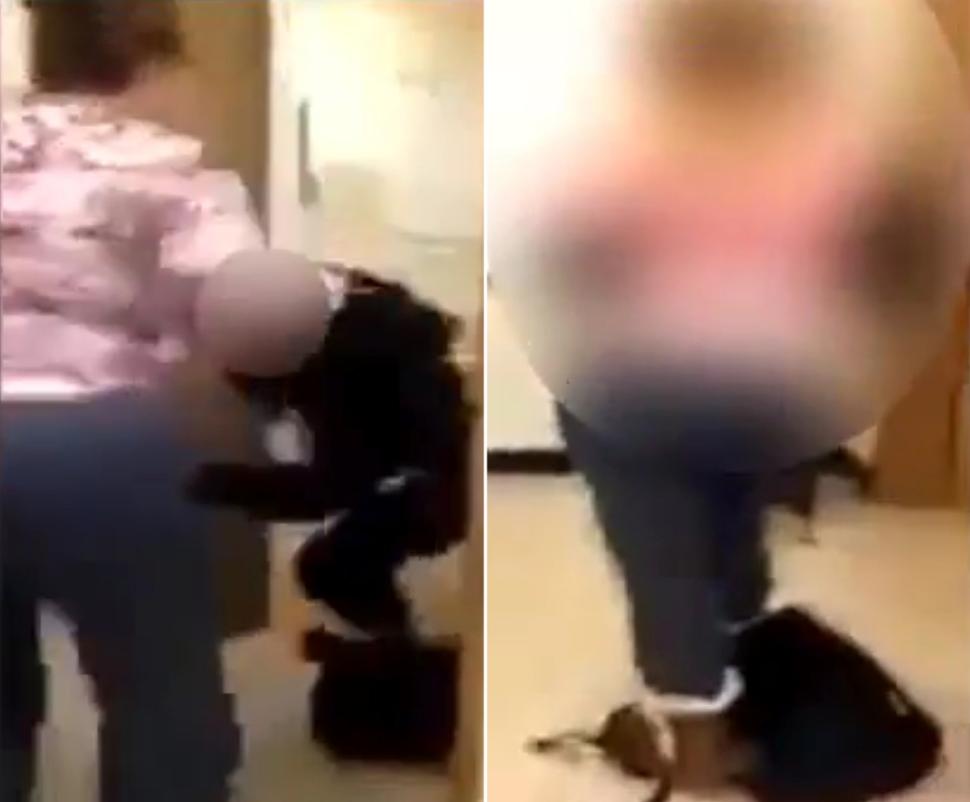 You ever have that nightmare that you’re a teenager and you find yourself at school naked?

Remember how relieved you felt to wake up and find out it was just a nightmare?

Rue told KATU News that she thought she was having a panic attack as the teacher was confronting another student on an unrelated matter. Rue got up to leave the classroom and remove herself from the stressful situation and the teacher began grabbing her aggressively to keep her in the room.

The teacher yanked Rue so hard, she pulled her to her knees and ripped her sweatshirt off, leaving her exposed down to her red bra in front of all of her shocked classmates.

On the video above, you can hear the other students gasping and Rue can be heard whimpering pitifully for them to please turn around and not look at her.

“She doesn’t even have any right to put her hands on me,” Rue told KPTV-TV while describing how her teacher, Carrie McCann, put her in a choke hold and dragged her back into the classroom.

“I never cried like that in my life,” Rue later told KGW-TV. “I could hear the embarrassment, too, in my crying.”

Yeah. You can hear it. Watch the video. Sounds like utter humiliation.

Rue wasn’t doing anything wrong but trying to remove herself from a situation that was sending her into a panic attack. If you have ever had a panic attack, you know this is the right thing to do. What kind of school is this that the teacher has the right to grab a student so aggressively that she rips her student’s shirt off?

The teacher Carrie McCann has been put on paid-administrative leave in the meantime while the school district “investigates,” so she not only gets to treat a student that way, she gets a paid vacation for doing so.

Investigates what? I’m not really sure, considering the video pretty much says it all. That lady got worked up confronting another student, then turned her aggression on a different student for no reason and took it to a place it shouldn’t have gone.

That teacher was supposed to be the adult here. Obviously she needs to grow the hell up, behave like an adult and get a new line of work, because she sucks at this one.

Oh, and apparently the Salem Police Department reviewed the footage briefly and found no crime had been committed…so if you are a teacher, you can grab a student just because the student is leaving the room, not just grab but aggressively grab that student so hard you pull her to the floor, and then rip the student’s shirt off and that’s…just fine?

That’s not, you know, assault or anything?

Think about it. If you are a parent in this country and you did that same exact thing to your child in a public place like that, you would be arrested and have your child removed by family services in a heartbeat.

Can you imagine being a teen girl who already gets so upset that you are prone to panic attacks in the first place, then when you try to deescalate the situation, your teacher grabs you and yanks on you so violently when you get upset that she throws you to the floor and exposes your bare body in front of your classmates? How do you go back to school and look at your fellow students in the face after that?

What if she was a girl who didn’t wear a bra? What then?

What the hell is going on in America’s schools? Why do students apparently lose all their rights whatsoever — even to their very own bodies — when they set foot on school property?