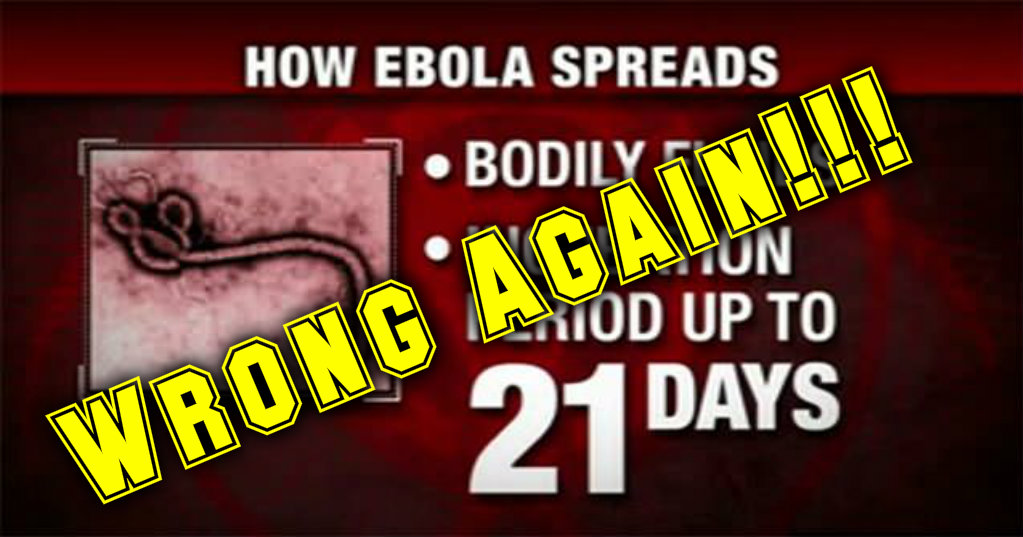 With quarantines and observation periods now expiring for those who may have come in contact with Thomas Duncan, I think it is important to highlight the fact that some important new information is emerging. This new information might suggest that a 21-day quarantine is not sufficient to protect the public.

Last week I reported on a new World Health Organization report that would seem to contradict the popular belief that Ebola can only incubate for a maximum of 21 days. The WHO study found that in 5% of cases the incubation period exceeded the 21-day window. According to Mike Adams:

A jaw-dropping report released by the World Health Organization on October 14, 2014 reveals that 1 in 20 Ebola infections has an incubation period longer than the 21 days which has been repeatedly claimed by the U.S. Centers for Disease Control.

This may be the single most important — and blatantly honest — research report released by any official body since the beginning of the Ebola outbreak. The WHO’s “Ebola situation assessment” report, found here, explains that only 95% of Ebola infections experience incubation within the widely-reported 21-day period. Here’s the actual language from the report:

Since that time, information on another study has emerged. In support of the World Health Organization findings, Dr. Richard Haas of Drexel University has a similar contention. As reported by The Daily Mail…

In his new research paper titled ‘On the Quarantine Period for Ebola Virus‘ published in PLOS Currents: Outbreaks on Tuesday, Dr Charles Haas, of Drexel University, argues that some patients may remain contagious longer than 21 days, thus raising the risk of an epidemic.

According to Haas, a professor of environmental engineering specializing in microbiological risk assessment, the 21-day isolation period that has been recommended by the US Centers for Disease Control and Prevention and the World Health Organization is based on potentially flawed data from the 1976 Ebola outbreak in Zaire.

There have been other outbreaks of the deadly illness over the past 38 years, but Haas says that health organizations have failed to revise their recommendations regarding the appropriate length of quarantine based on the more recent, and larger, data sets.

When the researcher plugged into his model figures from the 1995 outbreak in the Congo and from the first nine months of the current epidemic originating in West Africa, he discovered that there is up to a 12 per cent chance that Ebola incubation could last longer than 21 days.

While Haas would not say what the ‘magic number’ of days in quarantine should be, he believes that it is longer than three weeks.

‘Twenty one days may not be sufficiently protective to public health,’ he writes in his paper.

For example, data associated with the Congo outbreak indicates that people possibly exposed to Ebola should remain in isolation for as long as 31 days.

The public needs to be aware of these findings. Quite likely it will take some time for the generally accepted 2-21 day incubation period to be challenged, if it gets challenged at all.

However, if the new findings are scientifically verified then the 21 day quarantine periods are simply not long enough. With only 5% or 12% of Ebola patients going beyond 21 days it may not seem like a large concern to many. But we must remember that Ebola is a death sentence for over half of those who contract it. This means that a quarantine period that is too short may allow just one person, or maybe a handful of people, to be cleared while still carrying the virus. Just one person can turn into multiple cases that can then grow exponentially.

It seems that there are many who are rolling the dice, in regards to our safety, and hoping they are right. They are playing a dangerous game of chance with public health and this is not acceptable.

When these new studies emerge, from seemingly credible sources I must add, there needs to be an immediate investigation into the new facts and, if needed, policies should be revisited.

That does not appear to be happening.

I expect these 21-day quarantines to be standard for quite some time.

But there is evidence, from multiple credible sources, that 21 days is simply not long enough.