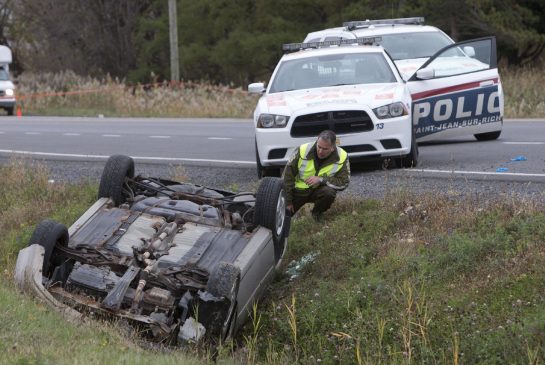 A jihadist in Canada is dead from gunshot wounds after he struck two members of the Canadian Forces with his car in an incident an MP cited in the Commons as a “possible terror attack.”

The story began at 11 30 am in the parking lot of a small busy commercial center of Saint-Jean-sur-Richelieu, located on Boulevard North Seminary.

Two soldiers, one in uniform and one in civilian clothes, were walking in the parking lot when a vehicle, out of nowhere, drove over them.

The first survey evidence tends to suggest that this was a deliberate act on the part of the driver, who fled the scene after the impact.

The two soldiers were injured in the crash, one very seriously and where paramedics attempted resuscitation procedures.

Police officers called to the scene quickly located the vehicle and fugitive chased. The police chase took place over several kilometers and had a tragic ending near the intersection of Boulevard and Seminary Street Carillon.

According to our information, the police rushed to the car to rescue the driver. But he had managed to get out of the carcass of the vehicle through a window and would then rushed to the agents brandishing a long knife.

Two officers then opened fire in his direction. “At first, I thought it was a film shoot, it was unreal,” said another woman who saw the dramatic action unfold before his eyes.

A couple of weeks ago, an Army intelligence bulletin warned U.S. military personnel to be vigilant after Islamic State militants called on American Muslims to scour social media for addresses of their family members -– and to “show up [at their homes] and slaughter them.” The advisory warned military personnel and their families about the Islamic State, or ISIS, calling on supporters to target their homes.

The author of this alleged attack, aged 24, was later killed by police after a police chase during which he called 911 to say he was “in the name of Allah,” according to our sources. According to sources from QMI Agency, he called Martin Rouleau Couture.Asked by one of his own MPs at question period in Parliament whether he was a terrorist attack, Prime Minister Stephen Harper said the first reports on the matter are “very troubling.”“We are closely monitoring the situation and make available all the resources of the federal government,” said the Prime Minister in the House of Commons.

The soldiers were hit in a parking lot of a commercial plaza at around 11:30 a.m. ET. Both were injured, one critically.

The incident was raised in the House of Commons this afternoon by Conservative MP Randy Hoback, who questioned Prime Minister Stephen Harper about “unconfirmed reports of a possible terror attack” targeting members of the Canadian Forces.

Harper would only say he is “aware of these reports” and that they are troubling. No idea if it is terror motivated at this point – no perp description yet. More at La Presse

A man in his 30s was shot dead by police in St-Jean-sur-Richelieu Monday morning after three pedestrians were hit by a car. Police say the man fled the scene of the accident when police arrived, was involved in a chase, lost control of his car and flipped it, got out of the car and ran at police with a knife.

It began just before noon, when three people were hit in the parking lot of a strip mall on Séminaire Blvd. and the suspect sped off. The regional police followed him and he lost control at the intersection of du Séminaire and de Carillon St.

When police caught up, the suspect climbed out of his car, a knife in his hand, and ran at them. Police opened fire and he died.

Of the three pedestrians hit, two were seriously hurt.