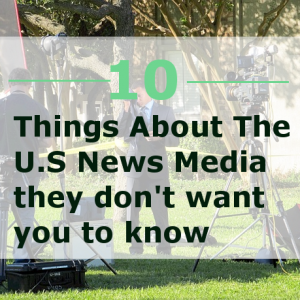 Do you trust the news media?  Do you believe that the information that they are giving you is true and accurate?  If you answered yes to either of those questions, that places you in a steadily shrinking minority.  Yes, on average Americans watch approximately 153 hours of television a month, but for their news they are increasingly turning to alternative sources of information such as this website.  Big news channels such as CNN, MSNBC and Fox News are losing hordes of viewers, and they are desperately searching for answers.  Things have gotten so bad at CNN that they have been forced to lay off hundreds of workers.  The mainstream media is slowly dying, but they will never admit it.  They are still convinced that they can find some way to turn this around and regain the trust of the American people.  But it simply is not going to happen.  The following are 10 things about the U.S. news media that they do not want you to know…

#1 The level of trust in the U.S. news media is at an all-time low.

According to a Gallup survey that was conducted last month, only 40 percent of all Americans have a “great deal/fair amount” of confidence in the mass media.  That ties the lowest level that Gallup has ever recorded.

#2 The news media is far more liberal than the American people.

And it is a fact that “journalists” are far more likely to give money to Democrats than to Republicans.  The following comes from an MSNBC report…

MSNBC.com identified 143 journalists who made political contributions from 2004 through the start of the 2008 campaign, according to the public records of the Federal Election Commission. Most of the newsroom checkbooks leaned to the left: 125 journalists gave to Democrats and liberal causes. Only 16 gave to Republicans. Two gave to both parties.

#3 Fox News is not nearly as “conservative” as you think that it is.

Fox News may be constantly promoting a “Republican agenda”, but that does not mean that it is conservative.  This is especially true when it comes to social issues.  Some of their anchors are extremely socially liberal, one of the top executives at Fox News is a big Hillary Clinton supporter, and 21st Century Fox/News Corp. has given the Clintons more than 3 million dollars since 1992.

#4 MSNBC is in a death spiral.

After years of lying to the American people, the credibility of MSNBC is absolutely shot.  Pretty much all MSNBC does is endlessly spew establishment propaganda.  One study found that MSNBC only engages in 15 percent “factual reporting” and the other 85 percent is “commentary/opinion”.

NBC News and sister cable network MSNBC rank at the bottom of media outlets Americans trust most for news, with Fox News leading the way, according to a new poll from the Democratic firm Public Policy Polling.

In its fifth trust poll, 35 percent said they trusted Fox news more than any other outlet, followed by PBS at 14 percent, ABC at 11 percent, CNN at 10 percent, CBS at 9 percent, 6 percent for MSNBC and Comedy Central, and just 3 percent for NBC.

#5 Americans are increasingly turning to Facebook and other Internet sources for their news.

At least that is what one recent survey discovered.  It found that an astounding 48 percent of Americans got news about government and politics from Facebook within the past week.  The numbers for CNN and Fox News were just 44 percent and 39 percent respectively.

#6 Over the past year or so the big three cable news networks have lost an unprecedented number of viewers.

According to a Pew Research study, the number of prime time viewers for all three networks combined declined by 11 percent in 2013…

In 2013, the cable news audience, by nearly all measures, declined. The combined median prime-time viewership of the three major news channels—CNN, Fox News and MSNBC—dropped 11% to about 3 million, the smallest it has been since 2007. The Nielsen Media Research data show that the biggest decline came at MSNBC, which lost nearly a quarter (24%) of its prime-time audience. CNN, under new management, ended its fourth year in third place, with a 13% decline in prime time. Fox, while down 6%, still drew more viewers (1.75 million) than its two competitors combined (619,500 at MSNBC and 543,000 at CNN).

#7 The big news networks have a love affair with the Obama administration.

Yes, there are reporters that get annoyed by the petty press rules that Obama makes them follow and by their lack of access to the president, but overall there is a tremendously incestuous relationship between the Obama administration and the mainstream news media.

And needless to say, Barack Obama does not care for the alternative media much at all.  The following is an excerpt from a WND article…

NBC News Political Director Chuck Todd says President Obama was making it “clear” at the White House Correspondents’ Dinner over the weekend how he feels about the rise of Internet news sites like Politico, Buzzfeed and … well, WND.

“It did seem … I thought his pot shots, joke-wise, and then the serious stuff about the Internet, the rise of the Internet media and social media and all that stuff – he hates it, OK? He hates this part of the media,” Todd said. “He really thinks that the, sort of, the buzzification – this isn’t just about Buzzfeed or Politico and all this stuff – he thinks that sort of coverage of political media has hurt political discourse. He hates it. And I think he was just trying to make that clear last night.”

#8 Newspaper ad revenues are about a third of what they were back in the year 2000.

Yes, you read that correctly.  As Americans have discarded the print versions of their newspapers, newspaper ad revenues have experienced a decline that is absolutely unprecedented…

Once upon a time, news magazines such as Time, Newsweek and U.S. News & World Report were must reads.

But those days are long gone.

Ad revenues are way down across the entire industry, and any magazine that can keep their yearly losses to the single digits is applauded for it…

For a third year in a row, news magazines faced a difficult print advertising environment. Combined ad pages (considered a better measure than ad revenue) for the five magazines studied in this report were down 13% in 2013, following a decline of 12.5% in 2012, and about three times the rate of decline in 2011, according to the Publishers Information Bureau. Again, hardest hit was The Week, which suffered a 20% drop in ad pages. The Atlantic fell 17%, The Economist 16%, and Time about 11%, while The New Yorker managed to keep its ad pages losses in single digits (7%).

#10 Even though the mainstream media is dying, they still have an overwhelmingly dominant position.

What would you say if I told you that there are just six enormous media conglomerates that combine to produce about 90 percent of all the media that Americans consume?

If you do not believe this, please see my previous article entitled “Who Owns The Media? The 6 Monolithic Corporations That Control Almost Everything We Watch, Hear And Read“?

This is why “the news” seems to be so similar no matter what channel you watch.

But we aren’t just talking about control of the news media.  These giant media corporations also own movie studios, newspapers, magazines, publishing houses, video game makers, music labels and even many of our favorite websites.

So we should be thankful that their media monopoly is finally crumbling.

Nobody should have that much power over what the American people see, hear and think about.

What is your perspective on all of this?  Please feel free to share your thoughts on the U.S. news media by posting a comment below…