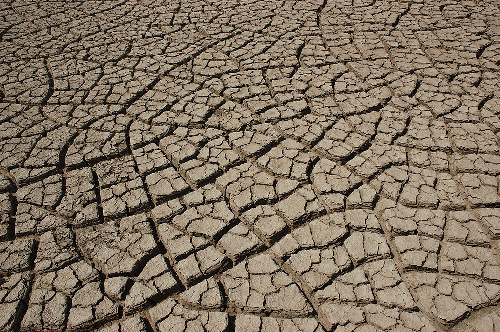 Nestled in the mountains of California, is the infamous tourist destination of Bodie. Once a thriving gold mining town, it is now an empty shell of its former self. As soon as the gold depleted in the early 20th century, the town faced decades of decline that it would never recover from.

By the early 1960′s, the last handful of residents left the town. They leaving behind an eerie scene, filled with crumbling homes and businesses amidst a desolate landscape. However, gold isn’t essential to living. If the Western drought continues on its current course, then we have dozens of ghost towns to look forward to in the near future.

So far the drought in California has been relentless. Where I live in the Bay Area, we’ve had our first rain of the year today, if you could call it that. More like a fine mist. Normally we’ve gotten at least one rainy day by this time of year, but it’s looking like this winter is going to be just as bad as last year.

The people living in the rural parts of the central valley are getting hit the hardest. A total of 14 communities throughout the state are on the edge of water depletion. For now they’ve been able to keep the situation under control by allocating water from neighboring communities, but how much longer can they continue to do so?

Last week it was reported that certain regions of California have about 2 months before they run out of water. If we don’t get rain soon, it’s possible that some people may have to leave their homes. Furthermore, the timing of this rain is going to be crucial.

As reported by Bloomberg News, California will continue to suffer chronic drought without substantial mountain snowfall this winter; snowfall that melts in spring replenishes the state’s water systems, but there has been a dearth of snowfall in recent years.

“All eyes will be turned to the winter because it is a really critical winter, not just for California but the rest of the West and the lower Great Plains as well,” Mark Svoboda of the National Drought Mitigation Center in Lincoln, Nebraska, told Bloomberg.

If we had 20 inches of rain in April or March, none of it would become snow, and none of it would refill our reservoirs . 90 percent of our water supply comes from snow melt in the Sierras, so that water constitutes not just the bulk of our agricultural usage, but urban use as well.

And that’s where things might start to get scary for California, and the Western United States in general. It’s one thing to have to spend more money on groceries every month because our most abundant agricultural region is drying up. It’s quite another to start water rationing millions of urbanites.

For most people in the city, this is a faraway problem lurking in the back of their minds. It hasn’t hit home yet. The worst drought in recorded history means they’ll have to let their lawn dry up, and pay a higher water bill. It doesn’t mean that they’ll have to start taking their showers with bottled water. It doesn’t mean that they’ll face bankruptcy if their crops die. Most of them have no idea how bad it is. Someday they’ll be blindsided when their cities begin to shutoff their water throughout the day.

Not that the city and state governments know what they’re doing. When it comes to allocating the states resources to local communities, they’re using outdated data from the early 20th century. That means that they’re giving the rights to more water than actually exists in our reservoirs.

With conditions as they currently are, many of the streams and waterways that provide water throughout California are running dry. And this is occurring even as many areas draw less water than they are technically allowed to under the law, meaning that, if every area was exercising its full water rights, California’s water crisis could snowball into a complete infrastructure collapse.

According to LAR, the most overused rivers are located primarily in Northern California, and mainly constitute those that flow from the Sierra Nevada mountains down into the Central Valley toward the Sacramento-San Joaquin Delta. In these areas, existing water rights exceed actual water availability by a factor of six or more, according to experts.

Meanwhile, state officials continue to hound residents to cut back on their water usage. It turns out that if they want to find the worst water abusers in their communities, they only need to take a look in the mirror.

Mike Soubirous is a prodigious water user, pumping more than 1 million gallons per year at his lushly landscaped home on a hot, windy Southern California hilltop.

Soubirous also is a member of the Riverside City Council, which in July voted unanimously to impose tough new water conservation rules in this desert city of 317,000.

Yet as California’s drought worsened from 2012 to 2013, Soubirous consumed enough water to supply eight California households — more than any other top water official in the state, records show…

…In addition to Soubirous, two other officials — a Fresno city councilman and a member of Riverside’s utilities board — pumped more than 1 million gallons in a single year during the drought, records show.

Eight other officials used more than 1,100 gallons per day in 2013. That’s triple the state’s average. Among them was Randy Record, chairman of the board of the Metropolitan Water District of Southern California, which recently launched an advertising blitz to persuade 19 million people to save water.

Fortunately, water bills for any state official who sets water policy, is open to the public. So far that law is the only positive thing this state has done to curb the water crisis.

All told, this drought is going to have far reaching effects across the United States. Not only is it going to drive up food prices, but it may force many Californians out of their communities, and perhaps, out of the state.

The rest of the country used to joke about California breaking away from the US and falling into the sea. Now they may be faced with Californian refugees fleeing the state in the near future. I doubt they’ll be laughing then.