A new video uploaded by A3maq News, which reportedly acts as ISIS’ unofficial media arm, shows U.S. weapons that were airdropped into the wrong territory in Syria. Instead of land controlled by the Kurds, the weapons were dropped into ISIS land.

The Daily Beast tried to play this off as the weapons accidentally ‘falling into the hands of ISIS,’ in the second paragraph of its article on this situation, after clearly admitting in the first paragraph that the territory the weapons were dropped into was known to be under ISIS control to begin with:

In a new video, ISIS shows American-made weapons it says were intended for the Kurds but actually were air dropped into territory they control.

At least one bundle of U.S. weapons airdropped in Syria appears to have fallen into the hands of ISIS, a dangerous misfire in the American mission to speed aid to Kurdish forces making their stand in Kobani.

Gee. How did that happen?

Are they really going to claim intelligence failure when, thanks to former NSA contractor Edward Snowden’s leaks, we now know we live in a world where the U.S. government can suck up the communications data of an entire country at once?

Previously released videos from Iraq also purport to show ISIS fighters zooming around in U.S. tanks, humvees and mine-resistant, ambush-protected (MRAP) vehicles. There are even unconfirmed reports according to The Daily Beast that three U.S. fighter jets have been stolen from ISIS-conquered bases.

But, somehow, Americans should continue to trust their government. We should go along with the government as it hands over hundreds of millions of dollars here and there to people we are continuously reassured are the “vetted” moderate Syrian rebels (whatever that means).

How does that work?

Has anyone witnessed any of those transactions go down? Saw the paperwork detailing the supposed vetting process? Saw who cashed those big, fat checks from Uncle Sam?

Or is this all a big, fat steaming pile of bull?

But hey! Sen. John McCain said that he ‘vetted’ the Syrian rebels ‘because he knows them,’ and if you don’t trust them, you’re just making excuses for not taking the proper action to stop ISIS.

John McCain, in one of his rare TV appearances, said on Fox News today that anyone saying they mistrust the Free Syrian Army is just making excuses for not taking action against ISIS.McCain touted that he’s “vetted a number of them because I know them.” It was at that point Fox aired the infamous photo from last year of McCain and a few Syrian rebels, two of which turned out to be suspected kidnappers. This led to Rand Paul taking a shot at McCain and illustrating this as an example of why it’s hard to properly vet Syrian rebels. [emphasis added]

Here’s that snapshot of McCain with the “vetted” rebels, again, two of which are suspected kidnappers: 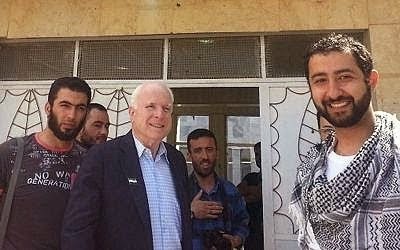 Because that picture really inspires “trust.”

So out of what, five guys, TWO are suspected kidnappers? That’s a 40% fail rate on vetting in a pretty small group size, Senator McCain.

Now think about the total number of rebels we are supposedly vetting and apply that 40% fail rate — and that’s if you even believe this terrorist fairy tale our government has concocted to begin with!

But you can trust these politicians, America. And you can trust our government to know the difference between “terrorists” and “rebels”. That’s why the Department of Defense just “accidentally” airdropped weapons into the wrong hands.

It’s not as if our government didn’t fund ISIS to begin with, and train and arm them or anything.

Syrian rebels who would later join the Islamic State of Iraq and the Levant, or ISIS, were trained in 2012 by U.S. instructors working at a secret base in Jordan, according to informed Jordanian officials.

The officials said dozens of future ISIS members were trained at the time as part of covert aid to the insurgents targeting the regime of Syrian President Bashar al-Assad in Syria. The officials said the training was not meant to be used for any future campaign in Iraq. [emphasis added]