Obama is providing “humanitarian” aid to these savages.

Her own father casts the first stone — the honor code under Islam. Islam first and always above all the sharia — before family, love, humanity.

Sickening: The woman is seen pleading for her life before being stoned to death by men – including her father

Terror: The bearded ISIS militant orders the woman to be ‘content and happy’ that she is about to be stoned to death because, he says, her death has been ordered by God. Her father (left) stands next to the extremist

Daily Mail: Islamic State militants fighting in Syria and Iraq have released a sickening video of a young woman being stoned to death by a group of men – including her own father.

The shocking footage is understood to have been filmed in the city of Hama and shows a bearded cleric ranting at the woman in Arabic and accusing her adultery while she pleads for her life.

The woman turns to her father and begs his forgiveness but he coldly rejects her, saying he would rather please God. He then turns to the men to give the signal for his daughter’s murder to begin.

Minutes later, as the men rain rocks down upon the helpless woman, her father steps forward with a large stone and the video fades to black.

It is believed he had been granted the barbaric ‘honour’ of being allowed end the life of the daughter he felt had betrayed both him and her religion.

Terror: The bearded ISIS militant orders the woman to be ‘content and happy’ that she is about to be stoned to death because, he says, her death has been ordered by Allah. Her father (left) stands next to jihadist

Beirut:  Militants of the Islamic State militant group released a video on Tuesday showing its members stoning a woman, whom they accused of committing adultery, to death.

At the beginning of the five-minute recording, the woman appears in front of her father and an IS fighter, who states that she will be the first woman in the central Syrian province of Hama to be stoned for adultery.

She is seen begging for forgiveness from her father, but he refuses at first. A jihadi then persuades him to forgive her so her soul can ascend to heaven.

The man leads his daughter to a hole dug in the ground, then gathers stones, which are then used by the IS members to pelt the woman with until she dies.

The authenticity of the video could not be independently verified and it was unknown when the stoning occurred.

In July, two Syrian women were executed by stoning in the northern province of Raqqa, the IS’s main stronghold in Syria, on similar charges.

The IS proclaimed an “Islamic caliphate” in the Syrian and Iraqi territories under its control in late June.

UPDATE: Translation thanks to MEMRI:

A video posted on the Internet shows the stoning of a woman accused of adultery in the Hama area in Syria. In the video, an official from the Islamic State is shown administering the proceedings, at the end of which, the woman is led to a hole in the ground, where she is stoned to death by her father and other men present.

Click here to view this clip on MEMRI TV

ISIS Member: “You are the first woman in this area on whom we are implementing the punishment of stoning for adultery. We hope that this will serve as a lesson for other women.” 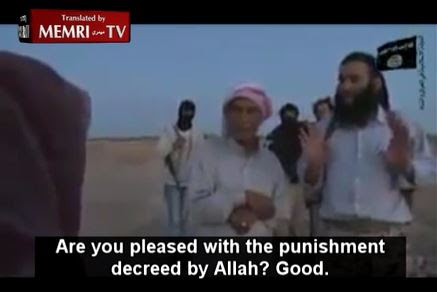 “This punishment is the result of the actions you did of your free will. Nobody forced you to do this. Therefore, you should be satisfied with the ruling decreed by Allah, and submit to Allah. Islam means submission and obedience to Allah, okay? Are you pleased with the punishment decreed by Allah?”

He turns to the father of the woman

“Is there anything you would like to say to your daughter?”

Woman: “Ask him to forgive me.”

“I am not your father anymore.”

ISIS Member: “Okay, you are not her father anymore, but you can still forgive her.”

Father: “There is God in the heavens.”

Father: “You expect me to forgive you for your mistake?!” 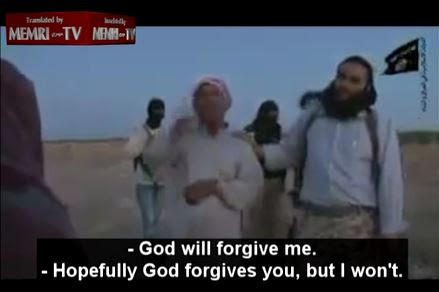 Woman: “God will forgive me.”

Father: “Hopefully God forgives you, but I won’t.”

ISIS Member: “The Lord is more merciful than us all. Allah willing, you will be rewarded for forgiving her. She is going to die. Please, forgive her.”

ISIS Member: “Okay, but forgive her. Tell her you do.”

Father: “Fine, I forgive you.”

ISIS Member: “Dear sister, now that we are on the verge of implementing one of Allah’s punishments, what do you want to say? What advice do you have? Say your last words before you leave this world for the next. Go ahead.”

Woman: “I advise every woman…”

Woman: “I advise every woman to guard her chastity as much as she guards her life.”

Woman: “Enough with that!”

“I advise fathers that when they marry their daughter off, they should examine to what environment they send them.”

ISIS Member: “This is a message to all married men form a married Muslim woman, who was driven to do what she did by the mistake of some men. Don’t leave your women alone beyond the period designated by the shari’a.”

“If you leave your wives alone for a year, two years, or even three years – what will happen with those women? Satan will toy with them as he pleases. Return to Allah, brothers, and take care of your wives.”

ISIS Member: “Tie her up. Put the blanket on her head. Sheik, tie her up.”