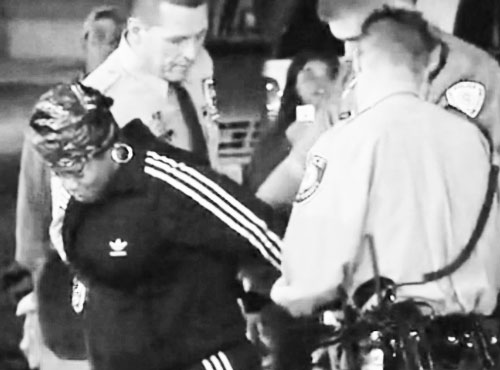 Guess who got arrested Monday night after she refused to get up off the ground out in the middle of the road in front of the Ferguson Police Department?

And not only arrested, but arrested while her breath reportedly reeked of alcohol and she just so happened to be carrying a fully loaded 9mm with extra ammo?

Why none other than Anti-gun Missouri Senator Jamilah Nasheed (D-St. Louis), who has herself sponsored multiple gun control bills.

“Sen. Nasheed, along with another male, entered the street, were told numerous times by not only by the St. Louis County commander, but other officers on scene, that they needed to leave the street or they were subject to arrest,” St. Louis County Police Sgt. Brian Schellman said. “They failed to comply, and they were taken into custody.”

Here she is below chanting in the street in protest of the Michael Brown shooting — which the autopsy has now revealed happened after Brown went for Police Officer Darren Wilson’s gun — prior to her arrest. Police gave the Senator and her companion numerous warnings to get out of the street and back on the sidewalk before they arrested her but she refused to budge.

According to police accounts, Sen. Nasheed reeked of intoxicants, and upon booking and being formally charged with Failure to Obey Lawful Order of Police and Manner of Walking in the Roadway, she refused a breathalyzer. She has since commented that she was not drunk and that the whole thing was a “symbolic arrest”:

So the Senator’s message to Ferguson protesters on how to protest “peacefully” involves what police describe as “intoxicants,” carrying a loaded gun, and kneeling in front of traffic in the middle of a busy street and refusing to move?

Oh, and then there’s this:

The officer told 97.1 FM News Talk that, “It was readily apparent that [Nasheed] was intoxicated,” and “It was decided that she was going to be charged with DUW… It was a decision on behalf of the prosecutor’s office to not pursue that.”

How nice of the prosecutor not to pursue that. Well, the senator did say it was a “symbolic arrest.”

Looking into her anti-Second Amendment dealings, Sen. Nasheed has co-sponsored several bills, including a de facto gun owner registry she added as an amendment to Senate Bill 613 that was later removed.

She sponsored similar bills in SB 556 and SB 565, both of which would require firearm owners to report the loss of a firearm to a local law enforcement agency within 24 hours at the risk of being fined $1,000. Boom: de facto registry. If the gun owner happens to possess a concealed carry permit and fail to immediately pay the $1000 fine, the permit would be suspended for a whole year. Oh, and any subsequent failures in this regard would risk the gun owner being charged with a Class A misdemeanor.

This woman also pushed for a bill that would require parents or guardians who own firearms to notify their child’s school in writing that they own said firearms within 30 calendar days of enrollment.

The issue here isn’t even whether or not Senator Nasheed made an ass out of herself in the street on purpose for political reasons or if she was (or wasn’t) visibly intoxicated while carrying a loaded gun.

The issue here is that this woman has used her political office to sponsor multiple gun control bills which would negatively impact the lives of every lawful gun owner in the state of Missouri, while she herself is a gun owner and thus must realize her actions are in direct conflict with the Second Amendment.

Clearly the senator isn’t serving the will of the people — including herself as a gun owner — but the will of her party.

President Obama, Vice President Biden and Attorney General Holder would be so proud.