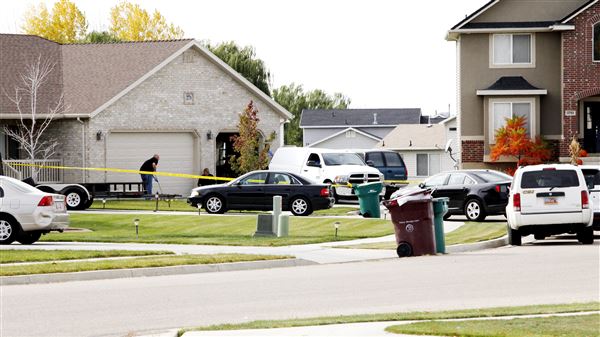 — Theme to the imaginary TV show “The Mercy Killers,” as presented in a 1978 Saturday Night Live sketch.

A still-unidentified 35-year-old man from Roy, Utah called a suicide prevention hotline at 4:00 a.m. Tuesday morning (October 21). A SWAT team showed up and, according to Roy PD spokesman Matt Gwynn, “negotiated” with the “subject” for more than six hours.

“At some point those negotiations failed and unfortunately the SWAT team was involved in a shooting, and the subject is now deceased,” Gwynn told a reporter for the Ogden Standard-Examiner, taking refuge in the familiar, officially-prescribed impersonal language used to describe police shootings.

Eyewitness Ron Smith told the Standard-Examiner that he heard “one shot, and then a pause, and then four or five shots after that, that were very rapid.”

Although he provided no further details from the incident — not even the name of the victim — Gwynn quickly asserted the reasonableness of the lethal actions by his fellow officers.

“officers are authorized to stop a threat whenever their life is threatened, or the life of another is threatened,” recited Gwynn. “And at that point if the officer feels he is justified, he may act to stop that threat.” Note, once again, how Gwynn scrupulously avoids the use of descriptive language acknowledging that one of his comrades just killed another human being.

Police are trained and encouraged to perceive the public at large to be a “threat” to “officer safety”; one illustration of this is the fact that as Gwynn spoke to the reporter in an otherwise placid neighborhood he was wearing body armor beneath his polo shirt. In a situation involving a potentially suicidal person, the formula regurgitated by Detective Gwynn would justify pre-emptive execution of the “subject,” who is, after all, threatening to kill someone.

“We encourage those having suicidal thoughts or tendencies to contact a physician or expert that can talk them through it,” advised Gwynn. “In this particular case he attempted to do that — it’s unfortunate and sad that it failed.”

Gwynn appeared utterly insensible of how his advice would appear to anybody paying attention: Suicidally depressed people who call for help will invariably attract the attention of state functionaries endowed with the power of discretionary killing.

Courtesy of The Lew Rockwell Blog.