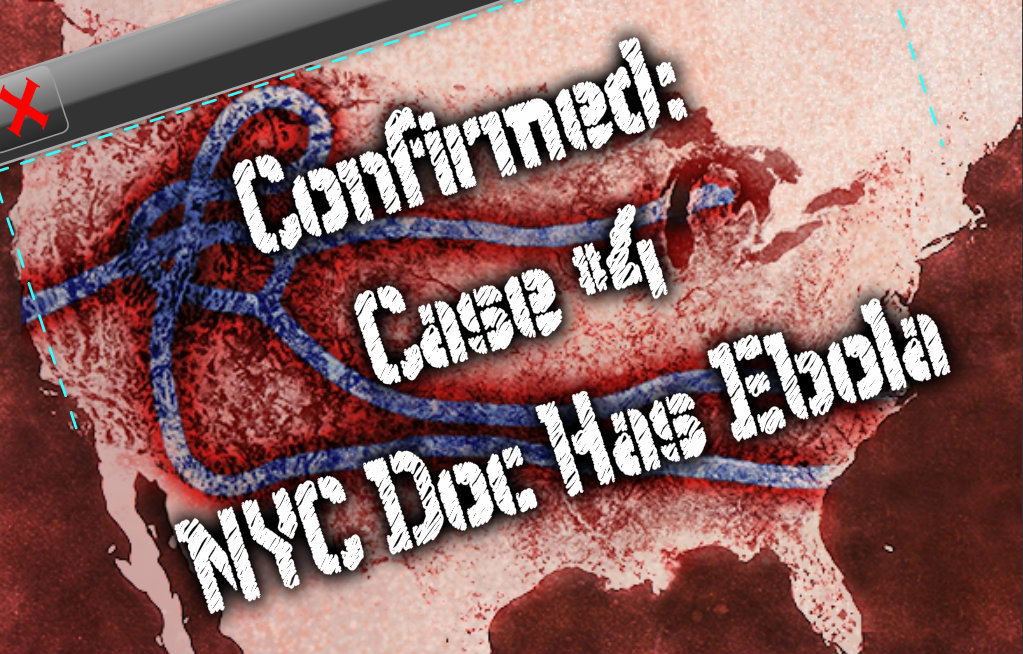 A doctor who arrived in New York City from the Ebola stricken country of Guinea has tested positive for the Ebola virus, making him the fourth confirmed case in the United States.

The doctor had a 103 degree fever when he checked into a hospital.

New York officials are scrambling to identify potentially hundreds of individuals he may have come into contact with. According to The New York Times, the doctor took a subway train from New York to Brooklyn, where he joined others at a bowling alley for the evening. He then took a taxi back to his home in New York.

The doctor, Craig Spencer, was rushed to Bellevue Hospital Center on Thursday and placed in isolation while health care workers spread out across the city to trace anyone he might have come into contact with in recent days. A further test will be conducted by the federal Centers for Disease Control and Prevention to confirm the initial test.

Even as the authorities worked to confirm that Mr. Spencer was infected with Ebola, it emerged that he traveled from Manhattan to Brooklyn on the subway on Wednesday night, when he went to a bowling alley, and then took a taxi home.

The next morning, he reported having a temperature of 103 degrees, raising questions about his health while he was out in public.

For weeks the Obama administration has been under pressure to restrict flights to the United States if they or their passengers originate in Ebola-stricken countries. The Centers for Disease control has said that such a ban would actually increase the chances that Ebola would make its way into the country.

While they think a travel ban would secure the U.S. border from Ebola and shrink the potential spheres of contact, CDC director Tom Frieden says instituting a flight ban would forfeit what little control we currently have over the virus.

We now have a confirmed case of exactly the scenario that a travel ban would have prevented.

Though the CDC said yesterday that they would begin quarnatining travelers from West Africa for 21 days once they entered the U.S., they are once again a day late.

But this time it may be much worse than anyone at the CDC would care to admit. Unlike Dallas the city of New York has a massive public transportation system and the Ebola-stricken doctor just happened to travel on it from his home in Harlem all the way to Brooklyn. Next he arrived at a bowling alley where, as most Americans know, there would likely have been some sharing of bowling balls, food, and high fives.

Less than 24 hours later the doctor was showing a fever of 103 degrees consistent with Ebola symptoms.

This means that for a full day before he checked into the hospital there were hundreds of other people that could have been exposed.

Last week President Obama issued a video message in which he said that you cannot catch Ebola just by riding on a bus:

“Ebola is actually a difficult disease to catch. It’s not transmitted through the air like the flu.”

“You cannot get it from just riding on a plane or a bus.”

How about a subway train, Mr. President?

The CDC recently confirmed that, while the Ebola virus may not be transmitted as easily through the air as a common flu, infectious Ebola material can move through the air in the form of droplets.

According to MIT research the contagion blast radius of Ebola droplets in the air resulting from something like a sneeze is several meters. In environments with ventilation systems like those found in most U.S. venues and transit systems, it could be as high as 100 meters of travel distance. Thus, even though Ebola is not as contagious as the flu or a cold, it’s respiratory cloud may still spread in a similar fashion.

The Obama administration told the American people that a travel ban would do more harm than good. Ebola is now in New York City as a direct result of a passenger arriving from a West African nation that would have been on the ban list.

They also told us that CDC protocols and medical infrastructure were eons ahead of West African nations, yet nurses in Dallas have said that absolutely no preventative protocols were in place while Patient Zero Thomas Duncan was being treated. A couple of weeks later two health care workers who were in direct contact with Duncan fell ill with the virus.

The CDC, of course, will say that such a drastic move is unnecessary and may cause panic.

Right now, however, there are hundreds of random people in a metro area of over 20 million people wondering if they may have somehow come into contact with a doorknob, bowling ball, or taxi seat that may have been contaminated with Ebola.

Will America’s new Ebola Czar, who happens to be an advocate for population control initiatives, take action and finally issue guidelines to the American public about protective gear, social distancing protocols and preparing essential emergency supplies in case of a nationally declared emergency?

Will he explain to the American people what the government will do in a worst case scenario and how they may end up locked in their homes for weeks without the ability to go to a grocery store? Will he tell people that should that happen, they need to have at least a 30 day food supply because Uncle Sam won’t be making deliveries?

Probably not, because according to New York Mayor Bill De Blasio, there is nothing to worry about:

“We want to state at the outset there is no reason for New Yorkers to be alarmed.”

In a guide outlining some warning signs for when to start considering self-quarantine and lockdown procedures, Prepper’s Blueprint author Tess Pennington says that a key indicator to watch for is officials who claim they have the situation under control even though more cases are being identified.

Patient #4 is now confirmed. Within about three weeks (perhaps even as many as 6 weeks according to new research) we’ll know if anyone else has been exposed.

This virus is real. It has a 70% mortality rate. And it just made it’s way to America’s largest and most densely populated metropolitan area.

The Prepper’s Blueprint: A Step By Step Guide to Prepare for Any Disaster