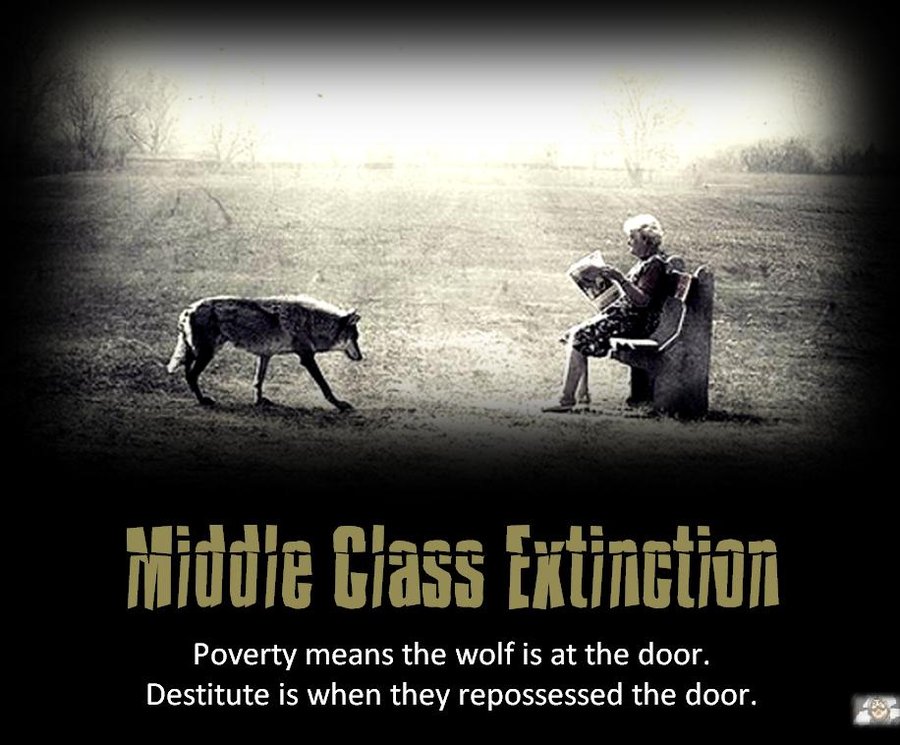 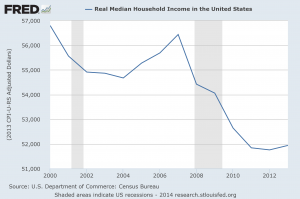 The Social Security Administration has just released wage statistics for 2013, and the numbers are startling.  Last year, 50 percent of all American workers made less than $28,031, and 39 percent of all American workers made less than $20,000.  If you worked a full-time job at $10 an hour all year long with two weeks off, you would make $20,000.  So the fact that 39 percent of all workers made less than that amount is rather telling.  This is more evidence of the declining quality of the jobs in this country.  In many homes in America today, both parents are working multiple jobs in a desperate attempt to make ends meet. Our paychecks are stagnant while the cost of living just continues to soar.  And the jobs that are being added to the economy pay a lot less than the jobs lost in the last recession.  In fact, it has been estimated that the jobs that have been created since the last recession pay an average of 23 percent less than the jobs that were lost.  We are witnessing the slow-motion destruction of the middle class, and very few of our leaders seem to care.

The “average” yearly wage in America last year was just $43,041.  But after accounting for inflation, that was actually worse than the year before…

Flat or declining average pay is a major reason so many Americans feel that the Great Recession never ended for them. A severe job shortage compounds that misery not just for workers but also for businesses trying to profit from selling goods and services.

Average pay declined in 59 of the 60 levels of worker pay the government reports each October.

And please keep in mind that “average pay” is really skewed by the millionaires and billionaires at the top end of the spectrum.

I don’t know about you, but those numbers are deeply troubling to me.

It has been estimated that it takes approximately $50,000 a year to support a middle class lifestyle for a family of four, and so the fact that 72 percent of all workers make less than that amount shows how difficult it is for families that try to get by with just a single breadwinner.

The way that our economy is structured now, both parents usually have to work as hard as they can just to pay the bills.

But there was one group of Americans that did see their incomes actually increase last year.

Those making over 50 million dollars had their pay increase by an average of $12.8 million in 2013.

For everyone else, the news was not good.

And of course this is a trend that has been going on for a long time.

Posted below is a chart that comes from the Federal Reserve.  It shows how real median household income in the United States has declined since the year 2000… 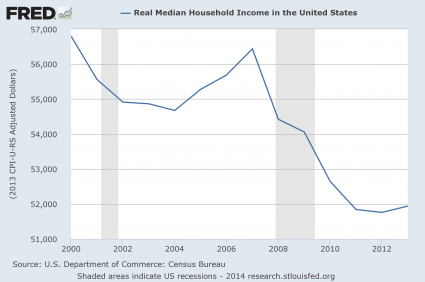 Meanwhile, the cost of living has continued to rise at a steady pace.

Needless to say, this is putting a tremendous squeeze on the middle class.  With each passing day, more Americans are losing their spots in the middle class and this has pushed government dependence to an all-time high.  According to the U.S. Census Bureau, 49 percent of all Americans now live in a home that receives money from the government each month.  This is completely and totally unsustainable, but our long-term economic problems just keep getting worse.

And at this point we are even losing lots of lower paying retail jobs.  For example, it is being reported that Sears plans to close 110 more stores and lay off more than 6,000 workers.  Sears says that the report “isn’t accurate”, but it isn’t denying that stores will be closed either…

In an email to USA Today, Sears spokesman Howard Riefs said the store count and closures “isn’t accurate,” but did not provide store closures or layoff numbers.

“As we stated in our (second quarter earnings report), we disclosed that we would be closing unprofitable stores as leases expire and in some cases will accelerate closings when it is economically prudent. And that we would consider closing additional stores during the remainder of the year,” Riefs said. “Make no mistake, we believe the store will continue to play an integral role in our transformation, however, if a store is not generating a profit, it is straightforward that the store should be considered for closure.”

No matter how many stores Sears does end up closing over the next few months, the truth is that our economy is a complete and total mess at this point.

Our politicians and the mainstream media are trying to put a happy face on everything, but the cold, hard numbers prove that we are not anywhere close to where we were prior to the last recession.

Because it is so difficult to find a good job in America today, I often recommend to people that they should consider starting their own businesses.

But thanks to the bureaucratic control freaks in the Obama administration and in our state governments, small business ownership in America today is at an all-time low.  It is almost as if they don’t want the “little guy” to win.  Every avenue of prosperity for the middle class is under assault, and there does not appear to be much hope that this will change any time soon.

And the truly frightening thing is that this is about as good as things are going to get for the middle class.  We are rapidly approaching the next major wave of our long-term economic decline, but that is a topic for a future article.