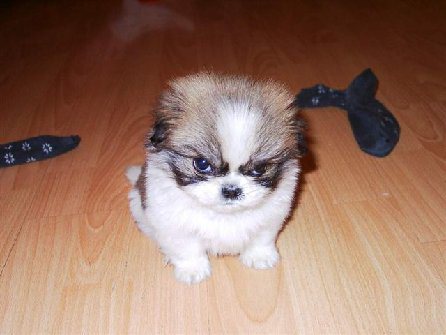 Have you wondered why Muslims hate dogs?

Here’s an explanation for why Muslims are forbidden to have a dog as a pet or allow one in their house. (H/t Mike Ramirez, a reader of DanielPipes.org, who has a website on Questionable Teachings of Islam.)

Answer: It’s in the Hadith — the corpus of the reports of the teachings, deeds and sayings of Muhammad. The Hadith was used in forming the basis of ‘Shariah’ Law and has had a profound and controversial influence on molding the commentaries on the Quran. Much of early Islamic history available today is based on the Hadith and is challenged for lack of basis in primary source material.

Chapter : Angels do not enter a house in which there is a dog or a picture.

‘Aisha reported that Gabriel (peace be upon him) made a promise with Allah’s Messenger [Muhammad] (may peace be upon him) to come at a definite hour; that hour came but he did not visit him. And there was in his hand (in the hand of Allah’s Apostle) a staff. He threw it from his hand and said: Never has Allah or His messengers (angels) ever broken their promise. Then he cast a glance (and by chance) found a puppy under his cot and said: ‘Aisha, when did this dog enter here? She said: By Allah, I don’t know He then commanded and it was turned out. Then Gabriel came and Allah’s Messenger (may peace be upon him) said to him: You promised me and I waited for you, but you did not come, whereupon he said: It was the dog in your house which prevented me (to come), for we (angels) do not enter a house in which there is a dog or a picture.

Then on that very morning he [Muhammad] commanded the killing of the dogs until he announced that the dog kept for the orchards should also be killed, but he spared the dog meant for the protection of extensive fields (or big gardens).

Allah’s Apostle [Muhammad] said, “If somebody keeps a dog, he loses one Qirat (of the reward) of his good deeds everyday, except if he keeps it for the purpose of agriculture or for the protection of livestock. “

So the Hadith would have us believe that an Angel of God, Gabriel, refused to enter Muhammad’s house because a puppy — a creature of God — was there? And that’s why Muhammad commanded that all dogs be killed?

The truth is that when the “angel Gabriel” first visited Muhammad, this “angel” physically assaulted Muhammad, leading Muhammad to think the “angel” to be a demon.

The angel came to him and asked him to read. The Prophet replied, “I do not know how to read.

What angel of God would physically and repeatedly assault (“pressed me so hard that I could not bear it any more”) a man, rendering him cowering and fearful? Muhammad’s account contradicts every account of angelic encounters in the Bible.

That was no Angel Gabriel. It was a demon.

In fact, the earliest biography of Muhammad, Ibn Ishaq, stated Muhammad thought he was demonically possessed.

See also “Was Islam’s founder Muhammad a real man or an invention?”