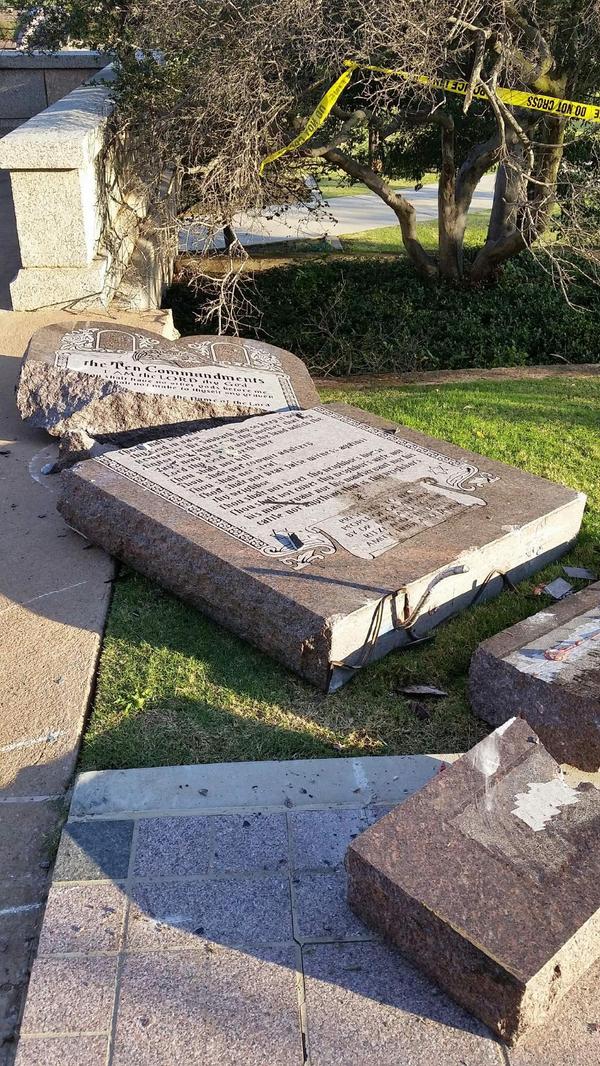 There is a ferocious spiritual war in America, and Oklahoma City seems to be at the center, targeted by malevolent people and forces.

In 2009 when Republicans were in control, the state legislature gave the green light for a Ten Commandments statue, paid for with private funds, to be placed outside the state capitol building in Oklahoma City.

Three years later, in November 2012, a 6-feet tall granite monument of the Ten Commandments was erected.

Almost immediately, the American Civil Liberties Union (ACLU) leveled a lawsuit to remove the monument, claiming that it violated the state constitution’s ban against using public property to support church or religion.

The ACLU’s lawsuit was followed by the New York-based Satanic Temple declaring their intention to build a 7 ft. tall statue of their master next to the Ten Commandments — all in the name of “religious parity.”

Then, on September 21, 2014, a local satanist group conducted a blasphemous “Black Mass” right smack in the Oklahoma City Civic Center.

Three days after the satanic Black Mass, on September 24, 2014, a recent convert to Islam, 30-year-old Alton Nolen, walked into a Vaughan Foods administrative office in Moore, a suburb of Oklahoma City, and attacked two female employees with a knife. Nolen beheaded Colleen Hufford, 54, and repeatedly stabbed Traci Johnson, 43, who survived the attack. (See “Of course he did: Obama Official Praises Mosque Of Oklahoma Beheader Alton Nolen”)

Mark Vaughan, the company’s chief operating officer, who is also a reserve sheriff’s deputy, shot Nolen, stopping the attack. Nolen was charged with first-degree murder and assault and battery with a deadly weapon, and may also face federal charges as well.

Writing for CNN, Mel Robbins is incredulous that the FBI refuses to call Nolen’s attack and beheading a terrorist attack:

It was a terrorist attack, and everyone knows it. Why won’t the government say so? The Washington Post reports that the FBI found ‘no indication that Alton Alexander Nolen was copying the beheadings of journalists in Syria by the Islamic State … adding that they are treating this as an incident of workplace violence.’

Workplace violence? You can’t be serious! Oh wait — the FBI must mean “workplace violence” as in the case of Maj. Nidal Malik Hasan,the terrorist convicted in the 2009 Fort Hood shooting that killed 13 people and left many more wounded.

On September 19, 2014, the ACLU’s lawsuit to remove the Ten Commandments monument was thrown out by an Oklahoma County judge.

So satanists took matters into their own talons.

Zak Patterson reports for Oklahoma City’s KOCO that at approximately 9 p.m. on Oct. 23, 2014, a man drove his car into the Ten Commandments monument and smashed it into pieces.

The suspect told the Secret Service, upon his arrest, that Satan had told him to do it. He admitted that he had urinated on the monument before running it over.

The suspect reportedly also made vague threats at the Oklahoma City Federal Building and said he would kill President Obama and spit on a photo of Obama. The man was taken into custody. The vehicle involved was abandoned and has since been impounded.

The cleanup is underway and parts of the Ten Commandments monument will be restored.

The ACLU of Oklahoma made this statement following the incident:

“The ACLU of Oklahoma and our clients are outraged at this apparent act of vandalism. While we have and continue to seek the removal of the Ten Commandments monument from the Capitol grounds through the judicial process, the Ten Commandments constitute a strong foundation in our clients’ deeply held religious beliefs. To see the Ten Commandments desecrated by vandals is highly offensive to them as people of faith. Our Oklahoma and Federal Constitutions seek to create a society in which people of all faiths and those of no faith at all can coexist as equals without fear of repressions from the government or their neighbors. Whether it is politicians using religion as a political tool or vandals desecrating religious symbols, neither are living up to the full promise of our founding documents.”

The police have since identified the man asMichael Tate Reed Jr., 29. He is from Roland and was taken to Oklahoma County mental facility for an emergency order of detention and a mental evaluation.

Reed’s mother, Crystal Tucker, said her son “would never deface something that meant so much to him. He takes the Ten Commandments very seriously.” Tucker said Reed has been battling breakdowns for two years ever since he was injured at work four years ago. (See “Psychiatric nurse says half of patients have a spiritual affliction”)

Tucker said when her son “has these breakdowns, the one thing that is foremost in his mind, his religion, is the thing he takes it out on.” But Reed does not worship Satan, the mother said. “Anyone who knows Michael, knows he loves his God. Right now, everyone is praying for him.”

Well, mom. I suggest you ask your son who “his God” is.